Ok so it is obvious that I enjoy writing. I have always had some sort of note pad or notebook with me writing down anything and everything that flies through my mind. I have been able to write all kinds of fun things on this blog and I was super excited to be invited to write occasionally for Nerd Society. I have also been having a blast writing with other fellow bloggers from the League of Extraordinary Bloggers. Now I am also participating in another experience that is similar to the League in that this really fun blog called Nemesis Complex has a Blog Collective wherein other fabulous bloggers contribute to a weekly topic. I feel like I am never going to be short for ideas on what to type about for now! (I was worried about a year ago that I would be running out of topics to talk about.)

So get ready to click on for a new topic, and in case you were wondering what happened to the latest chapter of Adora's Search for Honor, have no fear. I am almost finished with it and will hopefully post it tomorrow. It is difficult to get a new chapter typed up and polished every weekend. Especially when it is a busy weekend. I was in charge of cooking a meal for my dad on account that my mom was out of town. Me cooking? I was living on a hope and a prayer. Thankfully no one got sick.


So the topic from the Nemesis Blog Collective this week was on remakes. There is a lot to love or hate about remakes. And if we have learned anything this past weekend, it is that we are totally down for remakes. I am thrilled that Man of Steel broke some box office records. It would seem that this was a very successful reboot/relaunch/remake. Those 'remake' words are interchangeable. I would even go as far as to say that sequels are in some ways very much like a remake. All it amounts to is a studio trying to capitalize on recapturing something special in a movie or television series. I like it when remakes work, and goodness knows when they bomb, they really bomb.

Anyways, one of the things I really got to thinking about in terms of remakes is My Little Pony. Now there is a reason why I was thinking about MLP. I had found some older Ponies that I had growing up but that were played with by my brother, so I never really thought about bringing them home with me. He loved them when he was younger, now he could care less. So I brought them home with me and treated them to a nice trip into the sink spa. 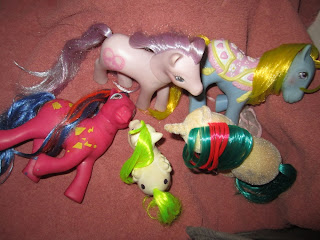 So as I was getting these ponies ready for the Archival Room I couldn't help but think how MLP has evolved and how the current remake of the cartoon series has just taken off. For the last couple years now, My Little Pony Friendship is Magic has become a crazed piece of fandom sparking rabid love from kids to grown folk. The series also crosses gender lines as women and men both find something to enjoy from this series.

When this latest incarnation of Ponies came out in stores, I had to pick some up. I have always picked up a few ponies from every new generation that comes out, but there was something about this latest line that just felt like the original. What I expected to be just a fun little line with some nostalgic roots, has actually become a series and line that just works. It somehow works.

I don't always watch the show, but I took it upon myself to watch some of the show to see just why it was such a runaway hit. I mean when men are jumping on board calling themselves Bronies, there has to be something going on. After watching the show I was able to understand just why there is such a devoted fan base. There are all kinds of humor and pop culture Easter eggs in the episodes, plus in some cases the show takes what was good about the original series and really goes for broke.

The wedding episode of Shining Armor and Princess Cadence is a prime example of that. In the beginning the two episode arc seems to start off with way too much sweet excitement about the royal wedding. It was like being super girly on acid. I don't know how else to put it. And then it just takes a sharp turn into evil awesomeness that reminds me of the original episodes where the Ponies would have to fight against evil forces. It was certainly entertaining. Cutesy, but entertaining. And thank goodness I like cutesy. (Who am I kidding, I like most everything. It's why I fear being on Hoarders.)

So since this remake on a venerable line worked, I also got to wondering about other things that have been remade, maybe not so successfully, but that could take a page from this latest MLP series. I would really like to see Rainbow Brite have a nice cartoon remake. And not just Rainbow Brite, but all of her friends. I think the problem with the last version of Rainbow Brite was that they updated her with only two friends. Where's the love? I want to see all the Color Kids back in action too. There were a lot of sci-fi/fantasy elements with Rainbow Brite, as surprising as that might sound, and I think a fun new remake could really re-energize her while also giving fans what they have long wanted: a proper remake.

That's about it for remakes. They happen all the time and with just a little bit of love and care, they can be awesome. Be sure to check out Nemesis Complex and the Blog Collective. Ben owns the site and he is a really nice guy. So check it out!

And be sure to check back here tomorrow! Toy Chest Tuesday will be moved next week, but there should hopefully be that new chapter for Adora's Search for Honor! There are only two left, how can it all possibly end? Anything can happen!