These Bootlegs Are Made for Walkin'

And that's just what they'll do. One of these days these bootleg toys are gonna walk all over you...

This week's topic for the League is a tough one. The topic is:

Is there anything in my archival room that will suffice? Read on and find out...


Let's see, how do I begin... I don't like bootlegs, knockoffs, or third-party products when it comes to toys, or really anything else for that matter. I don't know why, but I just never got into them. I always felt like I was settling, like I couldn't get the real thing, so I settled for a lousy imitation. "I went to the dollar store and all I got was plastic poisoning from a cheap knock off." Ya know?

I remember once when Power Rangers were just becoming scarce in stores, my brother and I stumbled upon some really bad Power Ranger knock-offs at the dollar store. We got the pink and yellow rangers, and I just felt like it was so wrong. They had male chests. Trini and Kimberly had apparently pumped up on steroids. Of course, there were actual Bandai sanctioned Power Ranger toys that featured the girls with manly chests too. What could ya do? It was the 90's. Le sigh.

Anyways, we so desperately wanted to have something from all the mass hysteria that was ensuing over these damn Power Rangers. My brother would eventually move on to the real thing, but I somehow held onto my total rip off. The articulation was terrible. The plastic had a strange slimy feel to it, like I was somehow being exposed to radioactive properties. What was meant to be something fun and exciting was just such a let down. Here's the bootleg Pink Ranger: 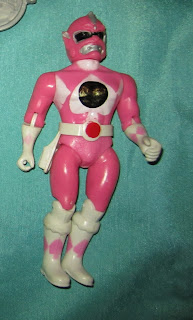 I haven't always been a stuck up bitch regarding bootlegs and what-not. There have been times where I have felt a certain respect for a good bootleg or knock off. Take for instance Golden Girl released by Galoob back in the 80's. I know this may be hard to believe, but once upon a time there were a few toy lines in the pink aisle that were all about warrior women (Golden Girl, Goddess of Wonder...) She-Ra certainly paved the way for quite a few toy lines that wanted to cash in on all that sword wielding power.
Golden Girl was one of the lines that actually had some slight competition with She-Ra. (I say slight, but let's be real, there was only one She-Ra.) Anyways, Golden Girl was interesting, because the action dolls had rooted hair and cloth capes, but they were made more like a He-Man figure. They looked like warrior wrestlers. Check out some of the offerings from the line. (These photos and more Golden Girl info can be found on Ghost of the Doll.) 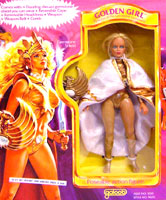 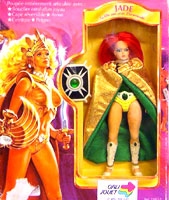 Next up is Kimber Benton dressed as... Oh wait, this is Jade. 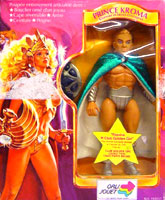 Prince Kroma with his krome chastity belt helped Golden Girl and her friends. 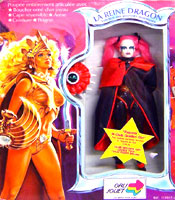 Dragon Queen was the main villain. (What a name, right?) 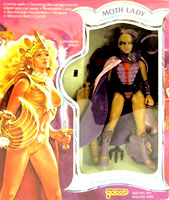 There were quite a few villains, including Moth Lady. (This is who I become in the future.) 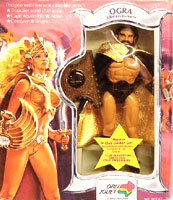 And there was a male villain too by way of Ogra.
There were actually more characters, horses, fashions, and play sets. This was truly a knock off line of She-Ra, but it was all done in a very inventive way. I vividly recall this line in stores. There were a few times where I nearly added one or two to my collection back then. I just couldn't though. It was like Golden Girl was that bad girl that smoked cigarettes and used Xanax in the school bathroom. You wanted to hang out with her and be wild and crazy too, but you just knew it wouldn't end well. Know what I mean?
However, there would be a strange twist of fate that would grant me the presence of a Golden Girl in my life. A few years ago my dear friend Patrick had a surprise birthday gift for me. Now he was so proud because in his words, "I have found an awesome gift for you. I think I may have found the lost She-Ra doll you've been looking for."
I immediately thought of Glimmer, only it wasn't Glimmer. It was Golden Girl. "Where did you get this?" I asked full of curiosity. I mean, who has Golden Girl dolls for sale? His reply, "I went to a comic store looking for a She-Ra doll, and they said they had one She-Ra doll in store." I could only shake my head, "I love this. I truly do. But this isn't She-Ra. You were robbed. This is a She-Ra bootleg named Golden Girl." He thought I was making something up. We all had a good laugh and he couldn't believe that there was actually a few items for sale like She-Ra back in the day. This is when I realized that bootlegs and knock offs can actually be a really good thing. This loose Golden Girl gift was a reminder that at one point in history She-Ra was popular enough to have imitators. I miss those days. Now it seems like all that is left are people getting into fights over the inclusion of She-Ra items in the Masters of the Universe Classics line. (I admit, I do sometimes speak up a lil too much. Ya gotta love me though, right?)
So that is my take on bootlegs and such. Let's see what other members of the League are talkin about this week:
-Rich introduced me to some third party Super Heroes
-Jason is rediscovering when Street Hawk was a part of G.I. Joe
-Christopher shares in his bootleg collection
-The Goodwill Geek talks the father of all bootlegs
-Brian looks up in the air and finds... cardboard!
Be sure to check back at Cool and Collected for more member's topics and be sure to stop by Ghost of the Doll. That site is a treasure trove of girl's toys.
I hope all is well with you all, and as usual, I have some more fun stuff coming up. Take care!
Posted by Michael Lynn P. at 12:26 AM