Since I have been only slightly behind with things, I thought we could all use a little vintage toy celebrating with an all new trip into the archival room! Today we are looking at yet another piece of Rose Petal Place awesomeness! Read on for more!


Ok so I wrote a little while ago about my tentative footsteps into the world of loose collecting. I used to stick my nose up to the idea of collecting loose items. I felt like I'd be taking on a great deal of emotional and cosmic baggage. I firmly believed that owning loose toys would be a very similar experience to that of living in a haunted house or something. I was clearly in the wrong on this one, and I must say loose collecting is a great deal of fun. Especially when I find some really nice items for real cheap. So I recently wrote about Rose Petal Place dolls, and essentially they were sweet smelling dolls that reeked of designer impostor flower perfume. They were made by Kenner and were rolled out like Strawberry Shortcake. However, the biggest distinction was that the Rose Petal Place gals didn't stick around as long as Strawberry Shortcake. Which is a shame.

Anyways, growing up I had a half cousin that had some Rose Petal Place dolls. She was technically not a half cousin, I don't think you can have a half cousin. Her uncle married my aunt, so I don't know that any of that means we are related, but I adored her. She was a few years older than me and I just thought she was the coolest person ever. We both had an affinity for cool toys and one such toy she owned was Orchid, the social climber of the flower garden. Let's look! 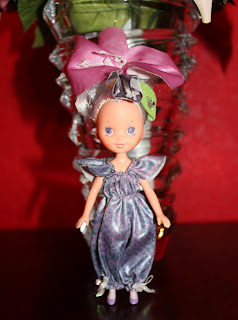 I loved, loved, loved Orchid. She was a power shopper and it showed. She had a very extravagant hat and her jump suit just screamed high tacky fashion in the best way possible. This doll was always just super fun for me. (This is not the doll my pretend half cousin owned, I came across this one on eBay for a song.) 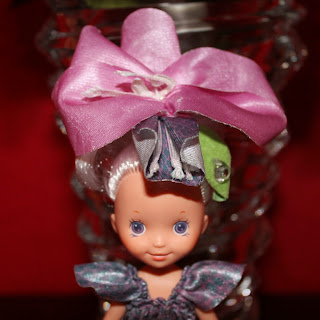 Look at that hat! As I have mentioned before, I am not really a hat person (I know, strip me of my Southern Belle Street Cred) but I just think this hat is the best. It looks like a pretty flower bloom. I also liked the height of these dolls. They were around 6 inches, which is perfect. 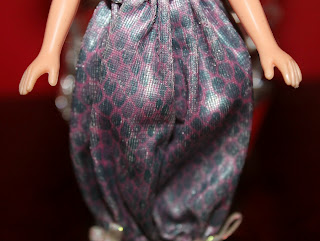 Here is the detail on her jumpsuit. The print looks like it could be petals or a festive snake print. I have just always liked the look of this doll. In all honesty I feel like Orchid and I are cut from the same cloth. Shopping does make the world a better place. 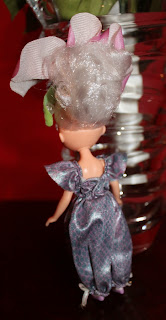 The back of the doll shows off a scooped back with the jumpsuit and some white hair. Depending on the light the hair almost has a very faint purple to it, but her hair color is just a really nice contrast to the rest of the doll's coloring.
I remember begging my mom to help me hunt this doll down in stores after noticing my pretend half cousin's Orchid. We could never find her in stores. I think I ended up with a Moondreamer instead, but that is a whole other post in and of itself. I do remember though that my pretend half cousin had let me borrow her Orchid doll for a day. That was just such a nice thing to do (and truthfully I don't know that I could ever be that nice.) But, here we are though. Years and years later, I finally found a way to get my very own Orchid. This loose collecting bug has certainly bit me and I must say I feel like I have begun to experience collecting in a whole new and different way.
I hope you are all doing well. I am off though. My brother and I are currently going throughout my parent's house and just piling up a massive amount of stuff to sell at a garage sale. I told him we need to treat this like our parents are no longer around and we are having an estate sale. It's a lot. But, stick around, I've got a fun post coming up for the League of Extraordinary Bloggers and I am going to write about an event I attended this past weekend. My friend was a part of a doubles performance for this Melee Kickoff event with some of the most talented polers/aerialists I have ever seen. It was truly a kick ass experience and I will be sharing it with you all!
Posted by Michael Lynn P. at 10:27 PM