Toy Chest Tuesday is all new and in keeping with the themes of the League of Extraordinary Bloggers from this past week and this week, (dreams and nightmares) I thought it would be fun to check out a little line called MoonDreamers! I will be posting about nightmares later on in the week, but for now, let's look back at MoonDreamers!


MoonDreamers were brought to us by Hasbro in 1986. A doll line that was associated with a cartoon, MoonDreamers followed Crystall Starr as she and the other MoonDreamers helped bring nice pleasant dreams to the children of Earth. The cartoon and line was really fun, it involved a great deal of space and the stars as the MoonDreamers got to work during nightfall. There was an impressive cast of characters each with their own unique looks, but today we are going to look at Bitsy and Roary. 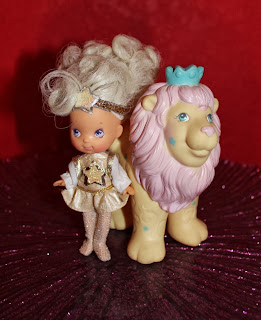 Bitsy and Roary came together in a two pack. According to MoonDreamers lore, Bitsy was a younger character sort of in training to become a MoonDreamer. As such, she tended to get in the way of the other's work. She rode around on her flying lion, Roary. 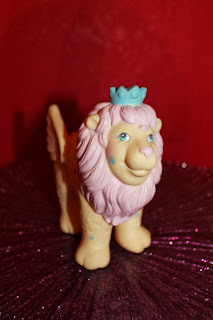 Do not adjust your screens, Roary is indeed a flying lion. Made of soft plastic, Roary is a vision in pastel yellows, pinks, and blues. I freakin love this thing. Who wouldn't want to know a flying lion? Especially a flying lion that can fly throughout the galaxy. 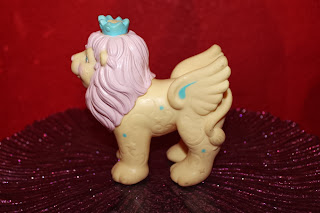 There is an interesting etched swirly design across Roary. He also sports wings over his back hips. 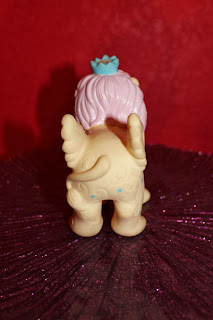 The back of Roary shows off a more visible space on his back that is used as a seating space for Bitsy. 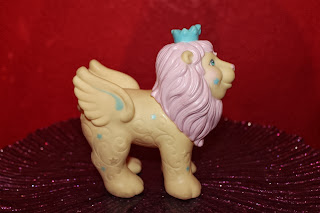 Here's the other side. Pay close attention to all the blue stars and crown. The real special thing about MoonDreamers was that they glowed in the dark!!! So essentially, any blue coloring on Roary glows in the dark. The stars just glow like you are looking up at the stars! 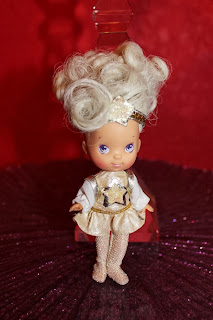 Here is Bitsy. She was a little shorter compared to the regular sized MoonDreamer dolls, but she featured similar points of articulation at the neck, shoulders, and hips. The legs and arms were made of a softer plastic. I recently purchased this Bitsy and Roary loose on eBay, so there are a few items missing, like her shoes, comb, and stand. However, for a loose item, she looks pretty good! Her hair needed some work, but my styling skills at the Sink Spa got her looking great in no time. 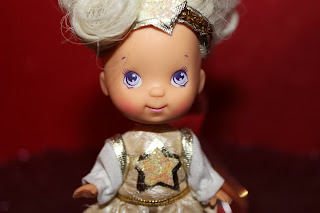 Each MoonDreamer doll had some fun extras. Their eyes had shapes of moon and stars. This can be slightly annoying for some collectors, as their eyes can sometimes look wonky due to the different shapes. Also, the dolls had belly buttons in the shape of a star! Is that not the cutest thing? Are you suffocating yet from all the cuteness? (Please don't suffocate from the cuteness.) I don't have a picture of the star shaped belly button as it was difficult to capture with my camera, needless to say though, I wish my belly button was in the shape of a star. 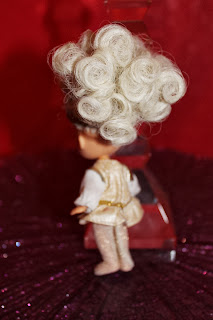 Bitsy has some massive curls! The texture of the hair is a bit dry and crunchy feeling, but there is a reason behind this. Her hair glows in the dark. Like Roary and all the other MoonDreamers, Bitsy glows in the dark! The hair as well as the star on her chest, the star on her headband, and a little moon by her waist also glow in the dark. I can't express how much I wish my hair could glow in the dark. I just feel like my life would be complete with glow in the dark hair. I have also failed miserably at capturing some images of these items with their glowing features, but have no fear, I am going to figure something out and post it for the second part of MoonDreamers next week. 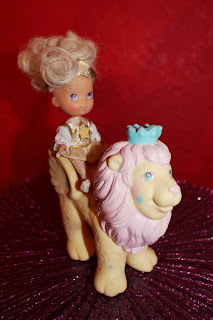 Here's Bitsy ready to ride along with Roary throughout space. I really wish I had collected more of these. Growing up I only had a couple, but there were so many interesting and cool characters all with shiny clothes and hair that glowed. Oh the 80's was truly a magical time to be an Earthling.
That's about it for this week's Toy Chest Tuesday! I know there has been an influx of girl toy talk on here, but don't worry. I'll be talking about some more boy friendly fare eventually. Enjoy the pictures and stick around, there's always something fun right around the corner.
Posted by Michael Lynn P. at 9:40 PM