Ok so the nightmare of my parent's garage sale is over. I'm still trying to get their house back to normal, but all is well with the universe because it is Tuesday! Toy Chest Tuesday! Read on for part two of my look back at MoonDreamers!

So last week we looked at Bitsy and Roary from the short lived but highly lovable MoonDreamers line, but this week I think it best that we look at the more evil side of MoonDreamers. One of the best things about girl toy lines from the 80's was that companies weren't scared to have really fun villains included in the line to accompany the heroes. Now-a-days it just feels like most toy lines on the pink aisle tend to shy away from a deliciously cool villain. MoonDreamers was far from lacking in imaginative characters, but their take on a villain was just something else. Let's look! 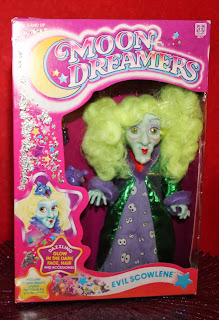 Here we have Evil Scowlene the vicious villain of the MoonDreamers and the children of Earth! I really love that it was quite common place to collect old people as villains from various toy lines in the 80's. How cool is it that this cute little toy line had some kooky elderly grandma villain as pat of the line? I love it! It all gets even more sordid though. On a side note, I really do love this packaging. It is hard to tell, but there are flecks of glitter glued to the side of the box. The glitter is meant to mimic stardust, but it all lends itself to a homemade art project feel that I love. I feel like I could have created this at my craft station. 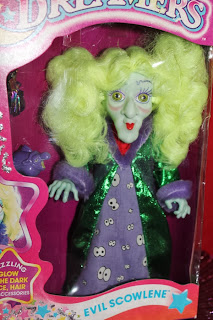 Here is a closer look at Scowlene. Her name alone just sounds so cool. She was obviously much taller than the regular MoonDreamers dolls, and she even came with some cool accessories! 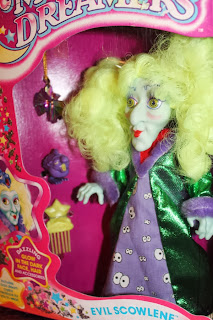 On the inside of the box, Scowlene's bad dream crystal necklace is visible as well as Yawny (more on that little critter in a second) and a hair pick. Other items that also came with Scowlene included a yellow stand, instruction sheet, and a pamphlet full of the other MoonDreamers items. 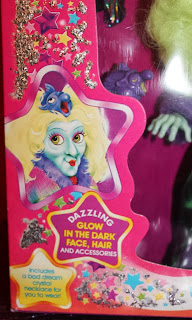 The artwork on the box looks very nice. I love all the stars and sparkle. It just looks so cool. Also, the larger star lets the customer know that Scowlene's face, hair, and accessories glow in the dark. That's right, her face glows in the dark! I've tried my best to capture an image of this, but my camera was unable to. I will explain though a little later on about what she looks like in the dark. 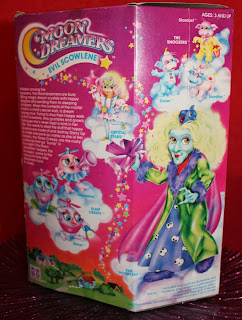 The back of the box is a bit more nontraditional compared to other toy lines. There are no images of the other items for sale. Instead there is some pretty artwork that shows off a wide variety of characters that are mostly creatures. There were a ton of human characters to collect, but only Crystal Starr appears from the human doll side. 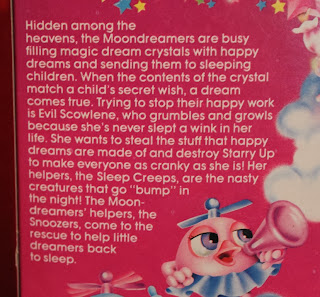 A brief bio details just why Scowlene is so evil and what her motives are. I love that she has never been able to sleep a wink in her life and that her only goal in life is to make everyone cranky. That is a villain to be weary of. She doesn't care about ruling the world or kidnapping anyone, she just wants to make everyone as miserable as she is. I love this. 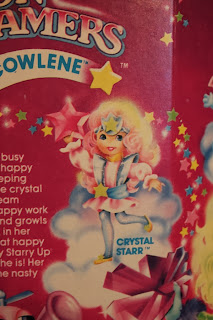 I love the images on the back of this box. Crystal Starr's hair looks like cotton candy. This was such a crazy toy line because the MoonDreamers were these cute kids with their shiny outfits and colorful glow in the dark hair, but then there were these creepy characters... 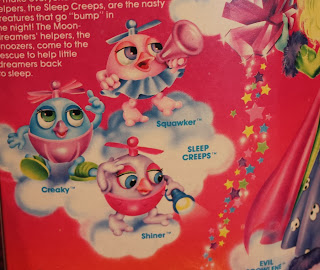 ...like the Sleep Creeps. They looked like giant gumballs with limbs, but these Sleep Creeps were far from innocent. They were the creatures that go "bump" in the night. I realize that they don't look all that scary, but I'd be freaked out if I saw one. Each one had a purpose too. Squawker kept kids up with blaring noises, Creaky made the night creak and grown sounds (think a haunted house) with his footsteps, and Shiner was the little shit that flashed lights in the dark to wake people up from a nice slumber. 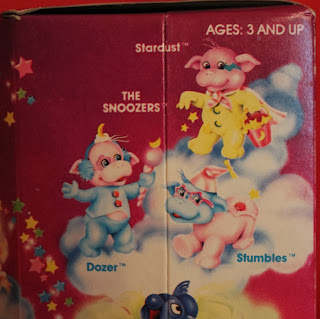 The Snoozers were helpful creatures of the MoonDreamers that essentially counteracted the nastiness of the Sleep Creeps. Stardust sprinkled stardust in children's eyes to help them sleep. (I guess that explains eye boogers...) Dozer used his ear muffs to drown out loud noises while Stumbles had powerful sunglasses that blocked out any pesky unwanted light. 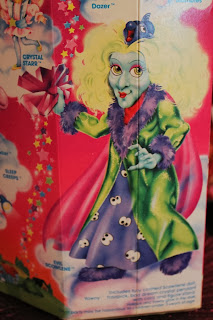 Here's the Evil Scowlene. She doesn't look that evil in this picture. If you squint and look close enough, Scowlene looks like she is Pizzazz as an old woman. Wouldn't that be divine? Pizzazz grows old and finds ways to keep everyone awake because she is cranky. I could see that as a plausible story. 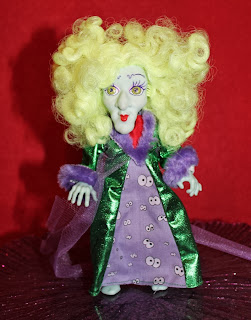 Here we have a loose Scowlene. This was mine from my childhood. I realize I am very fortunate to still have the opportunity to own most of my vintage toys. The sad thing is that my Scowlene is in perfect condition but she is missing her stand and her fuzzy purple slippers. She wears a fun gaudy robe. Her face, hair, and all the eyes on her robe all glow in the dark. It is an impressive look. 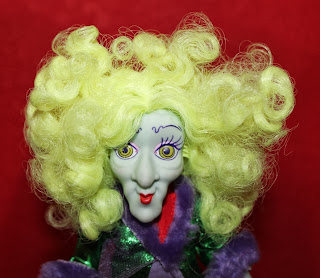 The swirly design in her eyes just screams, "I haven't slept in decades." I am proud that her hair has aged well, but she does sport some massive curls. The sculpt of her face looks amazing and the face paint is also really cool and creepy. 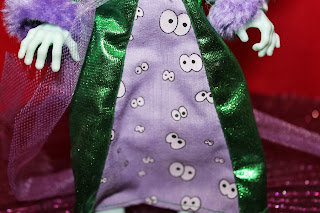 Gnarled hands complement a robe that has eye balls all over it. I feel like these are supposed to be nightmares or Sleep Creeps, but I don't recall what they are. I just know that the eyes glow in the dark and it looks so cool. 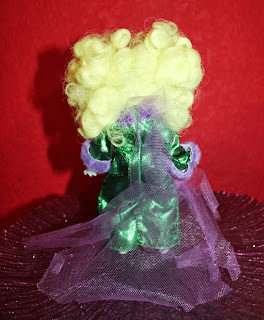 The back of the doll features nice purple netting that doubles as the perfect cape. 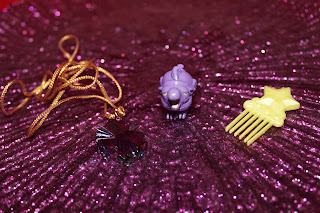 Here are her accessories. The bad dream crystal necklace is really pretty, although in hindsight it blends in a bit much too much with this glittery surface. In the middle is Yawny, a creature that lives in Scowlene's hair and pinches her in the head. So let me break this down. Scowlene essentially has lice, and the lice has been keeping her awake all these ears. I'd be cranky too if I had a bed bug living in my hair! Yawny's eyes and mouth glow in the dark. Her slim hair pick has a big star at the top and glows as well. 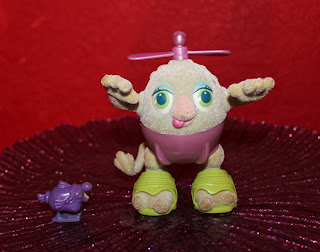 Here's a side view of Yawny standing next to a Sleep Creep. His feet are made to act like a hair comb. The hair bed bug slides in easily enough (thanks in part to her massive curls.) The Sleep Creep next to Yawny is Creaky! Creaky is flocked and the flocking has held up really well. The top spins and he has articulation at the arms, legs, and tail. His shoes can also slide off. Oh, his shoes along with the whites of his eyes glow in the dark. Even though he is evil, he is kinda cute. 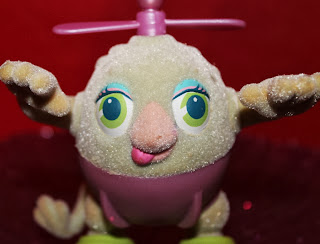 I mean look at that face! How could you not think this face is cute? 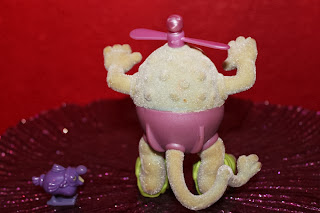 The back is a slight different story though. The tail looks grody and he has bumps on the back of his head that look strange. Like maybe they are bite marks from Yawny. Or something. 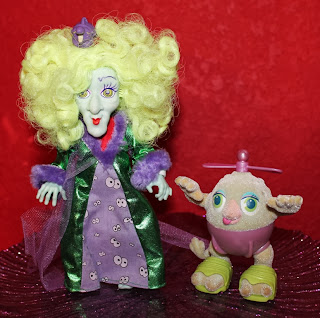 Here they are together! Look at how perfect Yawny is, right at home on old Scowlene's head. I can't express enough at how awesome these toys were back then. Even now, almost 30 years later, this is a toy line that just has enough quirky charm to be cool forever. So enjoy the conclusion to this two part Toy Chest Tuesday. I hope to acquire more MoonDreamers in the future and maybe write about them again. That's about it. I hope you are all doing well and before I go, I leave you with some more Yawny. I just can't get enough of toy head lice: 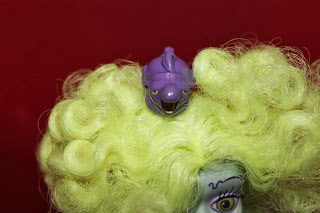 "Don't confuse me with the New Age singer who shares a similar sounding name. The only thing we have in common is our love for big hair. Munch. Munch."
Posted by Michael Lynn P. at 9:08 PM