Who watched Wrestlemania last night? For as long as I can remember my dad has gotten Wrestlemania on Pay-Per View every year. It has been a family tradition, even when my younger brother and I were slightly rolling our eyes at yet another event. However I always enjoyed the earlier Wrestlemanias, particularly the events featuring Miss Elizabeth. She was always my favorite, and though she could never be replicated, I wish there were classier women in Wrestling right now. Oh well, I am old. What the hell do I know?

So last night as I was watching all these men wrestling in tiny speedo wrestling shorts something hit me. We are in April! A brand new month, which could only mean one thing, some fine gentleman needs to be crowned Heroic Hottie! I was dead set on featuring a pilot and his robotic lion, but I decided to go in a different direction... so drum roll please... April's Heroic Hottie is... Fantomex!!!

If someone is raised in a virtual France, are they still considered French? I will pretend so, in which case, Fantomex is one mysteriously fine Frenchman. A former experiment from the Weapon Plus program, Fantomex has now found somewhat of a home with the X-Men's secret team, X-Force. Unfortunately he declined for an interview. Word on the street is that he was kidnapped by Captain Britain and put on trial for crimes against the universe. He may also be missing his face thanks to the Skinless Man. Just a regular day in the mythical realm of Otherworld! Hope he'll be ok!

Luckily for us, he was able to participate in a brief photo shoot! Courtesy of Hasbro, Fantomex has never looked better. It is as if he jumps right off the page! 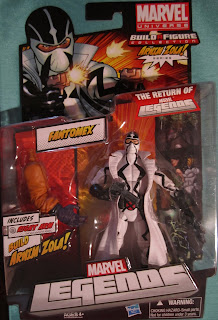 Since Fantomex was unable to give an official interview to DiaryofaDorkette, there were people working the shoot that had all kinds of inside scoop. For example one setsider had this to say, "Fantomex was very kind and generous, but he was a bit boastful that his recent collaboration with Hasbro would be the reason that the Marvel Legends line would continue until 2023." 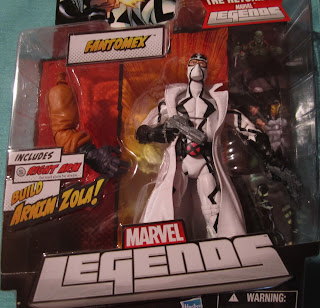 Some of the food that was catered for the event involved Sour Patch Kids and Bubble Gum ice cream, to which Fantomex was heard saying, "No one must ever know about this, but damn is that ice cream good! They never had this in virtual France." 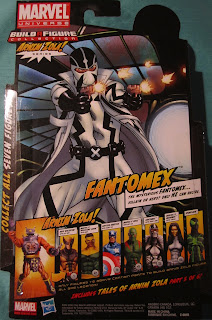 Rumors swirl around Fantomex and his loyalties; is he a hero? Or a villain? The photographer had an idea on the subject, "I don't think he is bad, maybe slightly misunderstood. Though he isn't very fond of Emma Frost. Oh the stories he had about her!" 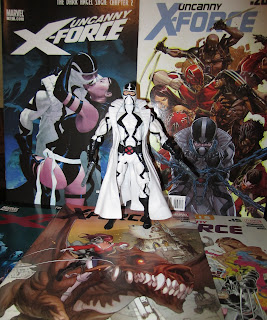 The stylist for the shoot was so thrilled, and oozed compliments, "He brought his own clothes to wear. He said he felt comfortable in his own duds. He also refused to pose with toy guns." Sounds like he keeps it real. The make-up artist actually got to leave early, "He refused to show his face. I had nothing to do. There is just something so sexy about a guy who wants to hide his face. You can't help but wonder what is underneath the mask." Sounds like he is following in the footsteps of other sexy masked greats, Batman, Michael Myers, and Kiss. 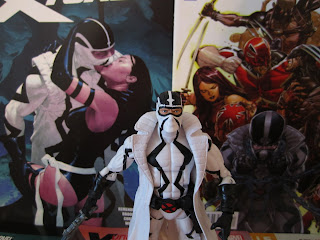 Another source, who wished to remain anonymous had this to say about any potential romances, "I think he is dating one of the stars from Desperate Housewives. He kept talking to someone with, I think, a code name of E.V.A." Could Ms. Longoria be dating the problematic man who also goes by the name Jean-Phillipe? Not so says an associate close to the hero, "Fantomex is currently single, however he has his eyes on one of his co-workers, and I'm not talking about Deadpool." Oh the drama! 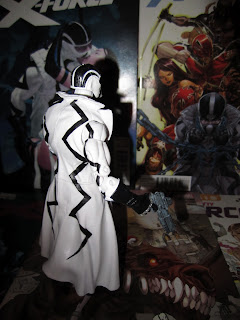 All in all everyone behind the scenes had nothing but delightful things to say about Fantomex, even if it has recently come to light that he is on trial for murder. DiaryofaDorkette will keep you all posted on any new developments to the story. For now sit back and enjoy the drool worthy photos of April's Heroic Hottie!
Posted by Michael Lynn P. at 3:53 PM