Marketing is an important tool to help sell just about anything. Some people believe that for fast food restaurants, the toy at the bottom of a Kids Meal is only meant to be the marketing prize for more food sales and profits. For other, more dorky folk, the prize at the bottom of the bag can feed a collecting habit that rivals that of anyone found on an episode of Hoarders. The food is just an extra bonus. Throughout the years the fast food giants have come up with clever marketing strategies to brand their Happy Kids Meals. McDonalds had Ronald and his eclectic group of friends. (Wouldn't it be something if the pink slime was actually pieces of Grimace? Like maybe the Hamburglar was cutting off pieces of Grimace and slipping it into the meat? I smell a gritty and delicious graphic novel in the making.)

Anyways, not to be outdone, Burger King came up with its own plan to breathe life into the Kids Meal. Instead of mystical McDonalds creatures, Burger King gave us a group of diverse kids that were do-gooders and loved to eat the heck out of some Burger King. These kids were on everything. They helped usher in the latest Kids Meal toys. There was a fan club and even commercials. Of course there were also specific toys made to support these new characters. Growing up my brother and I were hooked.

Let's get to know some of the BK Kids, shall we? 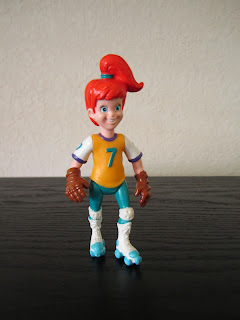 Up first was my favorite BK Kid: Boomer. Now I have never been one for sports, but I always liked that she was ready for any and every sport out there. She was the tomboy of the group and though I have never considered myself a tomboy, I do realize that being an avid collector of toys, dolls, and super heroes is not something that most grown women do. Even growing up I knew that I was in the minority on that issue, so Boomer sort of represented that spirit of just doing what you want to do. Regardless of what is expected from you. This version of Boomer was one of the first series of BK toys that helped promote the new Kids Club marketing plan. Her arms, legs, and head were articulated. 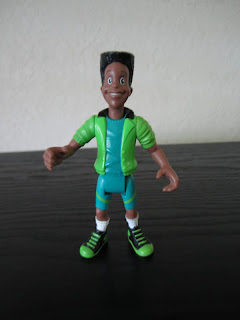 My favorite male character was Jaws. First of all, out of everyone, he was the best dressed. But the reason I really liked him was that he had a big addiction to BK cheeseburgers. All the BK Kids loved the BK food, but Jaws was always represented as the one ready to eat all the time. Considering that those lil cheeseburgers were soo good, I couldn't help but agree with him. This version of Jaws was a part of the same series of toys like Boomer. There was some great poseability with the figures and in terms of Kids Meal toys, these were pretty nice. 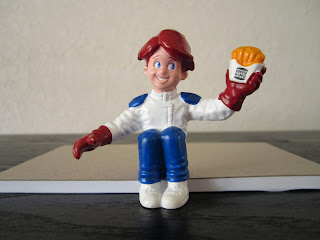 Wheels got around in a wheelchair. He was a paraplegic and I remember thinking that the BK Kids were such a great way for all kinds of different kids to be represented. I don't remember much about his personality. I feel like he was smart but also willing to do stunts and other cool tricks in his wheelchair. Basically he wasn't defined by not being able to walk. This toy of Wheels came out after the Kids had become popular. Each toy in this series featured a seated version of a BK Kid along with a type of vehicle that they could ride around in. If all were collected, the figures could swap and ride around in different vehicles. Of course Wheels looks like he is more interested in those fries than anything. If this toy had been made today, the fries would be apple sticks and the smile would be more like a frown. 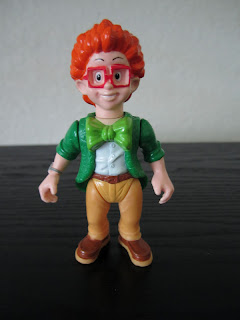 Next up was I.Q. Clearly this was the nerdy one in the group. I.Q. was super smart and just a touch bit witty. He was also given a heavily nerdified outfit. I mean really? Why does he look like a college professor? Everyone knows that a smart nerdy kid would be wearing a super hero shirt with jeans and ratty sneakers. The other BK Kids looked like they were dressed somewhat hip to what was the style at the time. Anyways, this I.Q. was from the same series as Boomer and Jaws. He also has the same level of articulation. 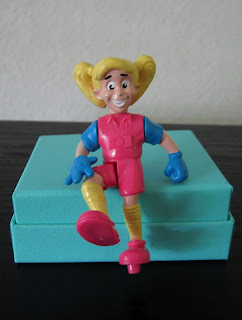 Up next is Snaps. She always had a camera with her and was the only other girl character, until Jazz was introduced at the turn of the century. I liked this character, but in terms of the Kids Meal toys, she was not usually featured much. This version of Snaps was one of the rare instances where she was even given an action figure form. This Snaps was a part of a sports themed set. Each Kid came with a tiny playset, and an action feature. Once placed on a small piece of plastic grass, Snaps could kick a ball with the press of a lever on her back. This was another really nice toy for a Kids Meal. Some of the articulation may have been lacking, however with such an interactive playset, it was still a cool toy. 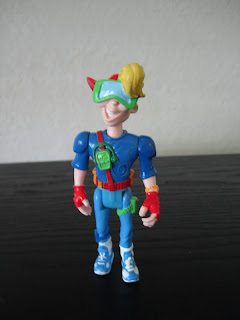 Finally we have Kid Vid, the "leader" of the BK Kids. He was always featured prominently in the ads and definitely had the most screen time. He was more addicted to video games and technology than he was of the BK food. I personally found him annoying because he was always throwing off this "Soo cool" vibe. Having never really been cool in my entire life, I certainly wasn't going to start thinking he was something special. I mean just look at those shades. He was not special. This version of Kid Vid was another detailed and articulated figure from the Burger King Kids Meal. 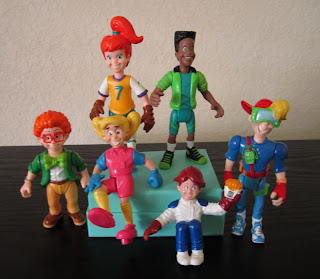 Here is the group, though there are a few missing. Lingo was added later on. His big thing was being an artist and speaking multiple languages. Each BK Kid had some sort of talent or hobby, as evidenced by their names (because I'm sure you haven't picked up on that already.) Finally there was Jazz. She was a lil tardy to the party (as mentioned earlier, she joined the group in the early 2000s) but her hobby was music.

The Burger King Kids Club was actually a successful marketing tool for Burger King. I don't know any specific numbers of how many Kids Meals were sold, but the Kids came out in '89 or '90 and lasted until about 2005. So something must have been working, because that is pretty impressive. Especially in this day and age, where some parents feel that toys in a Kids Meal are contributing to their children becoming wildly obese. I personally feel that Kids Meals are not the reason children are becoming obese, if anything children are obese because their parents order them a large Whopper or Big Mac value meal with a large soda.

I have lost track on the amount of times I have seen children takin' a bite out of a big burger and fries. Look, my brother and I grew up on Happy Meals. My parents cooked and provided a well balanced diet for us, but we couldn't help but enjoy the fast food goodness from a Kids Meal. We ate a lot of those Happy Kids Meals, however it wasn't until I started tossing back Double Quarter Pounders with Cheese that my ass got bigger. I mean come on. Leave the Kids Meal toys alone. Because if parents were smart, they'd hold on to those toys and sell them on ebay in the future. That is the perfect way to get fat... financially.

So that is about it for Toy Chest Tuesday! Enjoy these toys and be sure to keep it back here! There is no telling what is in store next.
Posted by Michael Lynn P. at 4:31 PM