We are all afraid of something right? I'm afraid of the aging process, not so much the number, but more like the number of slight sun spots and fine lines on my face. It is a strange thing to look in the mirror and see an evolving work of art. Will the art end up a master piece? Or will the art be something found in the 50% off bin at the local crafts store? I'm also afraid of running out of ideas. Every time a Toy Chest Tuesday comes up I worry that this might be the last one. Do I have what it takes to continually talk about my love for the toys of yesteryear? Eventually I will no longer have anything to talk about. It will just be me and my sunspots.

Anyways let's talk toys! Back in the day the Princess of Power toyline could be found everywhere. I remember finding POP toys for sale at the grocery store, corner drugstore, even the crafts store. Toy stores were not the only place to find She-Ra and her friends. Out of She-Ra's friends, Mermista was always my favorite, but I did have a fondness for Castaspella.

As a strange Dorkette I tend to buy characters and dolls that resemble me in some way. Castaspella was the closest She-Ra toy to sharing my physical characteristics. We both have reddish brown hair as well as a penchant for wearing bold teal eye shadow. There were many fond memories when I got Castaspella at the local drug store. She was just unlike any other She-Ra toy. Let's look! 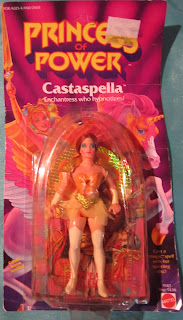 Castaspella is from the first series from the POP toyline, which featured a larger photo of She-Ra and Swift Wind on the card. Castaspella is also described as the, "Enchantress who hypnotizes." I always liked that decription becuase it made her sound mysterious and seductive. Of course she also had thigh high boots, so there really isn't much left to say about that, is there? 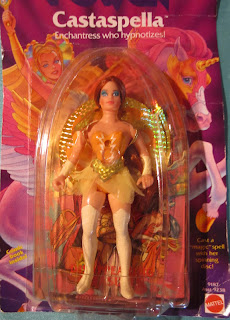 Aside from the thigh high boots, Casta came with a golden orange ensemble. Her outfit has always reminded me of fire and lightening, since those images were used on the decorating of her outfit and spinning disc. In the bottom right corner there is a mention of the disc, "Cast a 'magic' spell with her spinning disc!" The disc actually spun, which made this toy even more interesting. When I was little I found myself curious as to why this character had a large spinning disc attached to her back. It just seemed so cool and different. A comic was also included, entitled "Disappearing Treasure." 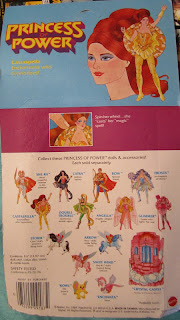 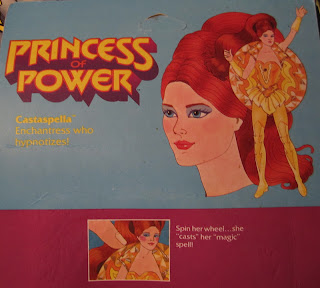 The back of the card was very unique. At the top there was an enlarged drawing of Casta's face and one of her posing. This dazzling display of She-Ra and her friends was only done with the first series. The second series of POP toys would feature one drawing of the character, although there would be a longer bio. Series 1 focused more on a picture, as Castaspella's bio is relegated to her one line description. There was also a smaller picture depicting how her action feature worked, which also differs from the second series. The second series had actual pictures of the She-Ra toys with their action features. 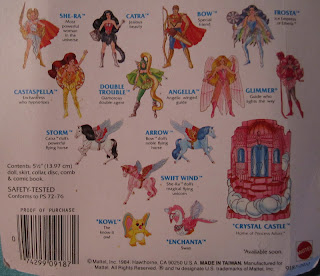 My favorite part of the back of this card was all the choices of She-Ra toys to collect. There were so many possibilities and imaginative ways to play. Each character had a brief line next to them, but that was really it. Unless you watched the cartoon, these characters all seemed so mysterious. More so with Double Trouble, who never made it into the She-Ra cartoon. Also the toy versions did differ from their cartoon counterparts. Let's see who was up for grabs in series 1:

Castaspella may have had a silly sounding name, and a toy costume color combo that has greatly divided fans of the cartoon and toyline, but she was quite a fun addition to the annals of '80s toys, wasn't she? So that is about it, I hope this was a hypnotizing Toy Chest Tuesday! If there are any fond memories of Castaspella, feel free to post any comments!