Hello dear readers! The secret word for today is, nostalgia! When you see this word you must scream real loud. It doesn't matter where you are, you must scream at the top of your lungs. It is not my problem if people look at you strange. Anyways in case you are slightly confused, the day is Thursday April 19th, 2012. (As of posting.) Normally I feature the fantastic Toy Chest feature on Tuesday. However due to a busy schedule and a death defying attempt to find Pee-Wee Herman, I had to relocate Toy Chest to Thursday.

Today we are looking at some vintage toys from the Pee-Wee's Playhouse television show. Airing on Saturday mornings, Pee-Wee's Playhouse brought us Pee-Wee and all his friends chillin' in a cool house in the magical Puppetland. Now I won't be discussing the drama over what happened with Pee-Wee after the show went away, because this Toy Chest is meant to celebrate the cool toys that came out with the show. And there were some cool toys!

Pee-Wee's Playhouse was one of the few shows that my parents liked watching with me. They were never interested in My Little Pony, completely bored with She-Ra, but for some reason they got a kick out of Pee-Wee. Who didn't? After the release of Pee-Wee's Big Adventure the world was obsessed with the funny man in a gray suit. It only made sense that a television show would follow.

The show ended up catering to children and adults, though I didn't know many adults who were originally collecting the toyline. I loved the toyline (by Matchbox) from Pee-Wee's Playhouse. I had so many of the items, including the Playhouse playset. It has since rotted in the atrocious heat from the Attic. But I have managed to hold on to some fun relics. Let's look at these memorable toys from the past! (I'm not sayin that special word yet.) 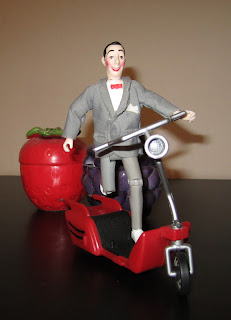 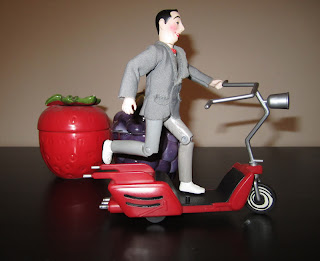 There was Pee-Wee and his scooter. I loved how he came with a cloth jacket. These little twists were what made the Matchbox toyline so unique. There was no cookie cutter uniformity with the toys. The Pee-Wee figure himself had a lot of articulation in the arms and a real likeness of the character. Not bad for a toy from 1987. 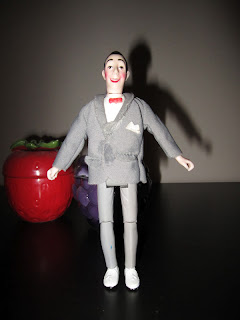 Pee-Wee wasn't the only star of the show. There was an eclectic cast of characters that were made up of puppets, objects, and some humans. Most of the characters ended up in toy form, and here are a few... 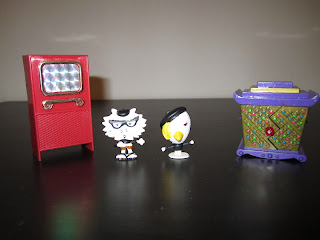 There was a television set that came with the Playhouse playset, and of course the musically talented Puppetland Band! There were three Beatnik members of the band but there are only two remaining members. (Rumor has it that the third member, Dirty Dog, wanted too much money to appear on Toy Chest.) The two members I have are Cool Cat and Chicky Baby. They were so much fun and were always playing in the alley of the Playhouse. I tried to throw out some rhymes in honor of them, but I'm just not that cool. To the far right is a mysterious box. I wonder what's inside? 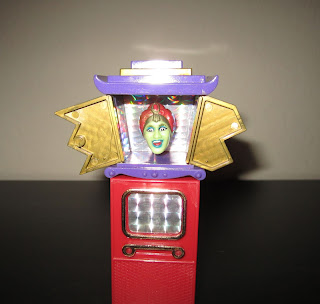 Jambi of course! Jambi was the floating genie head that lived in a glittery jeweled box that was just the greatest thing. Jambi was always granting Pee-Wee a wish and uttering the magical phrase "Mecca lecca hi, mecca hiney ho." I loved this toy as a kid, it truly was magical. Jambi's head appears to actually be floating in the box. No matter what angle a person looks inside the box, it is impossible to see the back of the head glue to the box. It looks like the head is really floating. There was also a pretty holographic sticker inside as well as spackled glitter on the box. I love it when toys have glitter in plastic or in the paint.

Speaking of glitter, no Toy Chest would be complete without Miss Yvonne. Oh how I loved Miss Yvonne. Let's look! 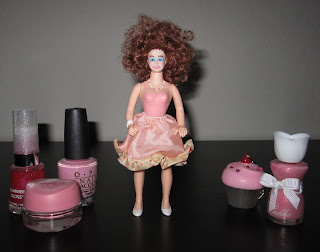 Miss Yvonne loved make up and being beautiful, a message I have tried to live by my whole life. Hey, hot-messness can be beautiful, ok? This toy was one of my favorites. I always loved her huge bouffant hairstyle and polka dot skirt. Polka dots are always a good time. As for big hairstyles, well, I've never been blessed with hair volume. As my mom told me when I was little, "Honeychild, your hair is too flat to ever be that high." Oh well, a dorkette has got to dream. Anyways the Miss Yvonne you are looking at is actually a remake of the original. (My original Miss Yvonne is withering away in the Attic.) 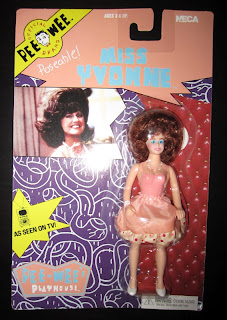 Around 2006, Neca released the first series of original Pee-Wee toys. They were placed on the same card and had that feel of nostalgia. (Start screaming!!!) Now this new Miss Yvonne was slightly different from the original. The original had shoes that were more pointy and more pink netting beneath the skirt. The original toy also had more rooted hair. 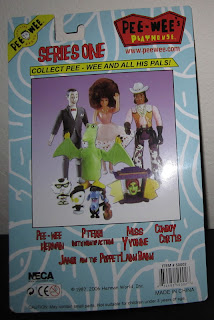 The back of the card also features the rest of the offerings from Series One. I never had the other characters, though Cowboy Curtis was always fun. This picture also further shows how different and fun the toy line was. There were wind up toys (Pterri.) Some of the figures had more articulation  while some had rooted hair. It was truly a hodge podge mix of toys. So now that I have shown you all some fun nostalgia, enjoy the pictures. And come up with some creative reasons behind all the random screaming! Until next time!