Remember when a new Disney animated film would hit theaters, and Mattel would never fail us by having a really nice toyline to accompany the release? I loved the figures that Mattel made from such greats like Alladin, The Lion King, Pocahontas, and today's Toy Chest, The Hunchback of Notre Dame! It has been ages since I last saw that glorious film about Quasimodo. How cute was he? Anyways Mattel did not disappoint with a nice little line to celebrate the Disney film, and of course, I just had to have a figure of Esmeralda. 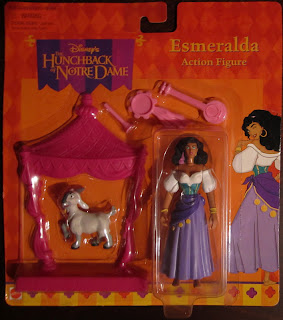 Esmeralda was the kind gypsy that befriended Quasimodo and taught him that the gypsy people were really good. Word had been on the street that they were kinda lawless, tacky and trashy. Ya know, the whole "Gypsies, Tramps, and Thieves" mindset that was so popular in 1482 Paris. I loved her because my mom had filled my brother and I with these tall tales that we were descendents from a line of gypsies. She firmly believes that notion to this very day, though I think she likes saying that we came from gypsies for the street cred; as well as her affinity for piling on as much stuff as she can. I keep telling her, "Mom, just because our ancestors came from Bohemia does not make us gypsy."

Anyways this Esmeralda came out in 1996 and was a nice adaptation of the movie character. She came with a set of pink musical instruments, a goat, and a tent. Everything was all in pinks and for a brief moment I was obsessed with wrapping scarves around my hair. I wanted to look the part like my life depended on it. The packaging also featured such pretty bright colors. It was very difficult not to want this item. Plus Demi Moore had been the voice of Esmeralda, which made the figure even better. I have been a huge Demi fan ever since Ghost. (To say nothing of Charlie's Angels: Full Throttle.) In fact, when I turn 40-something I will walk out of the ocean in a two piece like I own the joint. Believe that.

Here is a closer look at the figure: 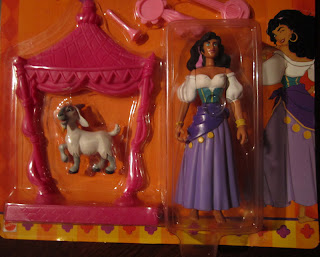 Mattel really did a great job capturing the details of the characters much like all of their Disney movie figure lines. I wish Mattel had made toylines to all the Disney movies released around that time. I am so tired of there always being some doll line based on a Disney movie. What about action figures from The Little Mermaid or Beauty and the Beast? I would die for an Ursula action figure. Could you just imagine? Flipping the toy over we see that the bright color scheme is still going strong with a basic line up of the characters for purchase. Underneath in bright purple is a sentence beckoning greedy children everywhere to "Collect them all!" I only had Esmeralda and Quasi. They were my favorites. Though the Gargoyles were fun too. 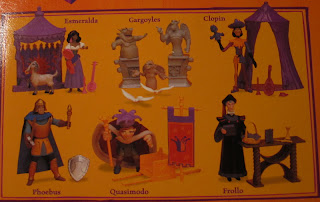 Upon closer inspection we see that these figures all came with pretty interesting items. Frollo came with a table. Clopin came with another tent set and his puppets. The three Gargoyles came with some birds. Speaking of that, has anyone seen the new line of Monster High dolls? They have one called Rochelle Goyle, daughter of a Gargoyle. Her plastic is made to look like stone! How fun is that? I nearly picked her up at my local Wal-Mart but decided to do the right thing and not add to my addictions. I'm regretting that decision. Hopefully there will be more though. Anyways the other choices were Quasimodo and Phoebus. I'm all for a good knight in shining armor, but something always irked me about that guy.

Also the photo of Esmeralda on the card back is very interesting. Her tent piece is shown having some extra design, like a partition. This did not come with the actual toy. It is very common for images of toys on the package to differ from what the consumer actually gets, however that piece would have been a fun addition!

There were other items from this Disney film as well. Some of the figures were paired up in larger sets with more pieces. There was also a really nice doll line too. Burger King even got into the spirit of things and released a line of toys to go with the film as well. The Hunchback of Notre Dame was actually a pretty popular animated movie at the time. Hopefully Disney will continue to make fantastic hand drawn animated films in the future. I'd hate to see that type of media end.

So here we are, at the end of another Toy Chest Tuesday! I hope it was fun and exciting. Be sure to check back though, I will be unveiling a new feature called Toy Regrets soon. Nothing makes a better read than a sad dorkette whining about the crap she missed out on. Seriously though, it should be pretty good. Until next time!
Posted by Michael Lynn P. at 5:22 PM