There aren't many things that I regret in this life. I have no regrets over my grunge goddess phase as a teen. Regrets have no place in my romantic past with all the questionable men I have dated. Even the most obscene fashion and hair choices have only helped me become the fabulous woman I am today, so really, I don't regret much.

Except when it deals with the addictive hobby of collecting toys and dolls. Oh there are plenty of regrets and misses that haunt me to this very day. It is shocking how many terrible choices I have made in regards to the toy aisle. I am typically spot on with my collecting adventures. I see a rare gem and I either hide it on another aisle (it is free layaway) or I quickly pick it up and rush to the cash register before some other dorky person can clobber me over the head for it. (We live in dangerous times.)

So the story I am about to share with you all is absolutely true. This is not like a roach story where I embellish my silly life experiences. Oh no. I like to call this cautionary tale, The True Time Travel Value.

Once upon a time, around 1994, my quirky family and I were making our way to a small Texas town to visit family. My family is like a traveling reality show that no one watches. My dad looks like a mafia kingpin, but is as loveable as Teddy Rupskin, while my mom is loud and ready to cut anyone's eyes out that messes with her children. I also have a younger brother who is a creative genius. But in '94, I was a gloriously surly mess while my brother still shared a passion with me for collecting toys.

We enjoyed traveling from the big city to the countryside to visit my mom's extended family. There were all these delicious country kitchens where the pastries and baked goods added pounds to your butt with just one look. It was heaven.

Anyway, we eventually got to the town and no trip was ever complete without a stop to the town square. Basic shops for basic needs lined the storefront windows, and it was all so cute. Real life for the town folk, but an innocent time for the clueless city dwellers. My mom had made a beeline for the floral shop while my dad was heading to the True Value hardware store. Neither place appealed to my brother and I, but we figured the True Value store would at least sell candy. The floral shop would only end up irritating our allergies and boredom.

My dad got lost in the True Value while my brother and I walked around looking for the candy aisle. We saw some candy, but stumbled upon something even better... a toy aisle! We both were shocked to see a toy aisle in a hardware store, but much like Hansel and Gretel, we kept on walking to the delicious destination, throwing caution to the wind.

It was a simple toy aisle, the shelves on the left side had girl toys while the right side had stuff for the boys. However, what we stumbled upon defied all our senses. All the toys before us were from the '80s. We had somehow been transported back in time. I was completely stunned. My brother ran down the aisle first, amazed to be finding these old artifacts.

For him this was a new experience. He was getting to see all the great toys in their packages that had been out before he was born. I was motionless, completely in shock. My eyes first rested upon some Strawberry Shortcake dolls. I also noticed some My Little Pony and stampers from the Cabbage Patch Kids. There were also Robotech figures and some Transformers. I didn't know what to do or how to react.

I was standing among the heavy weight toys from my past. Toys that I still cherished and had never let go of. I had walked up to the Strawberry Shortcake dolls and touched the boxes to make sure they were real. They were very real. Slightly dusty, but real nonetheless. I could not believe what we had found. This was big. This was like finding old dinosaur bones still intact under a park bench. Or finding a Van Gogh in a garage sale.

The experience would only get bigger. While still in a daze, my brother found a way to break me out of my reverie and called out wildly, "M! M! They have She-Ra." I lost it right there. At first I wasn't completely sure I had heard him correctly. But I looked in the direction of his pointed finger and I could not stop shaking. At the top of the shelf rested a mint in box Crystal Falls and a mint in box Sea Harp. My heart felt funny and I felt so dizzy. There were no She-Ra dolls, just the playsets.

There were Masters of the Universe figures though. I remember being shocked to see 2 mint Moss Man figures and a Spikor looking back at me. There may have been some SilverHawks too, but after seeing She-Ra and He-Man products for sale I couldn't recall much. My brother and I looked at each other with full grins. Forget candy. We were in the midst of a second Christmas.

Plans were instantly put into motion with how we were going to con our parents into buying every toy. This was a once in a lifetime moment to purchase these old toys. (We had no clue that Ebay would one day be invented.)

Sadly my parents thought we were insane. There was no possible way they were going to buy up every toy in the store. "But they don't make this stuff anymore! Don't you understand what this means?" My brother and I cried out. Showing little understanding my dad replied, "Haven't we aleady bought this stuff before? Why do we need to buy it again?" I looked at my brother as if to say, "I got this" and pleaded my case, "That is the point! I don't have these exact toys though, but now I can! You can't find this stuff in Toysrus anymore, ok?"

My pleas were met with laughter, "We can't buy all this stuff. We aren't made of money." My next point came fast and furious, "But you could buy most of it and just save it for next Christmas!" Nothing worked. We eventually came to an agreement though, we could each pick out two of the smaller items, but he was not purchasing the bigger items. To add insult to injury, both my mom and dad were ready to get going. What!? We had just gotten there!

Folks, this was one of the toughest decisions I have ever had to make. Had I been older it would have been easy. I would have scooped everything up and charged the hell out of it leaving a trail of debt and destruction in my wake. Blazing on ahead is the American way, is it not? However this was all a Greek tragedy. The deficit was going to be ok that day, but my heart would not.

I looked at the Crystal Falls box and whispered, "I am so sorry. I'm gonna have to leave you behind." I went with a Strawberry Shortcake doll, Cherry Cuddler, because I had always wanted her. My next choice was Dana Sterling from Robotech. I had never owned any of the Robotech figures, but I had always been interested in the packaging and artwork. I figured I should try something new instead of picking something that I have already owned, like a My Little Pony or He-Man figure. It was a major toy regret.

Looking back I would have summoned up my inner Erica Kane and demanded that my parents think of the investment pieces before them and at least buy a few of the bigger items, like the Crystal Falls. Instead I settled for something new. I should've at least picked up the Moss Man! But no, I had to go and choose blasted Dana Sterling from Robotech. Homegirl can be found on ebay for next to nothing now, while a mint Crystal Falls requires a kidney donation.

Oh dear readers, this just makes me sick. I had two tickets to paradise and I wasted them. Well, Cherry Cuddler has never been a waste, but you all know what I mean. Eventually my Dana Sterling would suffer a broken thumb and loose crotch joints.

And what of the magical time traveling toy aisle? It would be many years later until my family returned to the small True Value in the Texas countryside. They had returned on a trip without me. My brother had delivered the sad news that almost all of the old toys were gone. However about six years ago (in 2006) my brother had gone back to the True Value and surprised me with a lovely Christmas present. 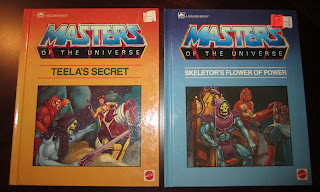 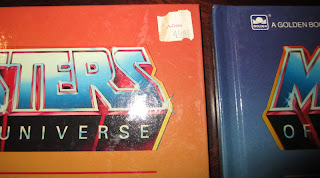 These two Masters of the Universe Golden Books had somehow managed to stick around in the store for a very long time. My brother bought these books in that True Value in 2006. That boggles my mind. They had been sitting in a store for 20 years, waiting for the perfect owner.

A year after that my mom, aunt, brother, and I had gone back. It had been so long since I had been there. So many of the family members that lived in the small Texas town had passed away, there had never been any reason to really visit. However we wanted to visit the cemetary and walk around the town square. We walked into the True Value and everything had changed. The toy aisle was up to date with current toys. I had wanted to inquire about the vintage artifacts my brother and I had once fell upon, but I did not. The last thing anyone needed was a sad dorkette trying to find the fountain of toys. However I will never be able to forget what my brother and I came across in '94. We had found treasure.

Alright dear readers, that is about it for my new feature! Keep it here because there will be more Toy Regrets in the future! Until next time...