Cooking is hard for the Countdown to Halloween 2013!

So this year I am doing something a bit different for the month of October. I went ahead and joined the other Cryptkeepers bent on counting down to one of the most awesome holidays of the year: Halloween! Head over to Countdown to Halloween and learn more. It's a fun way for the blogging community to get psyched for all the joys of the most spooktacular holiday ever. Click below and read on as I tell a scary tale involving me and the Kitchen of Doom!


I'm not one for cooking. Call it my "I am woman hear me roar" attitude, but I just never really got that gene to cook and be Suzy Homemaker. I don't know the difference between butter or margarine, but I can certainly rattle off the different She-Ra and Catra variants made by Mattel. That counts for something, right?

Anyways, the big deal this Halloween season for me is the Monster Cereals. Every year the usual three (Count Chocula, Frankenberry, and Boo Berry) make their return to shelves and it is nice. This year though, General Mills went further into the coffin and pulled out Fruit Brute and Fruity Yummy Mummy. These cereals are good and have not been on shelves in decades. Incidentally Fruit Brute is my favorite, that cereal needs to be around all year. Fake cherry flavored cereal is the best.

On a side note, how do you all eat your cereal? I hate milk. I just think milk is gross. I don't know what happened to me, maybe I've hit my head too many times, I just don't know. Either way, milk is too grody for all that is good and sane. I eat my cereal dry. Sadly, some of these Monster Cereals taste like funk when dry. (Fruit Brute though is still amazing.)

With all these Monster Cereals I've been scooping up, I've realized that I have a ton of cereal to eat. As such, I've been getting creative with how to eat all this cereal and in honor of so many family birthdays this past weekend and with Halloween coming up, I made Frankenberry Marshmallow Treats! And it was a nightmare.

Now I adore Frankenberry as a character. He is all pink and just the kind of character that I could hang out with. However, that is a lot of strawberry taste for cereal. 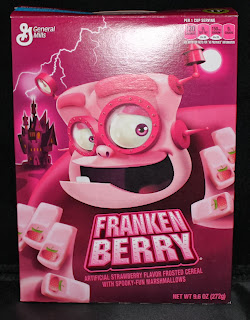 So I decided to go ahead and make Frankenberry Marshmallow Treats even though I've never made Marshmallow Treats in my life. I've always just assumed that if I wanted a marshmallow treat I'd just show up at someone's party and eat some. Not a big deal.

Can I just say, melting marshmallows is the most disgusting thing in the world. I used a recipe online and as I was making this terrible concoction the marshmallows just turned into something from the set of a horror movie. It was just a nightmare. Everything was sticky. For a second I firmly believed that the bowl of Frankenberry Treat was going to come alive and attack me. (You must butter the spatula before spreading the treat residue into a pan, I sadly had not followed that advice.)

At some point I gave up trying to scoop it all into the pan and just started pulling it out with my hands. (They were clean, I promise.) After pressing the hard sticky cereal into the pan, I messed my finger up and popped a blood vessel. I know, I know, it sounds terrible that I gave myself a bruise making Frankenberry Marshmallow Treats.

Anyways, once all the struggles were complete, this is what the damn mess looked like: 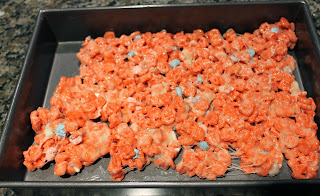 Don't adjust your screens, that does look like cat sick in a 13x9 inch pan. I was devastated. I know I can't cook, but there are times where I wish I was good at whipping something up in the kitchen. Knowing how to cook food is kind of important for survival reasons while knowing about She-Ra and Catra variants won't get you far in a zombie apocalypse.

So how did it all turn out? Was my failed attempt at making yummy Frankenberry Marshmallow Treats a success or a big dud? After offering bits and pieces to my loved ones, I am proud to say that they actually turned out pretty well! Sure I got a bruised finger and the treats looked like cat sick, but in the end they tasted like a strawberry wonderland of sugary cereal.

On that note, Halloween season is here! Stick around, this month is going to be a fun celebration of all things ghoul and spooky. I'll be posting my usual stories but there will be a lot of fun Halloween talk too. And, keep your ears to the walls, because I have a few fun surprises coming up very soon! Hope you are all doing well, and again, if you want to learn more about the Countdown to Halloween, click here and check out the other people participating.

Email ThisBlogThis!Share to TwitterShare to FacebookShare to Pinterest
Labels: Countdown to Halloween 2013!