All right readers, we're still counting down towards Halloween and I thought it'd be nice to check out some books from the Library of Dorkette Studies. Click below to see what haunting tales we'll be perusing this week.


I love horror movies and I love books, together what could possibly be better? Such was the case in the mid 90's. Two different publishing companies sought to thrill and terrify teen readers with young adult series based off of Halloween and A Nightmare on Elm Street. Let's look! 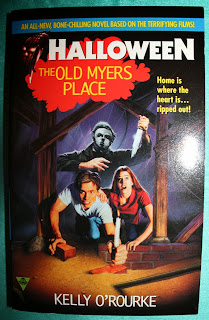 Released by Boulevard Books in 1997, The Old Myers Place was the second book in the Halloween series and sadly it was the only one I was able to pick up when the series was new. The book still smells like B. Dalton Books though. Goddess I miss bookstores in the mall. The cover art has a thrilling feel to it. Mary and Jeff are just crawling around with a measly candle for light, while a deadly Michael Myers lurks behind them! I loved this series because I was very interested to see how a Halloween entry would translate in book form. 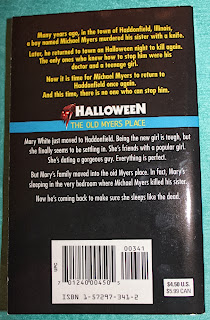 The back of the book had two distinct parts, the main description of the overall series and a description of what the scoop was for the current book. The book totally read like a long lost Halloween movie that never made it to screen. Literally, this story was completely like any regular old slasher flick. Mary White is living in the house that Michael Myers grew up in, and as she is getting used to her new life in Haddonfield, poor Mary doesn't know that she is the next to be on his list! (Actually, wasn't this similar to one of the Halloween movies?) The ending is of course like most Halloween movies, Michael Myers is left for dead, but he takes a lickin and keeps on tickin.
Freddy Krueger's Tales of Terror: Virtual Terror by David Bergantino 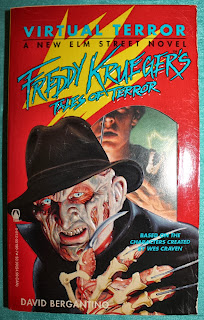 Tor Fiction was onto something in 1995. Teens everywhere were interested in a series of novels based off of A Nightmare on Elm Street. I feel like this series lasted a little longer than the Halloween series, because there were five books in the series that I know of. I remember when I first saw this book, I totally flipped out. It was a part of a freakin Freddy Krueger series of books! 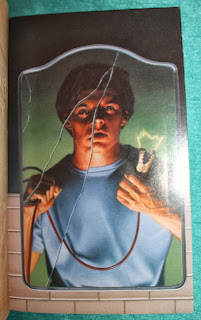 The cover art on the inside is very mysterious. It reminds me of the second Nightmare on Elm Street, because this book features a male main character. The cover art for these books were always interesting. There were so many that I liked, but much like all the really cool things in this world, the series was gone before the blink of an eye. 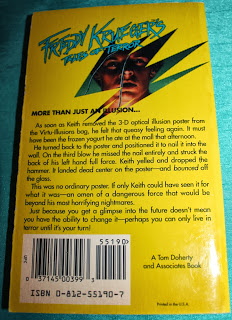