Here comes Halloween! Are you ready?

The topic this week from the League of Extraordinary Bloggers is:

So if you are interested, click the link and read about what gets me in the mood... for Halloween!


Halloween has always been a big deal with my family. Actually pretty much every holiday has been a big deal to my family. There are some holidays that rate differently among each of us though. For example my dad treats April Fool's Day like the holy grail of holidays. He does his best to prank everyone. My mom and aunt go on overload for Thanksgiving. By Christmas we're all ready to pass out. Halloween though has always been the one holiday where we all just really enjoy the changing of the seasons, eat a ton of candy, watch horror movies, and (sometimes) find fun costumes to wear. Nothing gets me ready for the spooky spirit of the season quite like thinking about the necessary ingredients for the perfect Halloween!

I love the whole idea behind haunted houses, but I have never once stepped foot in one. Ever. I get that it is the job of the haunted house people to scare customers, but I just have never wanted to actually enter into a house and be terrified by real people. I remember the church we went to growing up had a Halloween fair every year, and they converted a covered basketball court into a haunted house. So I got in line with my dad and brother and was all set to walk through this Haunted House. As we got closer, I totally chickened out. I couldn't take it. I was way too scared. Who can't take the church Haunted House? I mean, what could have been so frightening? Looking back I feel so lame! Who does that?

Part of Halloween is getting your scare on! Which is exactly what happened one year when I was in high school. I loved having friends over and renting horror movies from the mom and pop video store down the street and just having fun. This one year though, my friends wanted to go trick or treating. Emphasis on the trickery part. I hung around a mix of people in high school. We were all a blend of styles and looks. It was all freaky chic cool. So I had this goth girl friend and she really wanted to frighten some boys and ghouls, so she literally crawled into the bushes in my parent's front yard and would jump out at all the people walking up the sidewalk. Soon the whole neighborhood was stopping by Miss M's house to get frightened. It was just so much fun and always reminds me that getting scared can be fun, but it's more fun to be the one doing the scares. I just need to maybe get over my fears though. So maybe, just maybe, I'll go to my first Haunted House. Next year.

My parents would probably like to think that they aren't dorky, but they are totally dorky for movies and pop culture. Where else would I have gotten it from? I grew up in a movie household. If we weren't at the movie theaters, we were busy renting or watching movies on television. I don't quite know how to explain this. I grew up in a household where I could sort watch whatever I wanted, within reason. What does that mean? It means I got to watch horror movies when I probably should not have been allowed to do so. Horror movies though were a staple of our Halloween season (if not the rest of the year.)

The mom and pop video store I just mentioned was called Midway Video and that was where we went for our movie fix. I was always transfixed in this store, because they had everything. New releases and all kinds of other movies from various genres. It was like the library, I'd just get lost perusing all the VHS tapes with their interesting box art images. I couldn't help but wonder what kind of stories were inside each tape. The horror movie section was always the best, because they always had the most interesting box art. I'd just pick a horror movie each weekend. It truly was the best. In fact I need to maybe see if the Cult Film Club can help me, there are a few movies I remember watching as a kid, but I can't remember the names. I just remember story lines and scary moments.

Horror movies are such an integral part of Halloween! I love nothing more than watching some horror movies to get me in the spirit of things. I just wish there were still some mom and pop video stores in the area. Nothing was better than having the video clerk recommend all kinds of movies I would have never normally been exposed to.

I want candy! Halloween candy! Getting scared to death is only half the fun of Halloween, the other half goes to the diabetic sugar rush one gets from the massive amounts of candy to consume. The best thing about candy around Halloween time for me was when my brother got old enough to enjoy the holiday. We worked together to maximize our caloric intake. He had his favorites and I had mine. Together we'd just marvel at all the wrapped sugar in front of us. My particular favorite candy brands have always been Sweetarts, Nerds, Starbursts, and Payday bars. Yes, Payday. That sweet caramel with salty peanuts has always been one of my favorites. There are just two problems with this. 1) According to my parents, Payday candy bars were always an older person candy bar and therefore I was channeling my inner old person with every bite. 2) I'm allergic to peanuts. So not only do I enjoy a senior citizen treat, but I also break into hives. Scary, I know. Every bite is worth it though.

Growing up we didn't have a lot of extra money to spend on fancy costumes, so our costumes were usually styled by my mom and handmade by my Nana or a family friend. They were the kind of costumes that required some squinting and slight guessing at what the costume was, but my brother and I always loved the costumes that we had.

Every Halloween there was always a Halloween party at my parent's house or a cousin's house or something. One year I was about four or five and we were having a family and friend Halloween party at my parent's place. We had everything all set up and I was just so excited! My friends were going to be arriving and I was ready to show off my costume. I was Minnie Mouse that year. The costume was a hand made mouse suit with a bow on top and a small dress over the suit. There was even a tail safety pinned on the back, and sitting was so annoying. I'm so glad that tails were phased out from human evolution. Could you just imagine how annoying it would be to have a tail to deal with? I don't know how cat people do it. (Although I guess I do have to admit, having a tail would be sort of cool.)

Anyways, I had a friend that arrived to the party and she was that kind of friend that you just knew was going to grow up and be a popular girl. We were in Kindergarten and it was just so evident then. She had white blond hair that even Emma Frost would be envious of. Her eyes were clear blue and she had this year round tan look, like she vacationed in St. Tropez every weekend or something. And while I was in my makeshift Minnie Mouse costume, she showed up in a glitzy sequined ballerina/princess costume. In most stories, this would have devolved into a silly riff off of Dynasty. You know, I'd be the girl with low self esteem itching for a fight while the sparkly blond would be rattling off a list of bothersome diva traits.

Only it wasn't that way though. We both sat together and just talked about our costumes and how cool they were while drinking fruit punch and eating cheese dip. This is such a nice memory for me because my friend did indeed grow up to be one of the popular girls and though we headed into different social circles, we were always nice to each other. Not to sound like a Care Bear after school special or anything, but it was nice that we both had friendly attitudes. There was no, "My costume is the best, yours is the worst!" Nothing like that at all. Instead we were just two kids enjoying Halloween.

I think out of all the aspects of Halloween, the costumes have always been an important part about my role in getting ready for the holiday. There is just something magical about the power of a costume. One Halloween I was still hanging onto my obsession with the doomed Supergirl movie. I just had to be Supergirl at all costs. The only thing was that there wasn't an abundance of Supergirl costumes in stores.

Anyways, my mom worked her magic and put together a homemade Supergirl costume consisting of a basic blue sweater and she added a 'S' on it with hand stitching. A red flouncy skirt was next with some red fabric fashioned for a cape. We couldn't find red boots, instead I put some red tights on with my pink high top Converse sneakers. My mousy flat brown hair and bangs topped it all off. I looked nothing like Supergirl at all, but you know what? I felt like Supergirl. I felt like I could fly and move mountains. I felt like nothing could get me down or stop me from being the coolest version of me possible. And that my dear readers is the power of a costume.

Trust this much though, I haven't always had the best fit with a costume. Why, just last year I was all set to go as Pizzazz to my friend's Halloween/birthday party, and that whole look bombed horribly. I'm sure at some point this month I will share some more stories about costumes gone horribly awry. For now though, I leave you with a photo. Since my brother and I grew up with homemade costumes, he really took it to the next level when he got older. In high school he would always create the coolest costumes for Halloween (and other events too) like Ziggy Stardust, Beetle Juice, Drop Dead Fred, and this one: Edward Scissorhands. 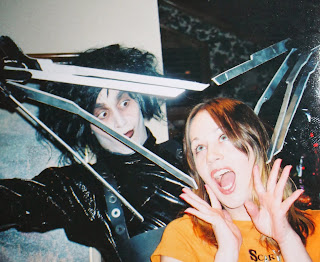 That's me, getting ready to get my hair did. I have never really been good at making things, but my brother on the other hand has totally carried on the torch of making homemade and awesome costumes. So that's it for me, let's see what others are up to with this week's topic!

-The Monster Cafe shares some favorite Halloween images.
-Nerd out with Patrick and the spooky entertainment that gets him in the Halloween spirit.
-The Goodwill Geek shares his Halloween icons.
-Daniel shares a visual feast for the history of Halloween!
-Kevin shares some spooky cool Halloween art.

I hope you are all doing well! And get ready! Tomorrow marks the exciting crossover event of toy Miss M heading over to do a guest review on ThEpic Review! What will the review be on you ask? I'm keeping mum for now...