The basic premise of Broken Hearts was that various girls at Shadyside High are receiving horrible valentines from someone. (I received a horrible valentine once too, it involved a skeezy guy inviting me and my girl friend over to his place to see his new hot tub.) Back to the story! So murders start occuring (of course) and the two main characters, Josie and Melissa aren't sure what to do when they start getting the terrifying valentines too. I was a pre-teen when I first read this book and all I could think was, "My goodness is this what love is like in highschool?!" I had soo much to learn.

Anyways here is the cover of Broken Hearts: 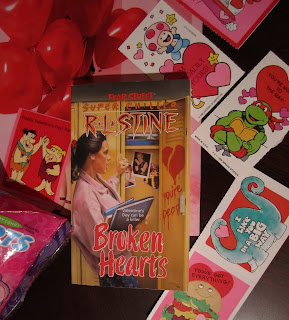 As you can see Josie is on the cover opening her locker to a surprise. Someone defiled her locker by drawing a heart and message that says, "You're dead." I am guessing the message was written in blood. Can I just say, I love her pink denim jacket. And though I would no longer be caught out in public with a scrunchie (thank you Carrie Bradshaw) I just love that Josie is sporting one. Ah scrunchies. There was actually a time in this world where it was acceptable to wear scrunchies. Oh goodness what were we all thinking? It doesn't matter, we'll eventually have fashion amnesia and go back to wearing them as if they were the greatest gift to hair.

There is also a caption that reads- Valentine's Day can be a killer. Yes. That captures my thoughts exactly. V-day is a killer: as in a large amount of dangerous caloric intake being used during the consumption of chocolate and other types of candy. I've almost gone through one bag of gummi Sweet Tart hearts. This is just the beginning folks. I'm ready for all the 50% off after V-Day candy sales to start so that I can get the stuff that won't be around for the rest of the year and hopefully everything will go back to normal.

Anyways here is the back of the book: 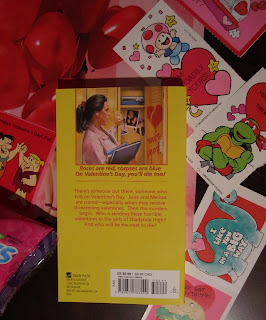 Doesn't the story description just sound good? This was a really great story. I believe this had been the second or third Fear Street book I had read and it was so good. The story had a major shock as one of the main characters was killed. This had been the first book I had read where one of the main characters was murdered. Half way through the book this character was murdered with an ice skate to the back. (Who would have guessed that Tonya Harding had moved to Fear Street?) I could go on and on about this great mystery, I have so many fun memories of reading it. As usual though, if you find yourself yearning for an old young adult thriller to read, check out Broken Hearts! Here are some free words of wisdom, if you think your V-Day sucks due to your partner completely forgetting about the day and getting you a used box of candy, just remember, you could have an ice skate to the back.

Anyways dear readers that is about it for today. Tomorrow will be a brand new Toy Chest Tuesday and it will be lovely, the perfect way to celebrate Valentine's Day!
Posted by Michael Lynn P. at 5:49 PM