Ok toy fans it is time to reveal a new hottie. Now before the big reveal is said, know this, I had a really hard time deciding who would be the Heroic Hottie for the month of February. I really wanted to show off someone new and fresh, however upon further inspection I realized that we are in the month of February... The month of love and heart shaped candy... There was only one figure that could really be the first Heroic Hottie for February. That hottie is Bow from the Masters of the Universe Classics line.

Bow is quite an interesting character. Growing up I received Bow as a gift for my birthday. Actually the gift consisted of a She-Ra and a Bow and I was in love. He was my boyfriend. Poor Superman had been tossed to the curb. To the left, to the left. I loved how Bow had the heart feature that would "beat" with just the press of a button on his back. He was just a magical toy to me. I also loved him in the cartoon. His affinity for music totally caused me to grow up fawning over dangerous rocker types in garage bands. I have learned many a lesson since then.

Long ago when everyone in the neighborhood was playing with She-Ra toys, my friends who were casual fans would have their She-Ra doll date their (or their brother's) He-Man figure. I always got a laugh out of that because clearly She-Ra and He-Man are twins. No amount of make believe play can change that ick factor.

So I always had my She-Ra and Bow going out on dates. Every now and then Glimmer or Flutterina would try to work their magic on Bow. It never worked. His heart always belonged to She-Ra. He was just a great action figure. Bow was a man of many talents, he could play music, was a great archer, and he was really kind. Of course there was that small minor detail that Adora/She-Ra actually had a thing for Sea Hawk, but my thought on that situation is this: if you find yourself with a dual identity it only makes sense that there'd be a man for each one. Right? (I'm more of a one identity kinda girl, I don't think I could deal with dating more than one man at once. Too much work.)

Of course time would pass, as it always does. Most people would eventually grow up and rid themselves of plastic toys while the hardcore dorkettes and dorks would still remain, carrying the torch for their fallen adult peers. Fans of He-Man and She-Ra would fall into different camps regarding all the various factions in the MOTU mythos. Inevitably some would start to mockingly question Bow's sexuality. This was mostly a backlash from fans who really disliked Princess of Power. From what I have read throughout the years some people who really disliked Bow have spouted out jokes that Bow was gay, a flaming sissy, or basically insert any awful derogatory comment that one can come up with. That impolite banter has always bothered me. For starters I don't think someone's sexuality should ever be put down and degraded. This even goes for an action figure's sexuality. Secondly Bow was never intended to be gay (at least not to my knowledge. And if he was, I was totally crushing up the wrong tree.)

Now here is the thing, I realize that Bow can be whatever a fan wants him to be. But are gay guys really clamoring for Bow to be gay? According to my gay friends, I can have him. They don't see the appeal and kinda think I have issues for having a slight crush on a cartoon and toy character. So regardless if you are straight or gay, let's check out Bow and see what all the fuss is about!


February 2012 Heroic Hottie
Bow
﻿﻿
"One of the best things about the clubs on Etheria is that there are dozens of women for every guy." Bow smiles revealing a row of white perfect teeth. When asked what he thought about being the February Heroic Hottie for 2012, Bow had this to say, "I try to be a hero. She-Ra mostly saves the day, but every now and then I come close." When asked for a follow up on this statement She-Ra had this to say, "Bow works very hard to help the Great Rebellion. If we didn't have his moving music and party punch, life would be rather dull. Don't print that." 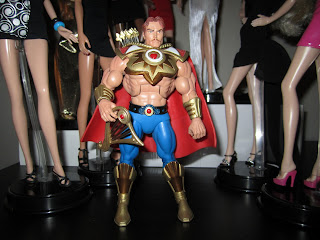 No stranger to upgrades, Bow recently went under a whole new body transformation about a year ago. He was ready, "I needed to update my look. When you are around gorgeous women in tiny skirts and thigh high boots, you have to look your best. I'm living in paradise. Well, aside from the whole Horde-occupying-the-world thing." 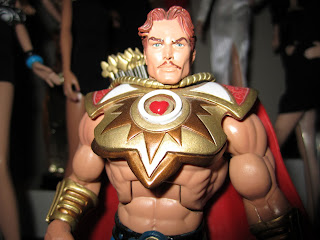 When asked to describe some of Bow's best features, Glimmer (friend to the blog) couldn't stop gushing, "Just look at that face! He is so handsome! I could get lost in those eyes... And don't even get me started on those biceps." 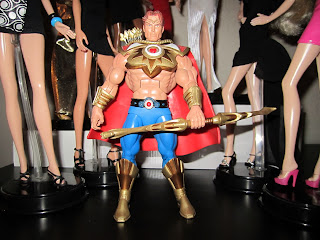 Many people from all over Etheria have come near and far to hear Bow play his harp, however it would surprise some to know that he is also an excellent archer. "Not to brag or anything, but I have destroyed my fair share of Horde Troopers. I know how to shoot an arrow with great skill. I never miss my mark." And when that mark happens to be a fair maiden's heart? "Oh I wish Bow would take aim at me, but he has eyes for someone else..." Glimmer says wistfully, wiping tears from her eyes. When asked for more information, Glimmer had to exit the interview. She could be heard sobbing uncontrollably in the ladies room. 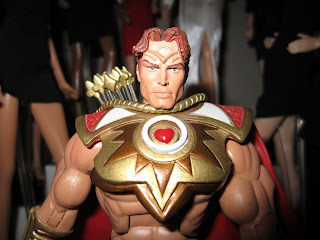 "I like to mix things up. Sometimes my moustache gets me into trouble, so I will shave it off. I like to think that it gives me some mystery." With a rugged face that drives most of Etheria crazy, what about the heart on his chestplate? "Oh my heart. Well it is a funny thing ya know? I've heard that it is wimpy to display a heart on your chest, however I am comfortable with my manhood to proudly display this heart. Besides it only beats for one really special someone..." 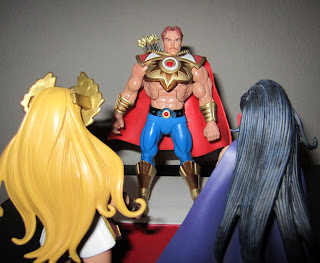 That "someone" would be the one and only She-Ra. Rumored to have been in a long term special friendship, many in Etheria await the day when She-Ra and Bow make something official. "It will never happen!" Purrs Catra. "That special friendship is code for booty call. She-Ra is more interested in something working with that roguish pirate Sea Hawk. It is never going to work between Bow and She-Ra. Silly Bow can never see what is waiting right in front of him." The jealousy and obsession that Catra has for Bow has many calling her cray-cray, but Catra doesn't feel that way. "Why should She-Ra get the love and affection of two gorgeous men! I just need Bow to realize that if he could choose me, I'd be sure to give him some serious cat scratch fever. Maybe I should kidnap him..." A truly bizarre love triangle indeed.
One thing is for sure though, people everywhere will have plenty to drool over for the month of February! "It is an honor to be the Heroic Hottie this month. I feel very distinguished!" Bow warmly states. There you have it folks, all the information you needed to know about Bow! Be sure to check back soon for more awesomeness!
Posted by Michael Lynn P. at 9:41 PM