Thank you for all the awesomeness you have shared with dorky folk since the dawn of the '80s. I don't think I have seen any of your work that has left a bad taste in my mouth. And while I am really looking forward to Dark Shadows in May, I think today I will look at some toys from one of your films that is just divine. Beetlejuice, how I love thee! Funky green mold and all!

All my dorky gratitude,
Miss M

Ok dear readers it is time for a whole new Toy Chest Tuesday! I remember seeing Beetlejuice in theaters and just falling in love with that movie. It was creepy, funny, and had Winona Ryder in it who I just love. My mom thought I would be scared by the movie and was worried about me seeing it in theaters, but I survived Large Marge from Pee-wee's Big Adventure. I was all good.

The movie was great as was the toyline. I was so thrilled that Kenner had released a line of toys to accompany the film. So let's take a look at some of the items from Kenner! 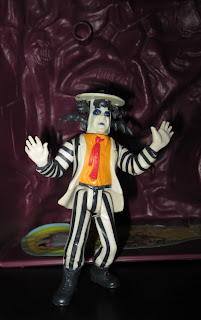 Here we have Showtime Beetlejuice. (If you look at his face he almost resembles Jason Sudeikis.) Sandi, president of the Fashion Club would probably have horrific things to say about Beetlejuice's striped suit, though it is his signature look. Kenner did a really good job of making different Beetlejuice figures that were based from the movie. Of course in true Kenner fashion this Beetlejuice came with some showtime special effects! 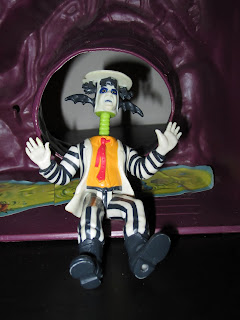 While lifting the lever up on his back, Beetlejuice's head sticks up with a snake like neck. (I had to have him sitting and leaning against something to keep the head up.) Of course wait, there's more! 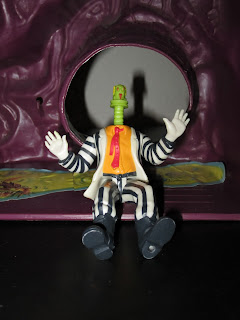 With a quick pop off of Beetlejuice's head we see that underneath is a snake Beetleface. Super creepy with that Kenner charm! 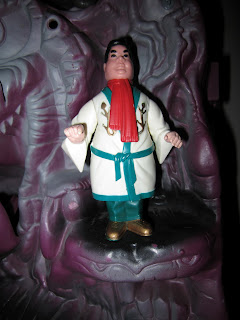 Here is Otho the Obnoxious. And wasn't he though? I was always perturbed by his character but just had to have his action figure! I mean he's Otho. Everyone wanted an Otho, in 1989 he practically caused the same kind of frenzy that the Cabbage Patch Kids had caused years earlier. Remember? Ok maybe not, but he did have a really great action feature! 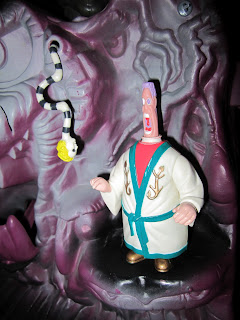 As soon as Otho is exposed to something scary his face instantly elongates and looks frightened. The little creepy critter to the left was the Rotton Rattler, a rattle snake with Beetleface. He came with the Showtime Beetlejuice shown above. Each regular sized Beetlejuice toy came with a smaller creature with a Beetleface on it. 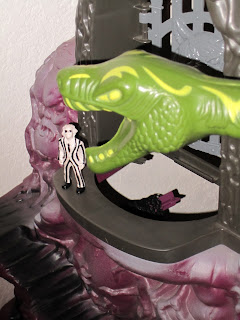 Here is a miniature Beetlejuice figure that I believe came with the Vanishing Vault playset. I am not 100% certain on this but if anyone knows please feel free to tell me! I'm a tough old broad so my brain and memory skills aren't what they used to be. 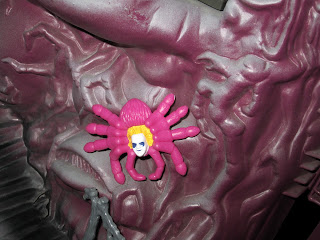 Here is the Terrible Tarantula and he came with the Head Hunter (not shown because I lost him to the Neitherworld, aka the attic.) The Head Hunter was cool because he had a green arrow through his head. He also had a removeable head showing a shrunken head underneath. So much fun. Plus any chance I have to own a hot pink spider always works for me. 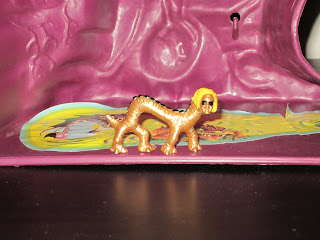 This golden beauty was called the Loathsome Lizard and came with Otho. I've never really seen a gold lizard, but I've also never seen a hot pink tarantula before either. So clearly I love this reptile very dearly. 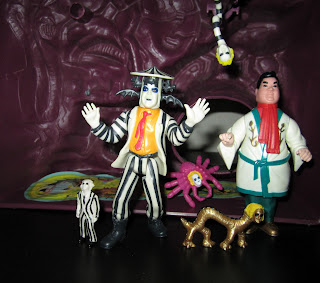 Here is the group. I really enjoyed the toylines that Kenner made. They were always inventive and were pretty faithful to their film or animated counterpart. Though I do have one gripe about the Kenner Beetlejuice line. I have never forgiven Kenner for not releasing any female Beetlejuice figures! I get that this toyline was made for boys, but girls liked Beetlejuice too. And the female characters from Beetlejuice all had important and iconic roles in the movie. They deserved the royal action figure treatment! My goodness I would have loved a Barbara Maitland, Delia, and a Lydia Deetz. Barbara could have come with an alternative stretch face head. Delia would have needed that funky hair look and a shrimp cocktail. Finally Lydia would've been sporting that red bride dress. I wanted to grow up and get married in a red lacy dress like that.
Anyways the closest thing I have ever seen to a decent female Beetlejuice figure was from Neca. In my book that is just not good enough. I want more female Beetlejuice toys darn it! Is that so much to ask? Look I am all for multiple Beetlejuice variants, he is the main star. I get it. But there is just no excuse for the lack of at least a Lydia figure. This whole mess just gets me so worked up, I am just verklempt! That's it, Toy Chest is over for today. I'm done.
Oh who am I kidding! There's more! Following the movie it only made sense that there would be an animated series. First out in 1989 the Beetlejuice animated series lasted until 1992 and followed Lydia and her friendship wtih Beetlejuice. Word on the street was that a toyline had been toyed around with, though the closest thing we ever got to a real toyline from the animated series was a line of kidsmeal toys from Burger King. 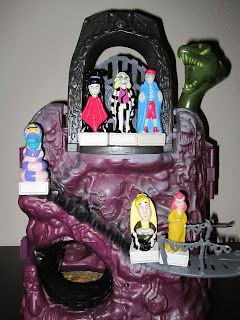 Here is the full set hanging out on Snake Mt. The fun thing about these toys was that behind each toy was a different version of Beetljuice with a saying at the bottom. Super ghoulish fun! 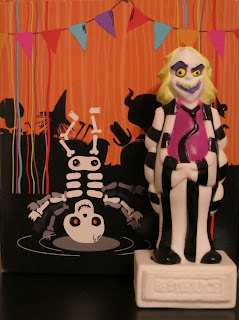 Here we have animated Beetlejuice. He looks like that teacher that just doesn't give a shit. Like he was out bar hoppin' and then decided to roll into work. 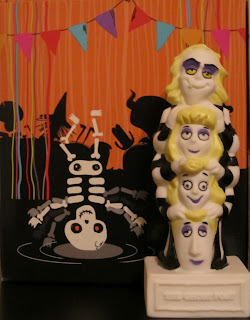 Here is the back of Beetlejuice. The bottom caption of the heads reads "The Ghost Post." The totem poll look featured the Deetz family and Beetlejuice himself. 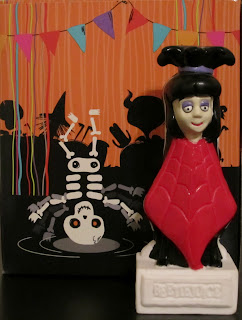 Well in a way I did end up getting a Lydia figure, though I never thought she'd be coming out of a Burger King bag. Oh well, beggers can't be bitchy can they? Though I must say this Lydia looks a tad tipsy. Still this was one of my all time favorite kidsmeal toys, ever. 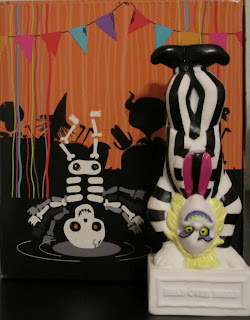 Turning Lydia around we see Beetlejuice doing a handstand. The caption says, "Head Over Heels." I love how his feet are part of Lydia's hair. It was a perfect blend! Just fantastic toymanship, way to go China! 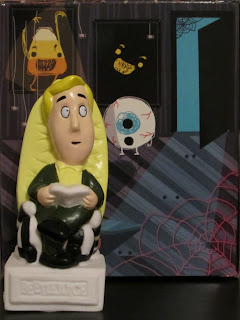 Charles Deetz was Lydia's father. He was always getting punk'd by Beetlejuice. I love that he is sitting in his chair looking over his shoulder. Almost like he knows something is about to go down. 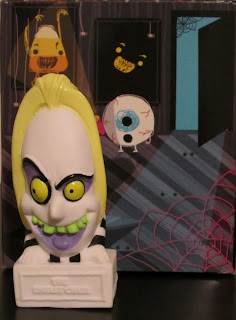 This was one of the more creepier looking back sides to the toys. Beetlejuice has a large face that looks odd. The caption says, "The Uneasy Chair." I'd be uneasy too if I had that face sitting under my chair. That's worse than snakes coming up your toilet. Or a baby alligator. 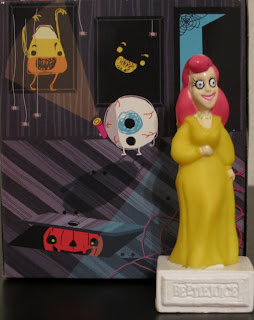 And here we have Delia, Lydia's stepmother. She may not have come with a lively shrimp cocktail, but she did come with a cool dopey look on her face. I loved her. Though I have never liked shrimp cocktail. I just can't get into eating shrimp. They look grody. 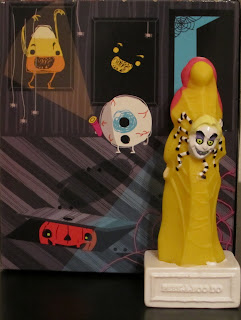 The back of the toy was entitled "Peek-A-Boo Do." Here we have another Beetlejuice spider walkin' in a spider web. On a side note has anyone ever had a spider in their hair? I thought I did once and it was awful. Ever since Scary Stories 3 I have been paranoid that a spider will hatch eggs in my cheek or something. Just leave them alone and they'll do the same. 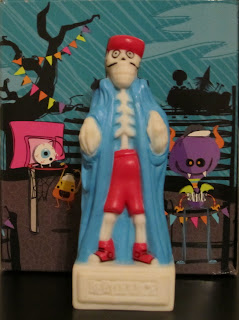 Up next is Jacques LaLean, a french bodybuilder who was also a skeleton. If I recall correctly he was always falling to pieces, kinda like a Patsy Cline song. He was very cute. 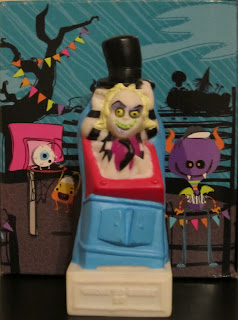 The back side was Beetlejuice busting out of a televison set. "Ghost to Ghost TV" was very similar to a Freddy Krueger scene. Can I just say though, as much as I love Beetlejuice the thing I found really gross about him was his teeth. I'd always try to imagine how foul and rotten his teeth must have smelled, but could never really fathom that much. There are some things that just need to be ignored. 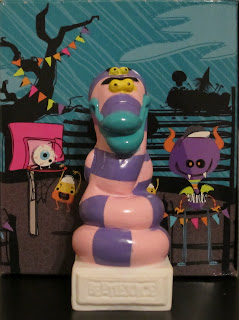 The next and final Burger King toy was the Sandworm, always a menacing annoyance. I can't say much about the Sandworm. I avoid deserts because of the Sandworm and for the longest time felt that walking through the kitchen backdoor would indeed take me to a whole new world. 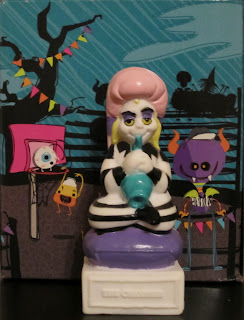 This was a very interesting flip side. "The Charmer" showed Beetlejuice sitting on a pillow and apparently charming a Sandworm. I thought his hat was actually his brain swelling out of his head when I was little.
And "The Charmer" actually sums this whole toyline up rather nicely. Beetlejuice charmed his way into my lil heart. I will always have high hopes that a lil toy-company-that-could will release some new Beetlejuice figures featuring the characters that deserve to be immortalized in plastic long after we have all received our own copies of The Handbook for the Recently Deceased.
So that is about it for today's supersized Toy Chest Tuesday. (It was rather lengthy wasn't it?) Check back soon for more fun stuff though!
Posted by Michael Lynn P. at 9:08 PM