That was one of my favorite parts about school. The possibilities for styling card mailboxes and all the kinds of cards available at the store was so exciting. I remember receiving an ALF and Rhonda valentine from this boy in my elementary class and I just loved it! I felt so special because I don't think he gave that particular valentine to any other girl in class. It was such an awesome feeling, one that would not really be repeated since I grew up into a real socially awkward mess.

Anyways let's talk about what's on tap for today's Toy Chest Tuesday. I have a nice group of toys today and it is in honor of the great folks at Planetoa.net. For those who are wondering PlanetOa.net is the place where the greatest toy minds in the world converge to discuss all manner of geeky news. If you are interested and would like to join, head over now! Everyone is nice and wonderful.

So, where were we? Ah yes, the toys! The Teenage Mutant Ninja Turtles were one of the best toy lines ever made. Rolled out by Playmates in 1988 these toys went beyond the original fab four turtles. Much like most of the large toylines from the '80s practically every character from the TMNT cartoon and films were made into an action figure. My first TMNT figure was April O'Neil (duh.)

The second TMNT figure I got was Michelangelo, the party turtle. There was such a strange feeling upon owning my first turtle. I mean let's be real up until TMNT I was all about barbie and other girly items. Sure there'd be an occasional He-Man or Lion-O added to the mix, but they were mainly wanted because Teela and Cheetara needed boyfriends. No, owning a mutated turtle was completely new. I had never quite owned anything like it. What was I supposed to do with it?

Needless to say I quickly fell in love with the turtles as did most people at the time. Each turtle had their own unique personality along with a wide range of ninja weapons. Oh, and a love for pizza. I was able to own a few TMNT figures, though not every single one. Playmates really made a vast long running series of figures. It is mind boggling at the amount of items that were available to fans.

So let's check out some of the Turtle toys I did own! 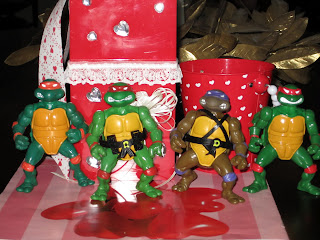 Here is the fab four. Err, make that three and a variant. (I couldn't find my Leonardo at posting time.) Anyways from left we have Michelangelo sans belt, Raphael, Donatello, and another Raphael, sans belt as well. Can I just say I hate missing pieces and accessories? Nothing drives me crazier than losing weapons and a missing Leo. 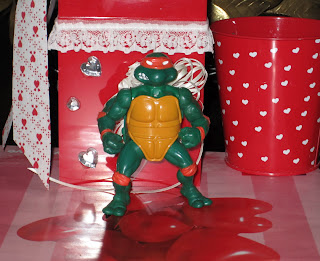 Here is a solo picture of the turtle everyone wants at their house party, Michelangelo. He looks a bit naked but that is ok. Somewhere Pizza Hut and Dominos are anticipating numerous orders for pizza. This was the first edition Michelangelo and there were many editions to follow (maybe if you are all good his variants will pop up on Toy Chest again...) 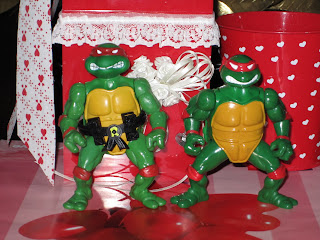 Raphael's surly attitude would be proud to know that two of his variants are featured on Toy Chest. The one to the left is first edition Raph and the one to the right was a cool variant released in '91 from the "Head Droppin" series. Let's look at his cool feature... 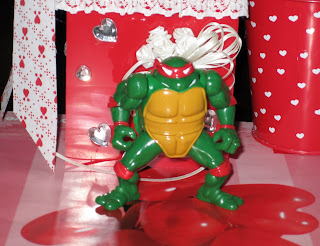 As you can see Raph's head can be pushed into his shell. Perfect for dodging kicks to the head from those pesky Foot Soldiers. 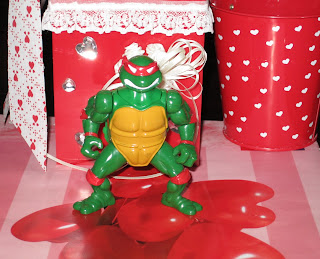 Once you squeeze his legs together his head pops back up! 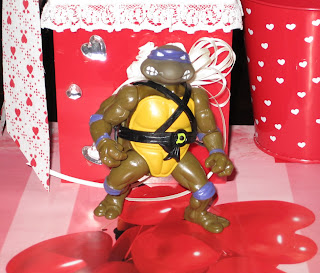 Here we have Donatello. He was the brainy turtle and one of the better options in the original TMNT Nintendo game. Has anyone actually beaten that game? I've never gotten past that dreadful underwater bomb level. Screw that level! 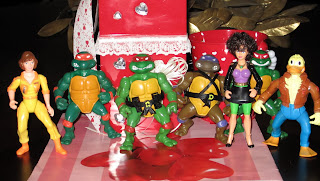 But wait! Don't go! There is more TMNT goodness though! The Turtles brought along some friends for Toy Chest Tuesday! Best Valentine's Day surprise ever! Right? 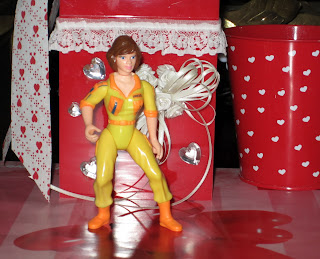 Here is one of the many versions of April O'Neil. This April looks very much like the first edition April except for the new hair sculpt and orange accents. My original April lost her legs in a freak accident with Janine Melnitz's yellow bug so thankfully I have this one! I also always wanted a yellow jump suit when I was younger. I just thought they were so cool. 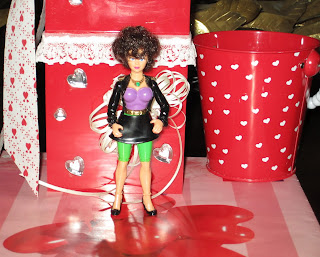 Now here is another outfit that I loved and actually used to wear a lot of in my younger twenties. I'm just kidding. Or am I? Anyways this April has already been featured before on Toy Chest (though I thought she deserved another mention) so for all her details check out April the Ravishing Reporter. 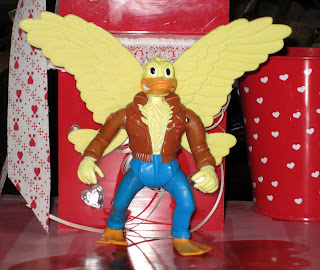 The final friend stopping by this time around is Ace Duck, one of my favorite TMNT characters. He reminded me of Howard the Duck so much. I had a crush on Howard the Duck when I was younger so this guy definitely had to be in my collection! His wings were also removeable and he came with a cool hat, not shown because I have no idea where it is.
So that is about it for this week's Toy Chest Tuesday. I hope that you have all enjoyed checking out some cool Turtle toys from Playmates. Speaking of Playmates, there will be a relaunch later on in 2012! This is why I love TMNT. Playmates has always been pretty consistent with releasing these great characters in toy form. They may go away for a couple of years, but they always manage to find their way back onto our shelves. And hearts. For more details and conversations about the new relaunch head on over to PlanetOa!
The toys of TMNT and I wish you all a Happy Valentine's Day! 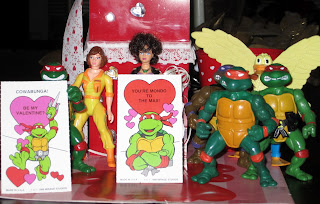