It's Toy Chest Tuesday, that time of the week where you hope that new toy smell isn't really just old and moldy. Don't you hate it when you purchase a mint vintage toy from someone and clearly the toy and its package has been subjected to water torture and it just smells old and funky? Luckily for me those instances have not occured as of late. The toy I am talking about today is in wonderful condition barring a few bumps and scrapes.
Did anyone enjoy Glamour Gals? Released by Kenner in the early '80s, Glamour Gals were dolls about the size of a G.I. Joe figure and had rooted hair. There were many Glamour Gals available and were a fun part of any toy lineup. Each Gal had a name and came in multiple outfits with fun names too. Let's take a peek at Danni in Summerific! 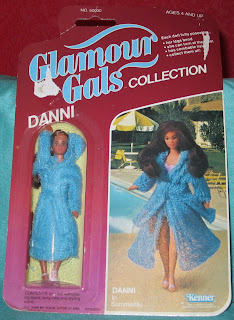 Danni is wearing a rather large blue terry cloth robe. Underneath is a lavender swimsuit with strappy wedges.

Danni also comes with a stand and hair brush.

The thing I loved about the Glamour Gals packaging was the picture to the left of the doll. It featured the doll in a real setting. This had been the first time I had ever seen a toy interacting with a real background. At the time it was typical for most toy packaging art to feature drawn photos of the toy or logo. It was so cool to see a toy interacting in the real world and not a set made up of other toy items. The whole package just seemed, in a word, glamorous. These pictures always reminded me of my soaps and Dynasty. 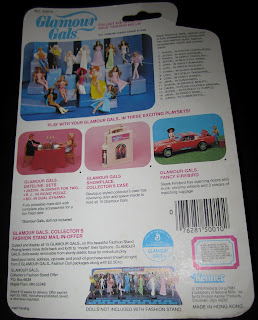 The back of the card showcased all the Galmour Gals from the first series. Three photos of playsets and their descriptions made up the middle section of the cardback. Also at the bottom was a stand for all the Glamour Gals upon turning in some purchases of proof! 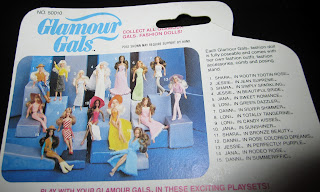 There were so many Glamour Gals to choose from! Let's look at the names-
1. Shara in Rootin Tootin Rose
2. Jessie in Jean Supreme
3. Shara in Simply Sparkling
4. Jessie in Beautiful Bride
5. Jana in Sweet Romance
6. Loni in Green Dazzler
7. Danni in Silver Shimmer
8. Loni in Totally Tangerine
9. Loni in Candy Kisses
10. Jana in Sunshiner
11. Shara in Bronze Beauty
12. Danni in Rose Colored Dreams
13. Jessie in Perfectly Purple
14. Jana in Rodeo Rose
15. Danni in Summeriffic

This part of the card showcases some playsets. There were the dreamy Dateline Sets. Each set included a male doll with some sort of date theme pieces. The picture shows Jason in Dinner for Two. Aside from Jason providing dinner there was R.J. packing a picnic. Then there was the Bo playset that had a pretty vague description, it says "Bo in Dual Dynamo." I wonder what that date entails?
The next playset was a glamorous collector's case. The case looked like a ritzy building and the clear window in the crease could showcase your favorite Glamour Gal! I've always been slightly annoyed with collector's cases. Sometimes they try to double as a cool playset but at the end of the day it is just a case. A giant tomb for a bunch of plastic.
The final playset on this card was one of my favorites, it was the Glamour Gals Fancy Firebird. Because really, Firebirds are all about the fancy. I loved how girl toylines always had a sporty type car as part of a vehicle option. Barbie has had many. Swans Crossing had one. Even Strawberry Shortcake drives a convertible. It is a giant strawberry convertible, but still!

The bottom portion of the card detailed a fashion stand mail-in offer. The stand looked pretty cool and was another way for fans to display their Glamour Gals. I also never really realized this until now but General Mills had a hand in these dolls!
Now we need to look at the lone Glamour Gal I did get to own as a kid. Since Glamour Gals came out in the early eighties I was a little late in collecting them. In fact by the time I was really wanting one Kenner had stopped releasing any new product. The majority of stock on shelves was the marked down stuff. Loni in Totally Tangerine was about it in terms of options, but I thought she was the coolest nonetheless. 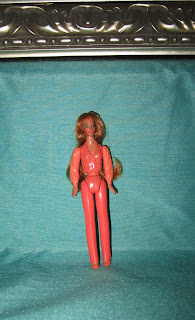 Loni reminded me of Tina Lord from One Life to Live. She was also brazen to be wearing such a loud orange outfit with that red hair. Her accessories included the stand, comb, and a large brimmed hat. Glamour Gals had interesting hats, it was usually just the brim of the hat. The crown part was missing. So decades later it hasn't been unheard of for Glamour Gals to have severe melanoma on their scalps. 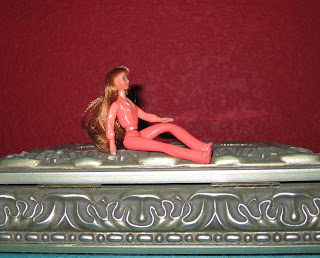 Here is Loni just lounging around looking glamorous. We can also see her legs doing their bendable best. Oh I loved Glamour Gals. When my brother and I were growing up we loved gathering all our hodge podge playsets together and creating this massive town. Our summer breaks would see us spending the whole day having our dolls and figures interact. We'd construct all these elaborate soapy stories. It was so much fun. Loni was always in some scheme involving blackmail or corporate espionage. She also got around. In a whorey sort of way. But that all changed when Betty Boop stabbed her with a pair of scissors. Betty don't play when her man wanna stray.
Anyways that is about it for today's Toy Chest Tuesday! Craving more Glamour Gals? Don't worry dear readers Glamour Gals might make another appearance in Toy Chest. There were some other really cool playsets from Glamour Gals that really taught us the important things in life. Like having a glamorous wedding or a party on a yacht. I wonder if this toyline gave Fergie the inspiration for her song? I'll be sure to ask her at the next big event. (In my dorky ass imagination.)
Posted by Michael Lynn P. at 11:00 AM