Oh March, what a month! It's that time of year when people drink beer the color of some gross fungus. Is fungus even green? This is the month when if you aren't wearing green on March 17th some grody guy will try to pinch you inappropriately. (Hey it happened to me once and once was more than enough. So now I never forget to wear green.) This is also a new month for a Heroic Hottie! And though I thought it was possibly going to be the leprechaun Lego minifigure I then planned to give the honor to Mumm-Ra. Of course after writing a full length post about Mumm-Ra being the Heroic Hottie I realized something: Mumm-Ra is far from heroic. He is a crazed villain. What was the matter with me? So after all this drama I have finally figured out who will be the March Heroic Hottie! Ladies and gentlemen let me introduce you to Lion-O, March's Heroic Hottie!

Who doesn't find a tall cat-humanoid hot? For those who are the least bit clueless, Lion-O was the main hero from ThunderCats, a popular '80s cartoon that has recently seen a much needed reboot. The basic premise of the original ThunderCats was that a race of cat people calling themselves Thundereans were leaving their homeworld and heading to a more sustainable planet to live on. (Kinda like what we'll be doing once Earth is ready to evict us.) Of course as luck would have it the evil Mutants of Plun-Darr were in fast pursuit of the ThunderCats to steal the Sword of Omens, a weapon that gives the ThunderCats immense power. Anyways long story short Lion-O uses the Sword of Omens to help fight off evil and save the day.

So let's look at some photos of the March Hottie and read on as Lion-O gives an exclusive interview to Diary of a Dorkette! You are not going to want to miss this! 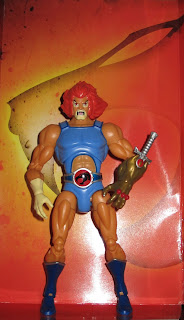 Diary of a Dorkette: I must say you have never looked better!
Lion-O: Yes I have been lucky, my plastic manufacturer recently did some work on me. I thought my old physique needed updating so I had work done to define my muscle sculpture better. I also made sure my plastic manufacturer did some leg lengthening procedures to make me taller.
D: Ouch that must of hurt!
L: It was quite painful. In fact I ended up quitting the process and going back to a shorter stature. My final piece of work though involved some O-Tox injections, which has left me with a yelling effect on my face. My plastic manufacturer says it shouldn't last forever.
D: What are your thoughts on being named the March 2012 Heroic Hottie?
L: I guess it is an honor. I thought it was going to be sooner actually. Either way my agent told me that it should give me further exposure and hopefully help with the new show's ratings. 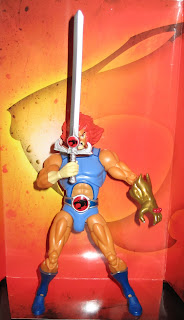 D: Let's talk about the new show, what were your thoughts when you found out that there was going to be a new ThunderCats cartoon and that there'd be a new Lion-O?
L: Well there's only really one Lion-O ya know? I was ok with there being a new show because the ThunderCats need to be introduced to new generations. I had tried out for the role that I originally made iconic, but they wanted to go in a different artistic direction. Maybe I'll make a cameo appearance.
D: Are the rumors true that you had asked the studio to develop a relationship with Cheetara in the original show and they said no?
L: It was such a complicated time back then. I wanted there to be a romantic story, but the studio thought it'd be too weird. They also didn't know how the audience would feel about a cat-humanoid species romance. The studio was only comfortable in human love stories. They were afraid of the backlash. I'm glad that times have changed.
D: This is true, the new show has developed a love triangle of sorts between Lion-O, Cheetara, and Tygra.
L: Yeah, that is the story I would have loved to play. 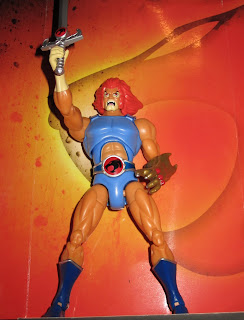 D: While looking back through your career, do you have any regrets?
L: There aren't many. I would have liked a crossover. There needed to be a huge crossover with other cartoon properties of the time. I think it would have been exciting for the fans. Plus to have the chance to work alongside the likes of She-Ra, wow. I would have been honored.
D: What do you think is sexy?
L: Sight beyond sight. Oh, and confidence.
D: Is there anyone you are currently crushing on?
L: Oh Cheetara for sure, she has always been the cat's meow. There's also that Catra chick. She is scary sexy, like she'd rip your neck out in a split second, just because she felt like it. Dangerous can be sexy.
D: Right. Ok, moving on. Do you ever see Mumm-Ra at any events? 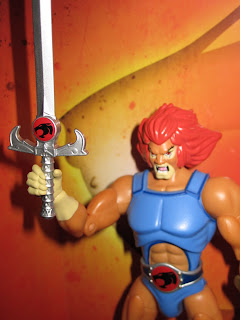 L: Every now and then. Mumm-Ra typically keeps to himself and doesn't associate with the original cast much, which works for us because he always smelled like old rotten dude.
D: Was anyone from the show really annoying, like Snarf?
L: Everyone thinks that Snarf would be the annoying cast member, but I have to go with WilyKat. He was truly the Orko of our show. Behind the scenes he had a serious problem with using catnip. The cast would catch him on the street begging for it. He would even try to sell items from the set for a quick fix. I'm glad he's cleaned his act up. 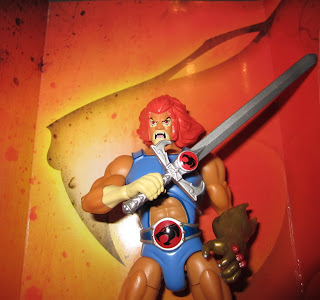 D: What are some shows that you are currently watching?
L: The new ThunderCats of course. I also really like Cougar Town. The title was a bit confusing at first. Not at all what I was expecting, but that show is damn hilarious.
D: Are you currently working on any projects?
L: Oh I make the rounds at all the conventions. I get a thrill out of meeting the fans. I've also been looking into pilot season. There has also been talk of a reality show with other great '80s toon characters picked to live in a house. We'll see what happens. I mean if He-Man can land a commercial spot during the Super Bowl surely there is something for me to do too.
D: Were the rumors ever true that you decked He-Man in the face at the 1984 Toonies? 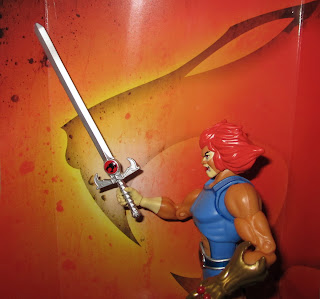 L: Everyone thought we had some rivalry, but we both respected each other's shows and what we were all there for. We never got into a fight. Now Cheetara and Pizzazz on the other hand, that was another story. Cheetara decked the hell out of Pizzazz for wearing a real fur at the '87 Toonies. The Toonies used to be such a respectable awards show.
D: Wow I never knew that. Is there anything your scared of?
L: Generally no. I don't scare easily. My only fear would probably be of no longer being relevant. I dread the day when people forget who I am and what the ThunderCats were all about. I hope our legacy finds a way to live on. I don't want us to just fade away. 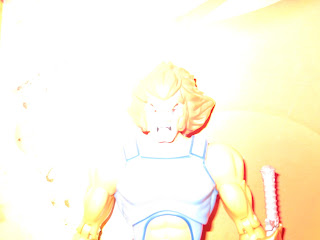 D: Well that doesn't seem to be happening anytime soon. There are still some more lives left for the 'Cats.
L: I'm glad you think so. And thanks for naming me the March Heroic Hottie. 'Bout damn time.
So that is it fans, your Heroic Hottie! I had such a great time interviewing Lion-O. And who knew that Pizzazz had an enemy in Cheetara?! Never a dull moment here on Diary of a Dorkette. So keep it here folks, there's always something new and highly dorky right around the corner. Enjoy March and Lion-O!
Posted by Michael Lynn P. at 11:29 PM