Can you just hear the theme song right now? I loved me some 90210 back in the day. I was a pre-teen so I had no clue that real life high school would be nothing like the famed Aaron Spelling television show. It didn't matter, growing up and watching 90210 I was so thrilled for high school. The parties. Going on dates with guys that looked like James Dean. (Forget the whole educational aspect of high school.) While in band during junior high we played the 90210 theme song for a spring concert, and I felt so badass and cool. I had missed the memo that I was in band. Any cool points I had went out the window.

Anyways early on in the major heyday of 90210 ('91-'92) Mattel released a line of 90210 Barbie dolls that sent my heart into a tailspin. I was beyond the appropriate age for wanting to collect Barbie dolls, but being a dorkette through and through I know that age ain't nothin but a number. I will collect my dorky stuff til I'm old as dirt and plumped up with every periodic element known to human kind. Anyways much to my parents sadness I found a way to collect some of the 90210 dolls.

My first 90210 doll was Brenda Walsh. Brenda was my favorite character mostly because we had so much in common. They practically based Brenda off of me. We both knew how to rock a set of bangs. We both had dark brown hair, and we both had the flutters for Dylan McKay. Oh Luke Perry. Sweet Luke Perry. He is a national treasure, I don't care what anyone says.

After getting Brenda at the now defunct local K-Mart my next doll to collect was Donna. I don't know why I picked Donna. I preferred the Kelly doll more because of her purple jacket. Though knowing my sad lil self I was probably annoyed with something Kelly had done on the show so I picked Donna instead. 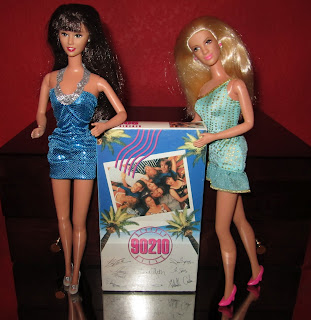 They may be in new outfits, but they are rockin' that 90210 charm!
Sadly that would be about it for my original collection of 90210 dolls. My parents were deeply concerned that my dorky ways would cause me to grow up friendless which would trickle into other areas of my social life forcing me to grow old and alone. Single, and a childless mess of misery the peanut gallery would say, "But she was such a pretty girl, what happened to her?" "She fell in the wrong crowd and cavorted with plastic dolls and toys. She was deemed untouchable."  "How dreadful!"

Anyways thanks to the modern day magic of ebay I have been able to add to the collection of my 90210 dolls. So let's get this Toy Chest Tuesday started! 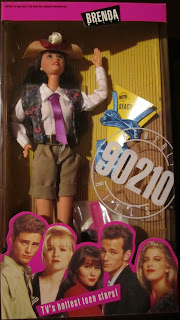 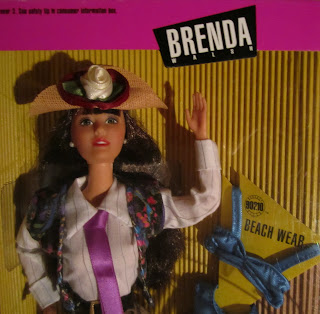 Up first is Brenda Walsh, because you all know I had to have a mint one too. The doll herself does share a slight resemblance to Brenda and portrayer Shannen Doherty. Brenda came with her school outfit and a swimsuit. A brush, boots, and stand with her name on it was also included. There was also a small cardboard picture of the character as well. 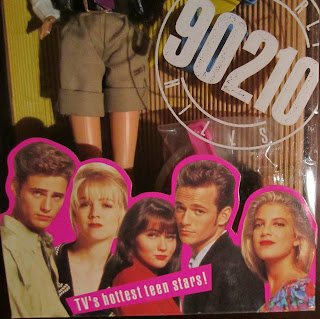 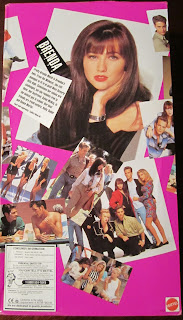 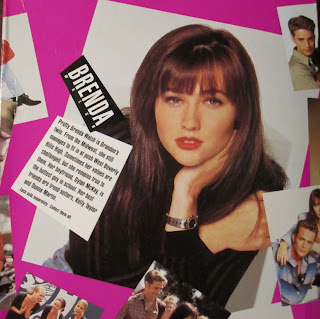 The packaging for this line was really wonderful. It capitalized on the logo and the show's stars as much as it could. They are featured all over the box, from the front to the sides, as well as the back. This was interesting because aside from the doll inside, there were no other pictures of the dolls at all. Typically Barbie dolls will feature pictures of the doll interacting with other dolls that are also for sale. Not so with this line. There was this sense that you were buying the actual 90210 character and not just the doll, which is a little creepy, but I wanted them all anyway.

The back of the box featured a larger picture of Brenda along with a description of the character. My all time favorite scene of Brenda was when Dylan and Kelly told her about their relationship. I absolutely loved it. Oh the drama! The funniest thing about this description was that sometimes Brenda's values were challenged living in Beverly Hills as opposed to the Midwest. Umm... Brenda was not some clueless girl with innocent values. She became somewhat of a troublemaker and could dish out attitude in spades. She's Brenda Walsh. 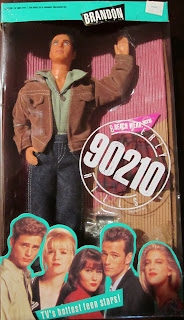 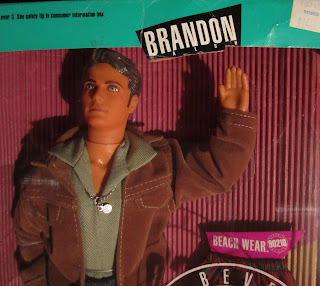 Brenda's twin Brandon Walsh became another great addition to the 90210 collection. Again we can see that the doll does share a likeness with Jason Priestley. Except this doll had a real orangey glow about it. Brandon, the doll, must have been spending too much time at the beach. The male characters were given the same accessories as the female characters. Brandon had a school outfit and a bathing suit that looked more like a pair of plaid boxers than trunks. 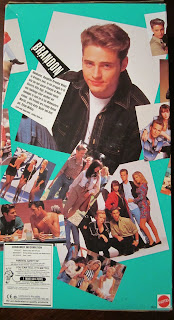 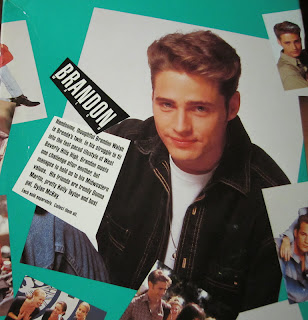 The pictures on the packaging were the same for all characters aside from the main larger photo. One thing that was very interesting about the photos was that only certain characters were shown. There was a larger group photo on the back, but characters like Andrea, David, and Steve are cut out from the photos (I am guessing due to licensing issues and who was included in the doll line.) Much like his twin, Brandon was doing his best to deal with holding onto his Midwestern values while being thrust into the world of West Beverly High. I always thought that was funny because after a couple of seasons they seemed right at home in Beverly Hills. Of course Brandon was always the do-gooder. He was like Cyclops from the X-Men, always wanting to do the right thing, be the "leader." Until he left the show.

Before Teams Edward or Jabob, there was Brandon or Dylan. There were also so many debates between my girl friends and me about who we liked more. Since I identified with Brenda so much I thought of Brandon as the kinda guy I would want for a sibling, so I never really thought he was dreamy. I just never could do it. I was always a Dylan girl. 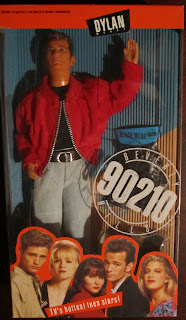 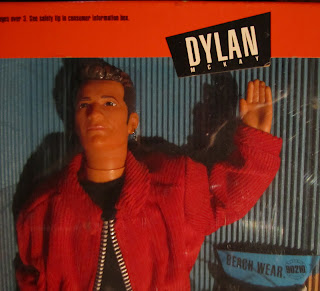 Which leads me to the final 90210 doll! Dylan McKay! Those sideburns! That scar! All was included with the Dylan McKay doll. He even had an earring. Remember when guys started piercing their ears and it became this huge ordeal about which side to pierce? Like if you pierced the wrong ear people would think you were gay. Does anyone remember this silliness? Now guys pierce both ears and just move on. My goodness how crazy the world can be. Anyways dreamy Dylan came with school clothes and some beach wear that actually looked like swim trunks and not a pair of boxers. 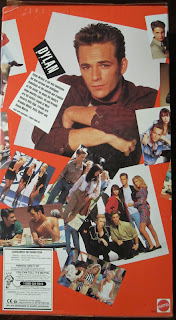 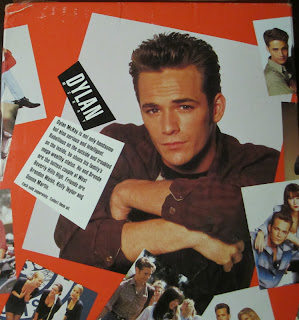 His was described as not only handsome but also serious and intelligent. I'm so glad that we all get to know that he is more than just a pretty face. Being beautiful can just be so tough. He also has the hottest relationship with Brenda... until he hooks up with Kelly. Will they ever remain friends? Spoiler alert: Brenda hightailed it after graduation. Of course the triangle would shift and evolve throughout the various years that she show was on air. Dylan would date Kelly. Dylan would leave and get back with Brenda in London. Dylan and Kelly would reunite. I just get dizzy thinking about it.

90210 was such a fun show and I'm glad a line of dolls was made to accompany the craze. These days it is a rare thing to have a line of dolls made based from a popular tv show. (Unless you are from Mad Men, and then you get really expensive Barbie dolls.) This line eventually featured playsets like the Peach Pit and a car. I even believe there were other characters in development, like Steve, Andrea, and David though I am not entirely sure of that. (Sometimes I remember things that did not happen, everyone does that right?) Either way these are a fun group of dolls and hopefully other characters from this line will be featured on this site again. (Kelly Taylor and that purple jacket will not be elusive forever!) So until next time readers, enjoy and if you find yourself humming the theme song, don't blame me!
Posted by Michael Lynn P. at 9:34 AM