I am often asked how the process works for a toy to be featured on Toy Chest Tuesday. Actually I've only been asked that once, but it seemed like a question to share with you all. The purpose of Toy Chest has always been to look at great toys from yesteryear for all their glory, awesomeness, and maybe even a little bit of cheesiness. There is a cut off though; I tend to feature toys that are at least 10 years older or more. That gives us all a great room to work with, though typically I show things prior to the year 2000 (even though today's toy will be an exception.) Anyways with that backstory behind us, let's feast our eyes on a 2001 toy, the Goblin Queen! 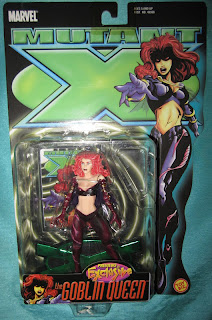 Before Hasbro took over the reigns of Marvel action figures, Toy Biz was the toy company responsible for bringing Marvel fans all their favorites. Toy Biz practically defined the '90s with their toys like it was nothing. One of their lines featured figures from the X-Men parallel world storyline titled: Mutant X. Now Mutant X was a nice twisty tale that is rather lengthy; basically Havok gets his psych swapped with the psych of another Havok in another world (Earth-1298.) If that sounds interesting, click here to find out more. 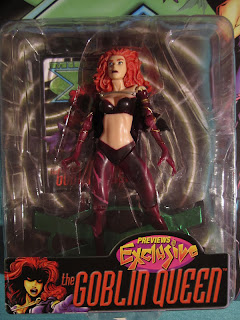 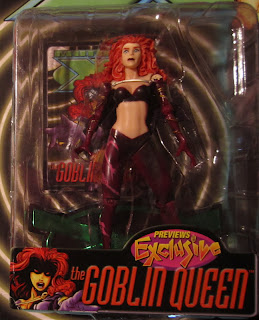 As you can see the Goblin Queen figure comes with a stand (a repaint of the Generation X stands) and a trading card. I love a good trading card. This action figure was made at a time where many advances were starting to come around in toy making. She has quite a few points of articulation that appear to be pre-cursors to what would be the Toybiz Marvel Legends line. She has articulation at her ankles as well as the shoulder points. They can open up, down, and all around. Rotation saved the toy industry. This is very interesting because the first line of figures from Toy Biz were very basic. Let's all thank the cosmos that toy design has come such a long way. I can never say that enough. 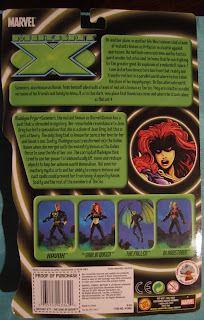 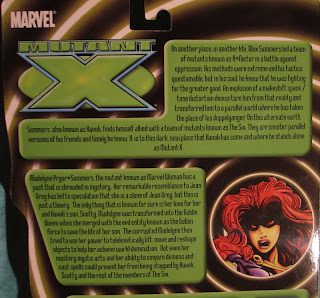 The back of the package features a few paragraphs detailing the parallel story of Mutant X with a bio on the Goblin Queen (aka Madelyne Pryor.) The back is more words than anything which is different compared to most action figures. Typically the back of a card will bombard the consumer with many choices to pick and search for in the store. This line was aimed for the collector, so there are not that many figures to choose from as well as more of an emphasis on the actual story of these collectible characters.

The other characters to collect were Havok, The Fallen, and Bloodstorm. These were all alternate parallel versions of the regular characters we have come to know. I never really cared for the other ones, I just wanted the Goblin Queen. Plus when referring to these characters, a person must call them by their actual names. I once referred to Bloodstorm as Storm once, and I thought I was going to be attacked by this dorky guy. He looked at me like I had just asked him to eat a batch of pink slime. "This is Bloodstorm." I'm so sorry!

So why exactly are we taking a look back at this figure? Well dear readers, we are looking at an endangered toy. This is the only version of the Goblin Queen in captivity. No, I don't mean that I own the only Goblin Queen, there were a decent number of Mutant X Goblin Queens made. However in a world where I can walk into a store and find 72 different versions of Wolverine on toy shelves I think it is awful that there has only been one Goblin Queen made. Especially because this version was a parallel world version! Fans of the Goblin Queen haven't even gotten her regular Earth-616 version! Oh the humanity!

The reality may be that I am the only person that even likes this character. Madelyne Pryor has always been one of my favorites. She was a clone of Jean Grey, created by the evil Mr. Sinister. Scott Summers fell madly in love Madelyne because of her resemblance to his dead lady love, Jean. A romance ensued and quickly went sour. After a marriage and child being born into the world, Scott still couldn't quite get over his love for Jean. So Madelyne did what any of us would do, she hooked up with Scott's brother Alex, among a long list of other things.

Anyways long story short, she got tangled up with some demons, and snapped a lil after Mr. Sinister revealed to her the truth about her origin. After all this she finally became the Goblin Queen, put simply Madelyne became a force to be reckoned with. Until she died while trying to kill the X-Men and a resurrected Jean. Madelyne has come back in some form or another throughout the years, but the form she needs to come back in, is plastic. I seriously want a really cool Goblin Queen action figure.

Certain comic characters can cause quite a first impression. I recall being blown away by Storm and Rogue when I first saw them in a comic. I was 9 when I first saw the Goblin Queen in a comic. It was a What If... issue of X-Men and I had never seen a female character drawn in the way that she had. The Goblin Queen's outfit has always been incredibly revealing. I grew up with Madonna so nothing really shocked me growing up, but seeing the Goblin Queen in her super low cut loin cloth and small top with a lot of under-boob, I had to ask myself, "Is that what I will look like when I am older and a lil crazy? With the power to raise goblins and demons to do my bidding?" Thank goodness that answer is no, I'd probably be arrested if I left my house dressed like that. Either way, she needs a new figure. Hasbro, are you reading? (Well you should...)

Anyways dear readers, that is about it. The end of another Toy Chest Tuesday! I hope it has been a lovely Tuesday for toys. I was actually a little concerned about posting this week's latest installment, because I believe I am reaching the allotted space for pictures on here. I am not entirely sure what I will do about that, but have no fear. Just continue to keep it here. I appreciate all those who read and I will continue to post my dorky heart's contents. Also feel free to email me missmermista@gmail.com with any ideas or suggestions for what you'd like me to ramble about. Until next time!
Posted by Michael Lynn P. at 10:33 AM