Tally-Hawk!!! Alright readers it is Tuesday. For the uninitiated this is a magical day of the week when grown folk can look back at the toys they may or may not have owned growing up and recall many fond memories. Or maybe the memories aren't very fond at all. Some toys may leave a dreadful taste in your hippocampus. We all have horror toy stories. My mom grew up in a time when Barbie was brand new and not the plastic fantastic version she is now, 50 odd years later. (Don't worry, I'm not aging my mom, she is only 36.) Back to the story, my mom had left her Barbie dolls in her treehouse and someone had stolen them! Who does that? These were the original vintage dolls! Talk about a terrifying memory! I'd probably be in therapy for life.

Anyways sometimes our memories of toys can be scary. Take for instance today's Toy Chest. Based off a cartoon and made by Kenner, SilverHawks was a line of figures that were "partly plastic, partly real." Essentially a group of heroes in the future go through some procedures to have metal bodies and hawk wings. They fly through space fighting organized crime that consists of creepy/goofy villains. One villain, Melodia, reminds me of Lady Gaga. Also SilverHawks came from the same group that brought us ThunderCats.

So why does this toy cause me to recount a terrifying memory of my own? Well here is the scoop. My biggest problem growing up was that if a toy broke I thought it was broken for good or I was to clueless to fix it on my own. As a result I was one of those neurotic children that was terrified of messing up anything. My Sea Ponies were never allowed in the bath. My Barbie dolls always loved their hair uncut. The toys I played with were involved in simple stories, like affairs and figures being pushed off balconies. Soapy stuff.

The problem with the SilverHawks figures was that their arms would come loose from their sockets. It was highly annoying and a problem I will never forgive Kenner for creating. Anyways I watched the cartoon and was thrilled to find a Steelheart (she was my favorite) on the shelves. Steelheart was the only female hero and sadly the only female figure made. Silver fans never got their Melodia. Anyway, I thought Steelheart was so cool. Except for when her arms would break.

For a few months I took Steelheart with me everywhere. With a quick squeeze of the legs her arms would flip open expanding her hawk wings. We would fly all over the place. The arms first started breaking during flight in a grocery store. I thought I was going to die in the produce section. Anyways one night my parents and I went out to a fancy restaurant for my dad's birthday. Steelheart had joined me and was happily helping me color the menu.

After dinner we all went home and were thrust into a huge surprise party for my dad. All was well, Steelheart and I were mingling, laughing, having a good time. Until Steelheart's arm fell off. The arm was removed for awhile because my parents were busy enjoying the crowd, they didn't have time to perform arm surgery. Of course no one else knew how to fix her. For the whole night I was in a state of shock, firmly believing that Steelheart was never going to be able to use her arm again. I was a mess. Oh the issues of being young. Pathetic.

So Steelheart was eventually fixed. The world kept spinning. And Steelheart eventually got a companion by way of Quicksilver. Those were the only SilverHawks I owned. So let's look at what all the fuss was about: 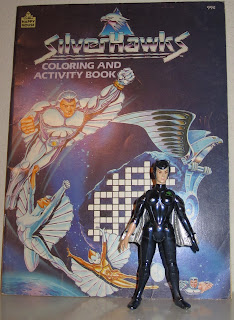 Here is the infamous Steelheart posing in front of a SilverHawks coloring book. The cool thing about SilverHawks was that they had human "skin" in certain areas and then with the process of vacuum metallizing had a really cool shiny metal finish everywhere else. I have no idea if Kenner actually used the vac metal process on these toys, but I would assume so. However I don't make toys, I just buy them and hold on to them for decades. You will be seeing me on the next season of Hoarders. (Totally joking, but I do tend to look over my shoulder in fear just in case the cameras come to my house.) Anyways Steelheart had a twin brother named Steelwill. They shared an empathic bond and had metal hearts! They also rocked out to a lot of Motley Crue. 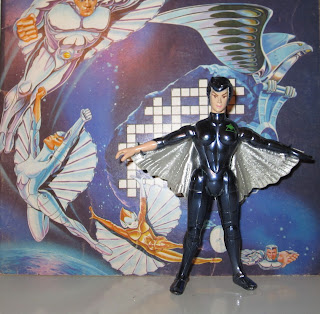 After squeezing her legs together, Steelheart's arms flip up revealing her shiny wings. They were removeable, though I never would take them off. My goodness if her wings were removed she risked losing an arm!
I do not have any of the original toy packaging, but based on the coloring book, the packaging theme was completely spaced out. I loved all the stars and solar system images. There was something exciting about what these heroes might see while flying through the universe. In any given episode there was always something kooky going on in deep space. 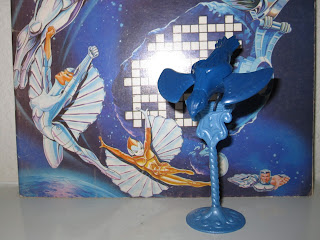 The only accessory that Steelheart came with was her weapon metal bird named Rayzor. The bird had an odd action feature to mimic that of flight and battle I guess. The wings could slide back and forth, and once that occured the bird's head and neck stuck out further.

Here we see Rayzor sticking her neck out for the Silverhawks. In actuality she is really just trying to solve the crossword puzzle on the front. 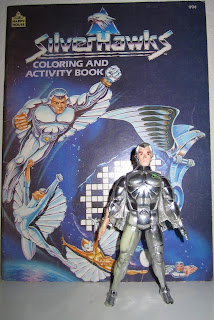 Next we have the main hero of SilverHawks, Quicksilver (no relation to the Scarlet Witch.) His right leg has not aged well, vac metal tends to rub off eventually. This is why most toy collectors dislike it when vac metal is used to accent a figure. No one wants to see their favorite figure in need of a serious paint job years later. Where would I even go for that service? If I walked into an art store and said, "His leg needs a paint job" I'd be asked to politely leave. There needs to be a store of some sort that can fix your busted toys whenever they lose paint or happen to have crossed eyes. Whatever. I sure as hell can't fix the stuff myself. I'm too busy getting paranoid that the Hoarders show is after me. 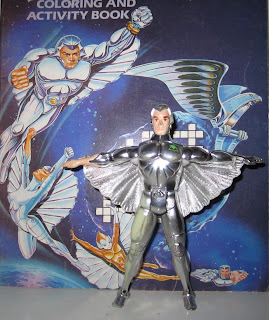 Quicksilver also shared the same action feature as Steelheart. Once his legs were squeezed together fans could see his cool wings. The other SilverHawks had different shades of vac metal as well. Quicksilver was (spoiler alert) silver. Other figures had different vac metal colors like gold or copper. Quicksilver also came with his own pet bird weapon named Tally-Hawk. Unfortunately he is missing.
SilverHawks was a really fun line. The cartoon had a great theme song that may have even rivaled that of She-Ra's. Seriously, Bluegrass was the musical SilverHawk hero whose weapon bird also doubled as an instrument. Ah the smell of '80s awesomeness. Also for those who are interested, Warner Bros. has released SilverHawks on dvd. There are two volumes and together they contain every single episode. As for any future of a comeback, fear not SilverHawks fans. The main villain, Mon*Star, had a brief cameo appearance in the ThunderCats reboot and there has been rumblings of a possible return depending upon the success of the new ThunderCats. I hope we see SilverHawks brought back in some capacity. Honestly, I am old enough to know better and should probably stop looking back to the past for my present hobbies... but... I don't care. I love this stuff. Just someone please warn me if Hoarders is out and about. I do not have a problem!
So that is about it for this week's Toy Chest Tuesday! Check back often this week as there will be even more desperate dorkette stuff for your viewing pleasure. Until next time dear readers!
P.S.
Dorky Snap Outtake!
When asked if Steelheart and Quicksilver were going to adopt any more birds to their flock, Steelheart had this to say, "Of course we are! We're practically the Brangelina of the Avian set!" Can you just imagine the smell at their house?