Oh a new week is upon us. My allergies are crappy due to pollen and ragweed. Thanks PinyPon. Anyways let's talk toys. Specifically toys that are scary stone statues by day and fearless winged warriors at night, Gargoyles! Brought to you by Kenner, Gargoyles was a series of toys based upon a cartoon of the same name. The basic premise was that these creatures were once living long ago in Scotland and were betrayed, more or less, by some hateful humans. A curse was placed and having been frozen for a really long time they were "released" in 1994 in modern day New York City. Everything always seems to happen in NYC. Gargoyles never would have taken place, in say, the middle of Montana. Ya know?

Anyways the toyline was really fun and featured many of the characters from the cartoon. Naturally I had the female characters only. The first one I got was Elisa, the NYPD officer that helped the Gargoyles. She will not be featured today. Instead we will be looking at the evil Demona, because nothing says "I'm a bad bitch" like the name Demona.

Once a member of the Gargoyle clan, Demona was in love with the main Gargoyle named Goliath. However she got spurned by her lover and with so many humans slaughtering her kind she kinda got bitter. Since then Demona's hatred for homo sapien rivaled that of even the mighty Magneto! (I smell an interesting crossover!)

Enough of the Cliff's Notes, let's look at the toy! 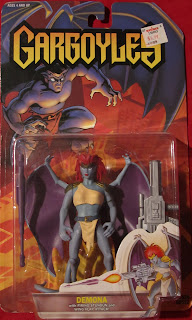 Some say the best part of a toy is the packaging. Packaging can make or break a toy. Kenner did a fantastic job of creating the right tone for what Gargoyles was all about. Dark and moody, the artwork was just perfect for this toy. Demona is inside a nice clear case with another drawing depicting the Gargal in action. Demona overall is a pretty impressive looking figure for what was being offered in 1995. Can I just say, anytime a figure comes with wings, it is a good day. Shocking red metal hair band hair is a total bonus.

Also let's look at the price tag for a second. I really miss Kay-Bee toy stores. Why-oh-why did they ever have to go bankrupt? My goodness that was the place to go to for clearance toys. This Demona had started at $7.99 and dwindled all the way down to $3.99. I miss mall toystores. 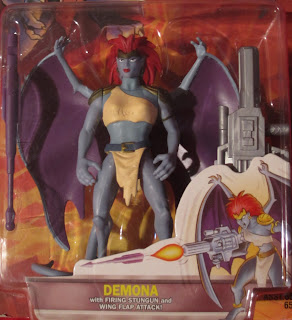 So upon looking closer we can see that some of the detailing does have that '95 charm. One eye looks a bit off and thank goodness body sculpting has come such a long way since. (Those shoulders! Dynasty called, they want their shoulder pads back.) Oh I kid. Cattiness aside, Demona also came with a firing stungun and a wing flap attack action feature. The stungun is spring loaded and can shoot the projectile with the press of a button. The best part is that Demona's wings move when her legs are squeezed together. Super fun. I also wish that there had been a variant of Demona while in her human form. During the series Demona makes a deal so that she can be alive during the day instead of turning to stone. Desiring to be a living Gargoyle 24-7 her hopes are slightly dashed once the magic deal is set turning her into a human during the day while transforming to Gargoyle at night. I would have loved her human form as a figure! Oh well. 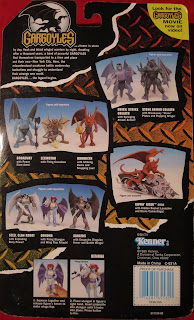 Flipping the toy over we can see that a lot of stuff is going on. The dark moody theme is still apparent along with a biker feel with the motorcycle vehicle and the background metal stuff. A brief description of the Gargoyle's story is given in the upper left corner while a list of the available figures are shown below. There is also an advertisement for a Gargoyles movie on video. 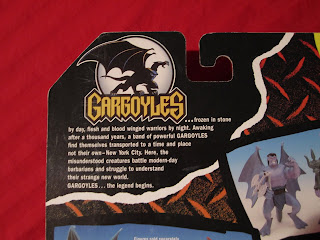 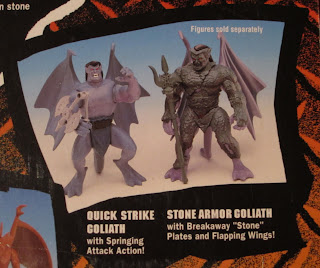 The first row of figures show two different versions of Goliath, the main character. The second Goliath was always a cool figure because of his action feature. He had stone pieces all around him for when he was in his statue form, and then they could break away when he was ready to come out at night. (I feel like that Whodini song should be on right now.) 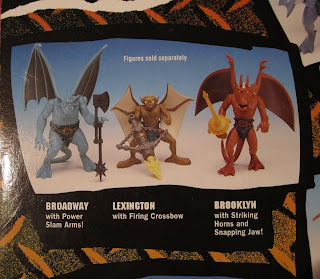 The second row were three of the good Gargoyles, Broadway, Lexington, and Brooklyn. I really thought it was cute that they had names that were associated with New York City. From what I recall with them waking up in modern day New York they needed new names, or didn't really have names to begin with. I don't know, it was so long ago that I first watched the cartoon. There were also other Gargoyles, these three were the first group from series 1. If I'm not mistaken Kenner actually ended up releasing quite a few Gargoyle action figures. 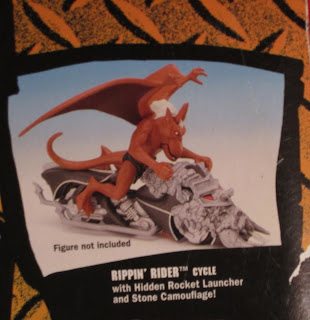 A motorcycle makes up the third row and features Brooklyn on the Rippin' Rider cycle. So here's the thing. I don't understand why a Gargoyle needs to ride around on a motorcycle. He has wings, can't he just fly to places? I mean I guess a motorcycle is faster than flying with your own wings. Having been wingless my whole life I'm not exactly sure about the level of exertion involved with flying. I just don't know. Of course it would probably be weirder if they had made a helicopter vehicle for the Gargoyles. Now that would have just been lazy. (Even though I do think there were some flying vehicles for the winged Gargoyles to... fly on.) 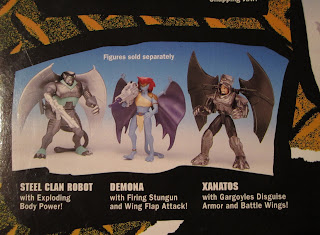 The final row featured the baddies from series 1. You've got your Steel Clan Robot, Demona, and Xanatos, the main villain. David Xanatos was a human and actually responsible for waking the Gargoyles up in New York. Having learned of their frozen statue curse problem, he threw some money around (like all rich white men do) and had the Gargoyle mansion moved to New York. And not the middle of Montana. 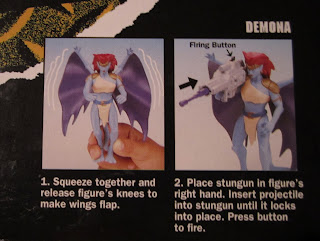 Again I really can't say enough about figures that come with wings. It is just a lot of fun. As is Demona. I really liked this toy and her character. I've made it no secret that I like a good female villain. True it seems like most female villains are bad because they want eternal beauty or some male "gone and done 'em wrong." But Demona was more than just a vain obsessed beauty or a scorned lover. She hated humans and wanted to have a part in their destruction. That's got to stand for something!

Anyways enjoy these pictures and feel free to leave comments with your thoughts and memories about Gargoyles. It was a fun line and I do hope they are able to come back to our shelves at some point in the future. I mean doesn't everything get rebooted sooner or later? Well, unless your Jem. Until next time!
Posted by Michael Lynn P. at 10:59 AM