If a zombie groans in a forest and no one is around to hear it, does it still make a sound? How about this conundrum: if someone throws up in front of a store, who cleans it up? Such was the question on my mind earlier in the week while on a visit to Barnes and Noble.

I still read magazines and books in a world where everything now appears on a tablet screen. Nothing excites me more than walking into a store to get the latest issue of Entertainment Weekly or my dearest Soap Opera Digest. Of course I don't buy every single issue of a magazine, just the ones with my favorite shows, movies, or people on the cover. (See dear readers, I'm not a hoarder.)

This week's Entertainment Weekly featured the dashing Jon Hamm as Don Draper from Mad Men. (I can't wait for the 5th season to start!) So earlier in the week I made my way to Barnes and Noble for my Mad Men EW issue. Side bar real quick... Whenever I am walking outside I tend to look down. Some would say I do that because I am odd and insecure, but I just say that I want to avoid stepping in ick. I also ramble too much. Back to the mega chain bookstore.

After risking my life on the roads with dangerous drivers I was finally at my destination. As I made my way (looking down as always) to the glorious double wooden doors of Barnes and Noble I quickly spotted a stange puddle of some sort right in front of the left double door. I couldn't tell at first, but the closer I got to the doors the more horrified I became. Someone had thrown up a huge pile of grodiness in front of Barnes and Noble. I wanted to gag and leave. Damn my desire for Entertainment Weekly and Jon Hamm.

This was early folks. The store had just opened so I couldn't believe that there was already vomit in front of the store. How does that happen? Who vomits in front of a bookstore? And a chain at that! Thank goodness I am always looking down while walking. I'll probably develope a hunchback, but at least my shoes will be clean.

Once I had safely passed the debacle out front I made my way to the magazine section completely thrilled to grab the latest EW, well, after combing through every issue first to make sure I was getting a nice unwrinkled version. (I'm picky and people are messy.) During this process there was a man standing next to me who asked why I read EW and other publicatons like TV Guide. "Because I love my shows," I replied. I also had hoped he wasn't noticing my shopping quirks. No one wants to be viewed as that person.

The gentleman proceeded to discuss the shows that he loved and how they were currently stressing him out, namely The Walking Dead. I agreed and we both discussed how much we enjoyed the AMC zombie thriller. How could anyone not? Zombies in a post-apocalyptic world always makes for good story.

Of course this is when the whole event turned tragic. At the time I had yet to see the latest episode, where he had. Desperately wanting to discuss every plot twist the episode had to offer, he suddenly was overcome with word vomit. No matter how much I said, "Haven't seen it yet, don't want to know! La-la-la-la." It didn't matter. In a matter of seconds the entire recent episode of The Walking Dead had been spewed at my feet. I felt sick. My toe nails were wearing Chanel for crying out loud! (531 Peridot in case anyone was wondering.) My feet deserved better than that. Anyway the gentleman apologized for spoiling the episode and in a flash was gone. For a second I thought I had been dreaming. It was all sadly real.

Eventually I made my way to the checkout with Don Draper in my lovely hands. With everything set and done I made my way out the door, ready to be done with the horrid store. Before I could leave another gentleman raced by me cutting me off on foot so that he could exit the doors first. This rather rude patron had no idea who I was! Or where he was walking. The yolk was on him as he walked out the doors and stepped right into the vomit outside. The grodiest thing about all of this was that he didn't even care. He kept on walking like it was nothing. I was done. "Don Draper get me the hell out of here!" I said as I clutched my magazine to my chest. I never looked back, but I made damn sure I looked down. My feet were not going to be in filth. Ever.

So my point is this, don't spoil shows for people who haven't seen them yet. It is a really crappy feeling. When I finally was able to catch up on The Walking Dead it just wasn't the same. Also don't throw up in front of a store, it is tawdry and classless. Strive to be classy. My shoes and feet appreciate it.

The zombie talk is still going to continue though! With The Walking Dead ending its second season this Sunday I found the perfect items to get us all in the zombie spirit! Jakks Pacific has made a fun line of toys called S.L.U.G. Zombies! Very similar to Mattel's C.U.T.I.E. and M.U.S.C.L.E. Men, S.L.U.G. (aka Scary Little Ugly Guys) are cute little neon green zombies with fun names! Let's look: 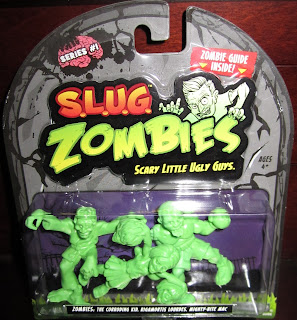 There are three zombies per pack and a large coffin pack that has 12 zombies inside, ready to eat anything that moves and has a brain. Some people in this world will find themselves safe from being on the menu, like those who don't watch Cougar Town. The packaging is completely reminiscent of C.U.T.I.E. minus the whole decayed flesh part. I'm in love! 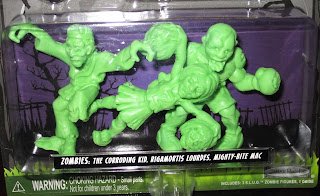 This three pack came with The Corroding Kid, a karate chopping zombie who is missing part of his leg. Rigamortis Lourdes, a zombie cheerleader with a ton of pep in her step, and zombie heads for pom-poms. Finally there is Mighty-Bite Mac, a boxing zombie that takes a bite out of any opponent. Because he is hungry. 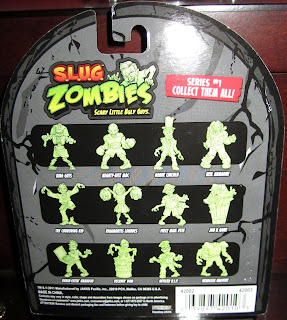 The back of the package features a listing of the other S.L.U.G. zombies for purchase. This being the first series I can only hope that there are more. I also really want to see Jakks Pacific make a C.U.T.I.E. equivalent. I can't even believe that these are being made. Why do I tend to find out about items like this at the last minute? 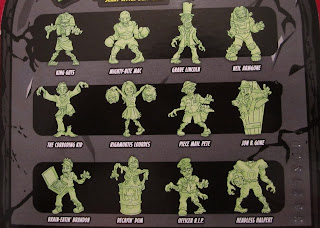 This picture shows a much better view of the zombies available for consumption. King Guts is super fun. I also like Neil Armgone. These names remind me of Garbage Pail Kids. I just love it. So run out, amass in groups and find as many as you can! The Walking Dead will end its second season this Sunday and I know these cute zombies will get me through it.
Posted by Michael Lynn P. at 1:28 PM