What a day dear readers. I'm not even sure where to begin. I was all set to discuss something cute invading your nearest toy store, but that will just have to wait. Two really great things happened yesterday, one on television and the other in my mail. You aren't gonna want to miss this!

I have been in a funk ever since One Life to Live ended on January 13th. Things just have not been the same. I was sad when All My Children ended but at the time both AMC and OLTL were going to continue online. My grief was rattled though when the online plans were scrapped and OLTL was really going to be over. Except it wasn't really over was it? I started my own personal fanfic for AMC and OLTL. Even though it has been difficult to keep the writing up, I am doing my best in my cool soap fanfic notebook. The stories are pretty good and I'm not about to stop, however I can't help but miss the real thing.

Recently though news of a few Llanview citizens moving to Port Charles helped me to feel a little happier with my lack of soaps on TV. The Mannings and moody John McBain would be heading over to General Hospital to mix things up with Sonny, Carly, and whoever else the almighty Ron Carlivati deems necessary.

Friday was the first episode featuring some of my Llanview favorites now on General Hospital and it was so good! Usually when a hyped character is going to appear or return on a soap the powers-that-be usually wait until the very last few minutes of the episode to briefly show the character cryptically removing their sunglasses or appearing from around a corner after a bit of stalking. Not so on Friday's episode. Starr Manning and true love Cole Thornhart were in the beginning of the episode all the way to the end.

Of course they broke the biggest soap rule of all, the star crossed lovers were driving in a car at night. Remember what I have said, if you find yourself in a soap never drive in a car at night. Bad things happen. And now I have no clue what will happen post car crash to Starr, her soulmate Cole, and their daughter Hope. What I do know though is that I will be tuning in to find out! Oh Todd and Blair are gonna tear some stuff up when they arrive next!

What is next? Let's see... Once upon a time there was a great cartoon starring a princess who was very powerful. She had a catchy theme song and a fabulous toyline. Sadly due to licensing issues and such there were certain characters that were never included in the toyline. Many fans often wondered what life would have been like had some of their favorites from She-Ra: Princess of Power been made, like Sea Hawk, Scorpia, Octavia or Shadow Weaver. Yes, Shadow Weaver; that evil Horde mistress of dark magic that always seemed a tad smarter than Hordak and was always willing to do whatever diabolical deeds it took to squash the Great Rebellion.

The cold truth was that many She-Ra fans were going to go through an existence where Shadow Weaver would be missing from their shelves. Sure some talented folk would make their own custom Shadow Weaver figures, but we never saw any officially licensed product. Oh the times they are 'a changin.' Thanks to Mattel's Masters of the Universe Classics line, sculpted by the incomparable Four Horsemen, Shadow Weaver has become a reality. An exclusive figure for members of the 2012 MOTUC subscription, Shadow Weaver has started arriving on collector's doorsteps.

Mine arrived yesterday and I just have to say the decades long wait has been worth it. This is the Shadow Weaver I have always dreamed about! Just perfection, plain and simple! Now the biggest issue is, should I take her out of the package or not? There are a few folks that are working real hard to set her free... 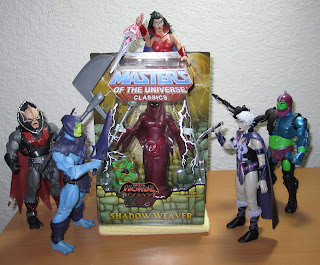 Ok that is about it for today. Be sure to check back often, I have some fun stuff to share with you all. I am working on a glamorous Toy Chest, a new Night of the Living Roach, and a special look at a new line of toys that smell so sweet.
Posted by Michael Lynn P. at 5:32 PM