Every now and then a show comes back around that just transports you to a simpler time. When having a dual identity meant being a pop rock star (with hair that looked like Big League Chew.) A time when your rival's songs were (kinda) better. That magical time when the world of soap and MTV joined forces to become a cartoon called Jem and the Holograms! Now with the entire series released all over again in a cool box set it is time for me to let you all know why this series should be in everyone's collection. Like yesterday.

I tend to enjoy purchasing most any animated show on dvd, but the folks from Shout! Factory have truly outdone themselves with this Jem dvd set. Typically animated dvd sets will have a modest amount of extras and features that make it seem worth the purchase. Up until now the She-Ra dvd series released by BCI were the ultimate. They came with special art cards and all kinds of delightful extras. However this Jem set gives She-Ra some competition. Not only is there a shiny dazzling box cover, but the episodes have been restored and appear brighter on the screen. There are tons of interviews and features, a neat video jukebox that makes it an easy 1-click process to see all the videos from the Holograms and the Misfits. The best thing of all are the toy commercials. Yes that is right, all of the Jem toy commercials have been included and look like they did when they first aired.

Now I know some of you may be thinking, "But why do I need that? I can just go to youtube to see this stuff." Ah yes. Youtube. What happens though when youtube is no longer around? (It could happen!) Wouldn't it be better to just have everything on a few discs that you can watch whenever you'd like? Along with better picture quality? It just makes sense.

So here are some pictures of the box set, the items all look so great! I wonder if Synergy had anything to do with it? (Ba-dum) 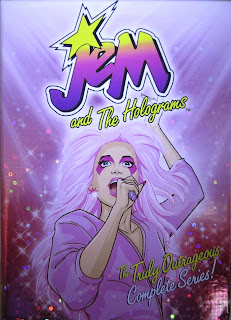 Cover of the box sleeve, it looks so cool! 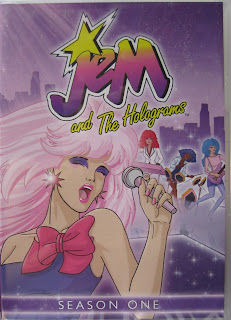 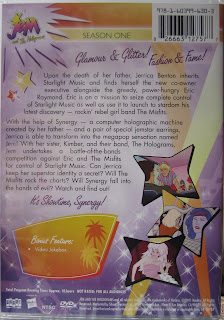 Back of the Season 1 case 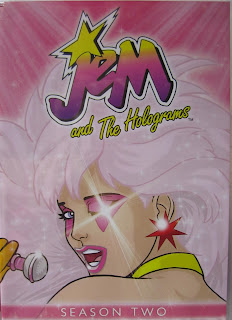 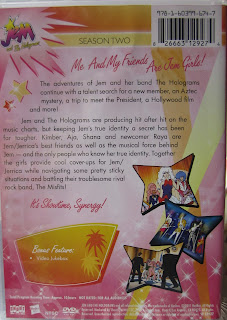 The back of Season 2 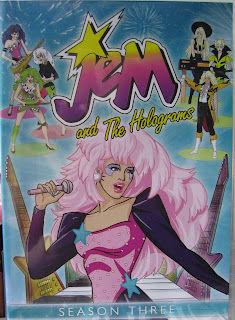 Cover to Season 3 (that introduced us to the Stingers!) 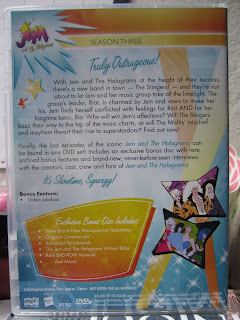 Back of Season 3
Still undecided about wanting this truly outrageous dvd set? Here are a few more reasons why this set is a must have for everyone. These are a but a few reasons that should totally leave you begging more for...

First we have the heavy social issues. Everything from illiteracy to teen drug use occured during the three seasons of Jem. These are serious issues and they should never be made fun of, but I just have to say, watching those episodes again as an adult is truly interesting. In "Alone Again" a foster girl takes a pill and in seconds starts hallucinating that her guitar is some creepy monster. After the commercial break she looks strung out big time. Messy. There isn't stuff like this on TV anymore folks.

There was also the music videos, some with truly great animation. "Gimme a Gimmick" was by far one of the best Misfits videos. The animation was stunning and created a nice feel for what was fresh and new at the time. I would even say it seems very fresh now in 2012, and we have CGI!

Of course I can't forget to mention Kimber and her drama. Throughout the entire series Kimber was either involved in multiple deadly events or busy leading multiple men on. This dvd set is worth it all if only for the episode where Kimber is hanging out in a jacuzzi in an evening gown flirting the night away.

So if you were ever curious about Jem or simply want to relive all the outrageous '80s awesomeness get this set now! I suggest watching it with friends. Throw a Jem party! Grab your favorite snacks and a drink. It will be the best night, I'm telling you. Cap it all off with a cutthroat game of Disney Princess Uno and people will be talking about it for weeks.
Posted by Michael Lynn P. at 2:05 AM