Ok so you know how some people can see Jesus on a tree or staring back at them on a piece of toast? Well I have that magical talent too, only it is not Jesus that I see. I have this ability to look at certain Barbie dolls and say, "Hey! That doll would make a great Jem character!" Or, "Hey! That doll totally looks like Glimmer." Most recently I have started seeing my favorite soap characters as Barbie dolls. Call it a very odd way to mourn the loss of my beloved soaps, I don't care. We all mourn in our own way. Some people sleep with their sister's fiance. Other people take to the bottle. I can't lie anymore. The truth is I have been collecting Barbie dolls that resemble folks from my soaps.

Today we are going to be looking at the first series of my One Life to Live dolls! Now I know these dolls are not officially licensed OLTL products, but I would be holding my breath for a very long time waiting for actual licensed items. So who do we have on tap today? Series 1 features the lovely romantic duo of a broody moody cop and one fiery tell-it-like-it-is red head. John McBain and Natalie Buchanan. Dear readers, it is about to get dorky. Prepare accordingly.

Before we look at the dolls let's look at who we are talking about. 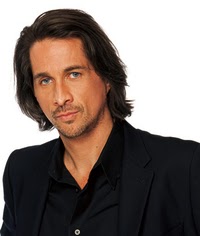 Here we have John McBain played by Michael Easton 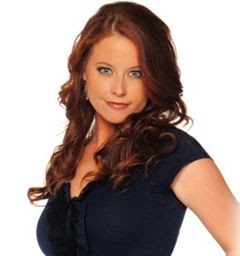 And Natalie Buchanan played by Melissa Archer
Now that we have that out of the way let's check out John McBain as a doll (oh I'm sure he'd just love this.) 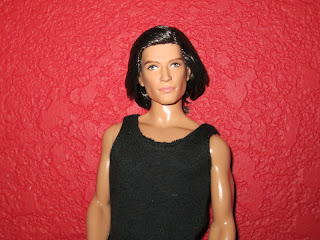 As you can see this John doll may need a slight trim (the hair is a lil poofy) but I feel that it captures some of the essence that is John McBain. He is wearing a black undershirt, though he is missing an arm tattoo... and some facial scruff. However I saw this doll and was like, "He'd make a perfect John McBain!" Right? I'm not three shades of cray am I? 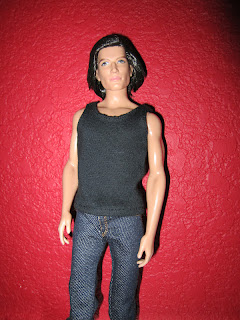 If anyone is wondering, this lovely doll is made by Mattel's Barbie Basics line. This was the denim collection so all the dolls in that series are sporting designer looking jeans along with extra sets of clothes and accessories for added fashion fun. I realize one of two things may be happening right now, some of my readers may be groaning at the fact that they are actually reading about this and other readers may be saying, "This chick is sad and loony. Get a life!" Well I assure you all dear readers, I have a life. I just really think that One Life to Live deserves some cool dolls based on Llanview's finest. 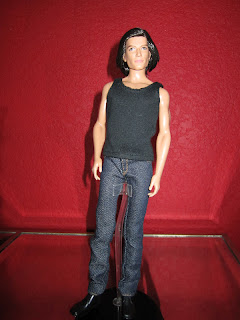 John McBain was an FBI agent before losing that title and eventually becoming a cop and Chief of Detectives on the LPD. He believes in good and is mostly stoic, but he does have one heck of a sense of humor bubbling under the surface. His portrayer also writes some pretty cool graphic novels (The Soul Stealer series and The Green Woman.) Though he has loved many women, there has only been one that has kept that mysterious heart of his beating... 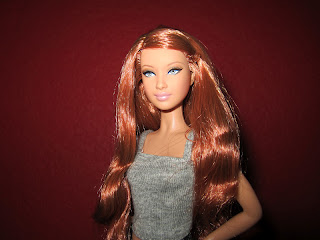 Here is Natalie Buchanan Barbie. She is the daughter of Llanview's #1 matriarch Victoria "Viki" Lord (homegirl has a long list of married last names, but those will not be addressed because I got a post to do!) Anyways I think this doll totally resembles Natalie. The shade of red may not be perfect, but to be fair, Nat has had numerous shades of red on the show. 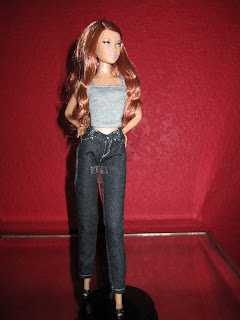 This doll is also from the Barbie Basics line. Actually there are quite a few dolls in this line that resemble OLTL characters. I really like when things like this happen. For me, buying these dolls and deluding myself into thinking they resemble soap characters helps the show live on. My goal is to have the entire cast, can you just imagine how fun that would be? The different ways that everyone could be set up? Oh the fabulosity of it all. 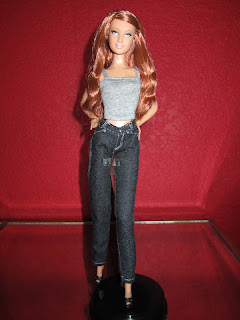 Natalie showed up in Llanview in the new century. She was the twin daughter that Viki never knew she had (really long story.) Either way Natalie is the twin sister of Jessica Buchanan and when Nat first showed up she was a whirlwind that could not be contained. Who could forget the sibling showdown she had with Jessica in 2002 that resulted in Natalie shoving Jessica through a stair railing and crashing to the floor? Even though these sisters love each other, they certainly got into some huge fights throughout the years. Oh I miss seeing Natalie Buchanan on my TV. Melissa Archer has always played Natalie with such ferocity. I love her. Go and youtube OLTL Natalie scenes now, she means business!
Natalie fell in love with some really dreamy men like Christian Vega and Jared Banks (we'll try to forget that whole Brody mess though.) Her heart ultimately belongs with John McBain. After many long years of back and forth they finally ended up together, with a baby boy too! Hopefully OLTL fans will see some more "Jolie" in the near future, what with John causing a ruckus on General Hospital. 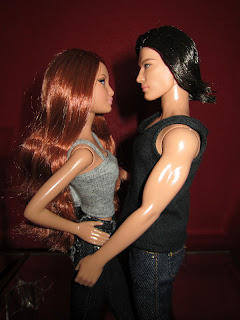 So here is to John and Natalie!
Plus word on the street (and by street I mean GH executive producer Frank Valentini) is that there will be some huge casting news regarding GH on Monday. My guess is that Melissa Archer will be bringing Natalie to GH or they will be putting Kassie DePaiva on contract. These are just hopeful wishes but I hope they come true! Also keep it here as I will be showing even more OLTL dolls in the future! They don't call me a dorkette for nothin' folks!
Posted by Michael Lynn P. at 3:34 PM