Look at what I found! Rita Repulsa!!!

Hello toy fans! Remember when I said I found something pretty surprising in the toy aisle? Something that I did not even know was being made? So here is the scoop. I am usually on top of it with the workings of the toy world. I read my sites and talk with some of the best toy knowledge experts in the universe (go to PlanetOa.net to find out) so there is usually nothing that passes by me.

All of that changed last week when I was grocery shopping at Wal-Mart. I was seriously there for a few things, mostly a quick peek at the Halloween candy that was 50% off. I mean you can never have enough Kit Kats and Sweet Tarts ok? Anyways I decided to just take a brief walk down the toy aisles. I wasn't expecting to find anything, I was truly just wanting to look. I had no ulterior motives at all, I promise.

Once down the aisle I began perusing the pegs, almost as if I was in a nice library looking for a good book. While gazing over a few things, my eyes landed upon the Power Rangers Samurai toys. Something just seemed odd to me, though at the time my brain just wasn't registering correctly. I was used to seeing the usual Power Ranger suspects, the different colored Rangers and the typical badguy. However staring up at me was Rita Repulsa, cone bra and all. I was completely shocked.

After I picked my shocked jaw from the floor, I quickly grabbed Rita up and ran to the check out. The Power Rangers toy line has been like this before, they will release some extra rare character that they make no mention of. They truly believe in making a chase figure. Some toy companies make chase figures that you at least know exist. When Bandai makes a figure chase, they make that thing a chase. For those unsure what a chase figure is, here is my description- once you have a chase figure in hand, you have to run fast to buy it, because someone will be chasing after you for it. It's a rare toy. A diamond on a shelf full of peg warmers.

So let's look at some pictures! 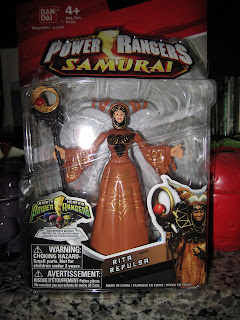 Ok here is Rita in her package. For those that don't remember, Rita Repulsa was one of the main villains from the original Mighty Morphin Power Ranger series. I have no idea if she has come back in any way, shape, or form with the latest Power Rangers series. She was always loud and obnoxious though and every word that came out of her mouth was at a scream. Actually Rita looked like she was a leftover back up dancer from Madonna's Blonde Ambition tour. Her home was in a space dumpster and she always got headaches when she lost to the Power Rangers. I personally believe she suffered from the brew shakes. Everyone loved her. 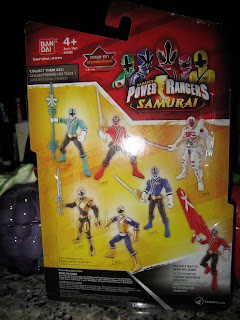 As you can see the back of her card makes no mention of Rita's existence. Can I just say as much fun as it is to find a chase figure, I actually dislike the whole idea of making a certain character super rare. It just seems unfair, because usually the rare character is one that a lot of people want. Or maybe just the hardcore dorkettes and dorks. I don't know. Either way I don't like it, even if I do usually find the stuff that is rare. Maybe I live in an area of the world where people just aren't dorky collectors like me. I would hate living in a dorky populated place. My goodness could you just imagine? There would be toy deals going down on every corner. Madness. 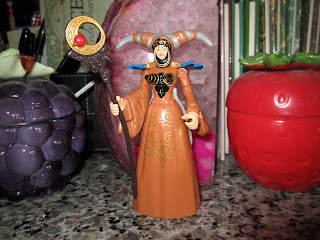 I had to open crazy Rita. I love how faithful they were to her cone bra and cone hair. My only gripe is that this toy was like 4 inches. I prefer things to be in a larger scale. Her face is so small that they gave her dots for eyes. That hardly seems fair. I'm gonna need Bandai to release a 6 inch detailed Rita Repulsa with crazy eyes and make-up please. 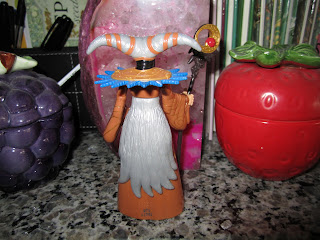 This is the back of her. Here is where I get confused. Is the gray stuff her hair, or like a long furry cape? I always assumed that her hair was all wrapped up in the cones. If that is her hair, I think Entrapta has some competition for "Best Use of Extensions in a Toy."
When Mighty Morphin Power Rangers first came out, it was an instant big deal. I liked them so much because the show reminded me of Voltron. My brother collected more Power Rangers stuff than me, but we both always hoped to see a Rita Repulsa on toy shelves. And now that wish has come true. He won't care much now because he gave up collecting toys like most normal people when he entered adolescence. However that wish coming true still means something to me. I may be cautiously approaching 30, but my inner child will never stop wanting fun crap.
Below is a picture of Rita Repulsa from the show, and I just have to say something: This is who Snooki will turn into when she gets old. Just look! I can totally see Jersey Shore's Snooki sporting a Rita Repulsa look in the far future. Or maybe the near future if Snooki keeps riding life so hard. I can see it though, and for that Snooki gets some dorkette points from me! 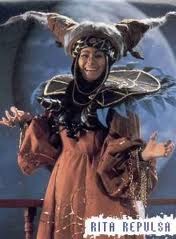 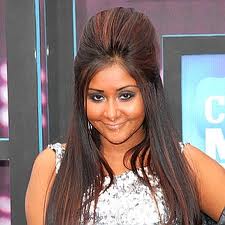 She just needs gray hair and some triangular bump-its, pop on a cone bra, and we have Snooki as Rita Repulsa! I love it! At the very least Snooki should maybe think of going as Rita for Halloween next year. How cool would that be? From one hot mess to another, she'd rock it.
So toy fans, I am done for the day. Tomorrow's Toy Chest might be coming to you all a bit late, but have no fear, there will be one! Stay tuned and good luck finding whatever chase items are out there that set your heart a flame!
Posted by Michael Lynn P. at 3:27 PM