Ok toy fans, welcome to another edition of Trashy or Timeless!! Before we get to the toy let's discuss toy scandals. As Pizzazz would say, I love a scandal. Especially a nice juicy toy scandal. Toys have been causing controversy forever. Many parents and their various parenting police groups run around freaking out about anything that might rot their children's brains. So let's take a brief walk down History Lane to look at some of my favorite and truly scandalous toys. Spoiler alert: Barbie racks up a few.

1. He-Man and She-Ra- the two most powerful siblings in the universe caused a commotion in the '80s with certain parents. The complaint was that the highly popular Masters of the Universe and Princess of Power cartoons were essentially 30 minute commercials for Mattel's hugely successful toylines. Many parents felt that Mattel was using propaganda tactics disguised as a toon to sell stuff. Umm, duh? Welcome to capitalism. What were we supposed to do back then, play pretend with dirt and sticks? Any cartoon worth its weight in awesomeness had to have a toyline attached with it. How else would the cartoons live on once the television was turned off?

2. Rollerblade Barbie (1992)- This Barbie doll's rollerblades were sparkling, creating a flicker spark when rolled on a hard flat surface. Well needless to say the sparks were a fire hazard after a child had her faced burned by the rollerblades. I am still not sure if that story was some toy urban legend or if it actually occured. Either away amidst calls for reform, Mattel changed Barbie's dangerous rollerblades and all was well with the world.

3. Teen Talk! Barbie (1992)- '92 was a bad year for Barbie. On top of having to deal with rollerblades that burned children's faces, Barbie caused some drama when she uttered the phrase "Math class is tough." Teen Talk! Barbie had a button on her back, that when pressed, spoke a few phrases. Now a talking Barbie was not a new concept, Mattel had made various versions before. However having Barbie speak a stereotypical phrase about math being tough caused a major backlash with parents. I just have to say, "Really?" I mean not to sound dumb, but math is tough. I have struggled with math for years. My goodness I went through, like, three remedial math courses in college. When an equation starts allowing letters to stand in for numbers, something is just wrong. I mean give me a break. Physics, calculus, geometry. Go play in the street math! I get it isn't right to stereotype math being hard for girls (I had plenty of girl friends that thought math was a breeze) but let's be real, math is kinda tough. For those that find it easy, I am highly jealous.

4. Teletubbies, Tinky Winky (1999)- How could anyone forget this? Poor Tinky Winky was dragged out of the closet by Jerry Fallwell and some parents were scandalized that a large purple looking creature carrying a bag was preparing to turn every living creature gay. Sometimes life gets way too strange. I was clearly way past the age demographic for this show when it aired, but I do recall the controversy it caused. What were we all thinking in '99? I realize that most of us could have cared less, but there were parents absolutely terrified to buy their child a Tinky Winky. What is a Teletubby anyway? How could something that looks like an alien promote homosexuality? That was just a really weird time. Maybe it was the impending countdown to the millenium that had everyone on edge and acting coo-coo-crazy over something so silly.

5. Barbie Basics, Model No. 10 (2009)- Barbie Basics first came out in 2009 and were aimed for the adult collector market. The dolls were associated with the Council of Fashion Designers of America (CFDA) and corresponded with accessory sets. The basic idea was for the owner to accessorize their Barbie Basics doll and create all kinds of fashionable looks. Anyways, Model No. 10 was wearing a low plunging neckline dress that had many parents calling foul. In fact there was such an outcry with this doll's chest exposure that there was a call to ban the doll from stores. Since the line was made for adults, she got to stay at the party and not be forced out. And yes, I totally have this doll. I bought her before there was even a hint of controversy, and I'm glad I did! She could become a highly sought after doll!

So anyways, I love toy scandals! Of course there are many other toys that have caused an uproar for parents. Sometimes these scandals make sense (fire hazard rollerbades are never a good thing) and other times I think people need to just chill out. With that all said, let's look at our Trashy or Timeless toy, the WWE's Michelle McCool. 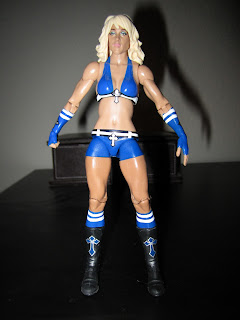 We all know about how cool I think female wrestling figures are. And Michelle McCool truly lives up to her name. First of all she is decked out in a nice shade of blue. Female wrestling toys rarely wear blue. They are usualy paired in pinks, purples, or some black/red combo. Secondly Ms. McCool is able to pose in a fun "Talk to the hand" kind of way: 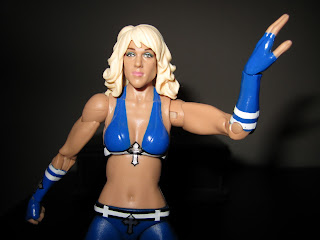 Also, look at her face. She could almost be a toy ringer for Courtney Love. Am I crazy? I totally see Courtney love though, in the face! 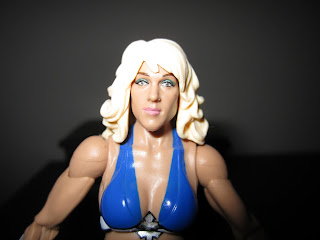 Now I don't know much about Michelle McCool except that she is Christian, retired from the WWE, and married the Undertaker. Who would have ever thought that the Undertaker would get married? And to a living breathing woman at that! I always kind of assumed he'd marry like an undead zombie woman. I mean he is the Undertaker.

Anyways, so why are we asking if this toy is trashy or timeless? Well here is the thing, let's look at the picture below: 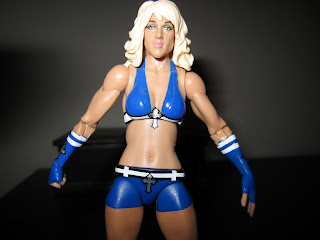 Ever since Madonna and all her shenanigans graced pop culture we technically should no longer be surprised by things, but I have to say I did not know what to think about Michelle McCool and her strategically placed crosses. Why does she have a cross between her ta-tas and on her crotch? Is she wrestling for Jesus? Or is there some new movement for wrestlers to reinact the Crusades? I'm just trying to figure it out. Of course cross-bedazzled Michelle McCool will never have to worry about a vampire trying to hook up with her. Eat that Edward.

I think the biggest thing for me though is that I feel like this should be upsetting a lot of coo-coo-crazy parents. Like where are the outraged conservative parental groups that are freaking out about a toy with a cross on her crotch? I mean hello! This toy is primed and ready for a toy scandal all her own, but there is nothing! Zip. Nada. I don't get it. People freak out when a Barbie doll wears a low cut dress but no one says a peep about a scantily clad woman decked out with crosses hanging out near her junk. What is up with the world?

I feel like Michelle McCool should be trashy, right? I mean how do you set yourself up for a scandal but deliver nothing? That alone should be the nail in the coffin of trashiness. You have to bring it or you have to just go home. Do you smell what Miss M is cooking? Ms. McCool simply could not bring it. So in effect she should win the trashy title and be voted out of the ring.

However, there are some other things going for her besides her lack of fulfilling a true toy scandal. She knows how to give good pose to a cheesy '90s saying. The word 'cool' is a part of her name, and she married the Undertaker! I would have loved to have seen that wedding, can you just imagine? I love it! So Michelle McCool narrowly escapes the trashy title and is totally timeless! Because I am certain that I will be complaining about the lack of a scandal with this toy for many years to come!