It seems like in this day and age anything that was once old is rebooted, reinvented, or reissued again. These tactics are far from new. I think of it as a circular marketing process that will continue to happen for many more years to come. However I am always curious how certain brands and toy lines get a come back while other things stay buried in our nostalgic minds. I realize there are many reasons that this happens and could range from how many people are interested in the item's return all the way to licensing issues delaying any possible release.

I wish everything could have a come back, that way I wouldn't need to balk at the ridiculous Ebay prices for those certain mint favorites. Some vintage mint items are just out of control. As much as I would love to own a mint Princess of Power Spinnerella, I do not have a thousand dollars to drop. Momma needs to eat.

Anyways growing up I was very close with a neighbor that was like a cousin. We weren't blood related, but her uncle married my aunt, so I guess that makes us family friends once removed divided by the square root of a third cousin, plus a letter. You all know math is lost on me.

So this "cousin" was just awesome. She was a few years older than me, so we played with the same toys and watched the same cartoons but she was also getting to an age where I was learning about all kinds of cool older-kid things, like the Babysitter's Club books and the Freddy Krueger films. I also learned from her about Moondreamers. Now I had watched the cartoon so I was slightly familiar with Moondreamers, but it took seeing my cousin's collection that really had me wanting some Moondreamers! Their hair glowed in the dark!

The basic premise of the show was that a group of celestial people (residing in Starry Up) helped dish out dreams to the children of Earth. Totally blows Freud's dream theories out of the water. Anyways, the Moondreamers helped build dreams (by way of the Dream Machine) and the whole works. It was a very imaginative, if shortlived, show. Of course there was a villain, her name was Queen Scowlene. She never sleeps and her purpose was to destroy the dreams of children and keep them awake at night by using her nightmare crystals. Scowlene sounds like a bitter new age hippy that just needed an Ambien. Pop one of those and just call it a day Scowlene, jeez!

Queen Scowlene also had the help of her daughter, Scowlette, and these little creatures that were called Sleep Creeps. They looked like bits of the moon and they did everything in their power to give kids nightmares. Where are more shows like this these days? I feel like the '80s really went all out in creating imaginative and off the wall cartoons. Of course I may be a bit biased.

After seeing how cool my cousin's Moondreamers were with their sparkly metallic clothes and glow in the dark fringe, I was hooked. Sadly by the time I was ready to jump on the Moondreamers bandwagon all that was really left on the shelves was Queen Scowlene and the Sleep Creeps. (The show and toyline ended faster than Kim K's marriage.) Anyways I am the proud owner of Queen Scowlene and a Sleep Creep. Yay. At first I was annoyed that I had to own yet another old evil looking woman, until I realized that Queen Scowlene and Sour Grapes could totally find a way to have world domination!

Flash forward to the presnt and my dreams have not been dashed yet! Thanks to the advent of Ebay, I manageed to win a nice new paper doll Moondreamers book. (Good luck buying any mint Moondreamers, those dolls are pricey and will sadly live on in our dreams.) Luckily the unpunched Moondreamer book was really inexpensive. I love those Ebay bids when no one else fights you for it, and things end up costing like a couple dollars. Really good stuff.

Let's take a look at the characters! 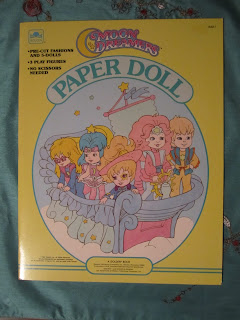 Here is the cover containing the Moondreamers all together on their floating bed ship called the Dream-along Drifter. They actually look like some New Wave band. Watch out Jem and the Holograms! 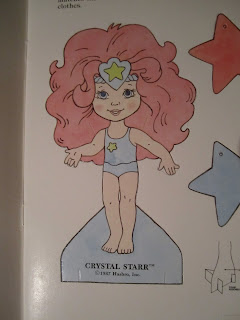 Crystal Starr was the main character. Her name reminds me of a fast food restaurant chain or something. As her name implies, she deals with stars. More importantly she makes them. 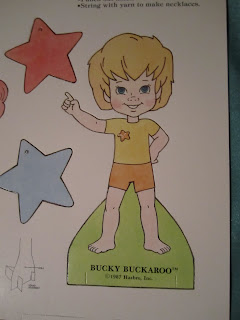 Bucky Buckaroo rides comets. He is also the only boy Moondreamer. From my understanding of his character he is like a celestial cowboy. Instead of roping in cows and what-not he is busy wrangling comets, stars, and other space hoopla. 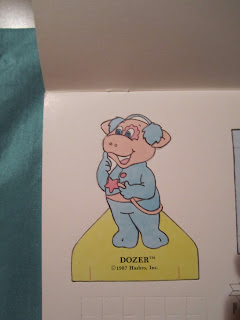 Dozer was a Snoozer (there were three in all) and he helped the Moondreamers. The Snoozer's roles were to help kids sleep and stop the Sleep Creeps. Dozer blocked awful Sleep Creep sounds by putting on ear muffs! Sounds like a smart thing to do. 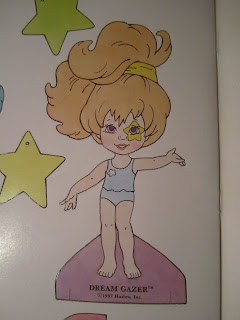 Dream Gazer from what I have read is the oldest Moondreamer. She is also filled with mystery and knows stuff, a lot of cosmic stuff. The whole business of her character reminds me of Layla Miller from X-Factor. 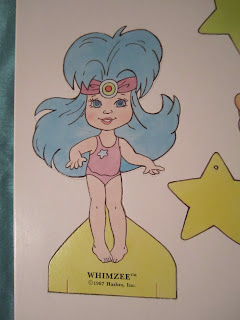 Whimzee is all about designing the perfect dreams for kids. Imagination is her tool of choice, which she wields perfectly. I like Whimzee and how her greatest power is her imagination. I wish that was all I needed to focus on, harnessing my imagination to help the world. How cool would that be? 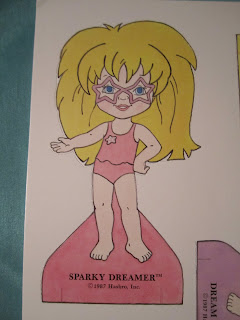 Here is Sparky Dreamer. Before I address Sparky, can I just say this looks like Pizzazz before she became the messy loud mouth lead singer to the Misfits. Does anyone else see that? And how fun are her star glasses? Tacky, but I love them. As you might've guessed, Sparky Dreamer is the brainy smarty pants of the Moondreamers. The Dream Machine was built by her as well. I love that most "brainy" cartoon characters always wear glasses, as if to say, "My brain may be smart, but my eyes suck." Where are the ditsy moron characters that also happen to wear glasses? Spoiler alert: dumb people can wear glasses too. 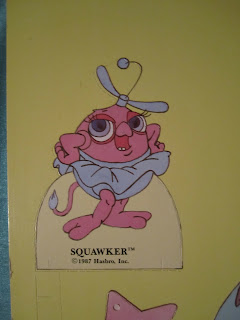 Here we have Squawker, a Sleep Creep! Doesn't that thing look like a creep? Actually she looks like she could be related to that egg spitting Birdo creature from Super Mario Bros. 2. Squawker also has some messed up snaggle teeth. Her role as a Sleep Creep was to be really loud with a megaphone, waking up children everywhere. I love how tacky Squawker is as a Sleep Creep. Could you just imagine this awful looking thing running around with a megaphone? Worse than a roach I bet. 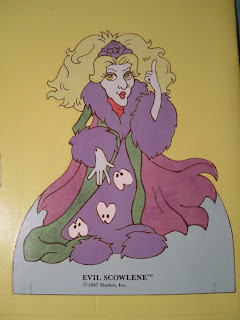 Here we have Scowlene. Isn't she a mess? Scowlene is cranky and bitter because she can't sleep. It looks like there are creatures living in her gown, which I think are actually the Sleep Creeps (now that is truly creepy.) There is also a tiny creature called a Yawny living in her hair. This Yawny thing is always pinching her awake whenever she gets tired at night. No wonder she can't sleep, she's essentially got lice. I'd be cranky too if I had critters in my hair and snaggle tooth creeps campin' out in my nightgown.
Below are the remaining pages of the book that contain all the various paper doll outfits for the Moondreamers! Behold the tacky celestial fashions that have me hoping and dreaming for this line to return! 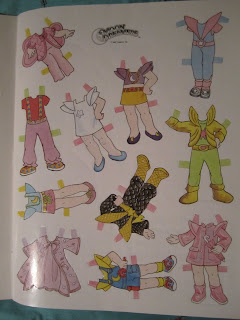 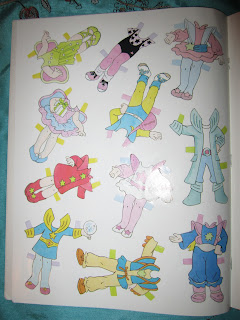 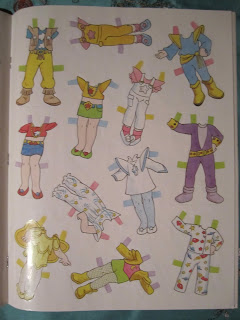 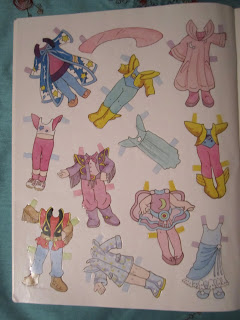 I really get a kick out of the space cowboy clothes for Bucky. I can't get over what a strange combination that is. I wonder if Bucky Buckaroo hangs out with Col. Bluegrass from the Silverhawks?
Anyways, I digress. There were plenty other characters that were a part of the Moondreamers line. I wish the show and dolls had actually lasted long enough to register on most people's minds. Moondreamers was truly a blink and you'll miss toy line, very few people recall them. The chances of Hasbro revisiting this property are likely slim to none, which is sad because there is so much that Hasbro could do. Who wouldn't want to see cool dolls in metallic fashions with hair that glows in the dark? Sign me up and call it a dream come true!
Until next time folks, good night! Sleep tight. Don't let the Sleep Creeps bite! (I couldn't resist.)
Posted by Michael Lynn P. at 1:17 AM