Hello toy fans! It is time for yet another edition of Toy Chest Tuesday! This week's Toy Chest is a fun one. I have long loved science fiction and horror movies. The Alien films have managed to combine both of those elements, among a few others, to really create some fantastic movies. Growing up the Alien creature (also called a Xenomorph) was truly creepy. The whole concept of the Alien movies completely freaked me out. Being stuck in space with creeptastic looking creatures? Umm no thanks, I'd rather deal with zombies. Growing up I loved Alien and Aliens and would rent them at the local video store a couple times a year. Anyone remember how cool the local video store was before everything became a Blockbuster and eventually Netflix? Damn changing times.

Of course I felt real hip and cool when I went to see Alien 3 in theaters. I had been too young to see Aliens when it was released (and I wasn't even born when Alien hatched in front of audiences), but I felt so cool walking into Alien 3 with my friend. My mom went with us because we weren't 17 at the time, which should technically be totally uncool. Nonetheless I still felt cool! I was watching Sigourney Weaver kicking total xenomorph butt and the whole time I was like, "If I were stuck in space with an Alien trying to kill me, I'd hope to do it with as much awesomeness as her." Clearly we know that wouldn't be true because I don't think I'd survive running from an Alien in skyscraper stilettos.

Then there was Alien Resurrection, which I missed in theaters on account that my friends in high school went without me. I wouldn't end up seeing AR until it was available for rent. I actually really hated the fourth Alien film, and even wrote a scathing review about it on my old blog. However in retrospect I was merely having a white girl moment for being upset that my friends originally went without me. After watching the movie a couple more times it wasn't that bad. There were parts that I really liked! Who knew a swimming Alien could be such a threat? Now if only there had been a scene of synchronized swimming Aliens...

What made the film even better was the accompanying toyline! Actually the Alien Ressurection toyline was not the first set of Alien toys. Kenner had released a really cool line of Alien figures in the early '90s that was based off of an Alien vs. Predator video game. This toyline was so cool to me. At that time, dorky folk couldn't go to the store and find toys based off of their favorite scary sci-fi films. At least to my knowledge. I realize there was an old Alien toy from the late '70s, but seriously I don't recall there being a time in the early '90s where a popular line was tackling characters from scary movies.

Needless to say having Alien toys was so cool. I think every girl grows up and dreams of owning her very own Ripley and Alien Queen. I mean how else can one reinterprate the great classic stories of the past? Actually owning the Alien toys probably helped deter me from having a love life by at least ten years or so. Anyways I will not be showing you all the Alien toys from Kenner. Those fun toys are in a big pink plastic crate in my archival room. However we will look at the line Kenner did for Alien Resurrection. 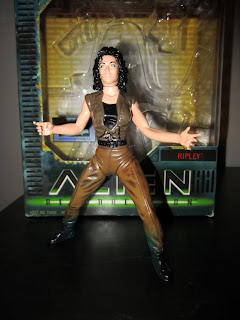 Here is Ripley and the box she came in. She is planning on going to the gun show. 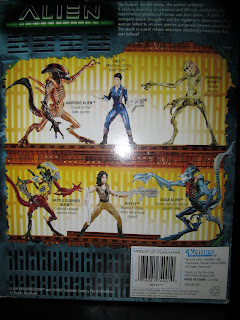 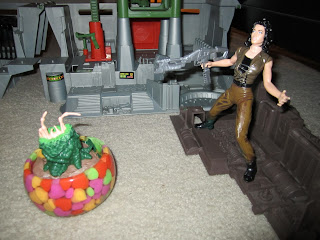 Ripley facing off with a hatching face hugger! (It is common knowledge that Face Huggers like to hang out in plastic heart bangles!) 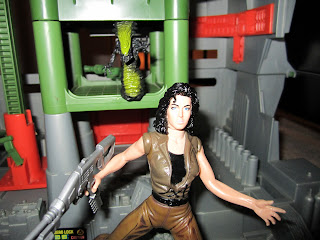 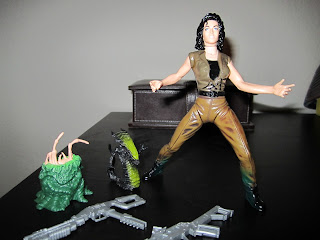 Ripley came with two weapons, a face hugger hatching out of an egg and an Alien. By looking at this figure, which was made in 1997, we can really see how far action figures have come. I would love to see some updated highly articulated Alien toys from Hasbro. That would be so much fun! Wouldn't it?
Now I am sure some of you are wondering, "Miss M, why on Etheria are you so thrilled about Ripley?" Here is the thing, I really grew up looking up to Sigourney Weaver's Ripley. When watching those films, I felt that I could be a real badass too. Honestly, I was the furthest thing from a badass chick back then. I was one of those goofy awkward girls. I mean Sigourney almost made me want to shave my hair when Alien 3 came out. I realize I'll never have the chance to tell Sigourney how cool she is. Or even let her know that her role in Gorillas in the Mist was truly gut wrenching. Seriously, I can't watch that movie without breaking down. So anyways, having Ripley is like owning a piece of the excitement that is those Alien films.

That is about it for this week's Toy Chest! I hope all you folks are doing well! This week has been Stretchy Dress Week for me as I prepare to deal with Thanksgiving. Let's just hope this year won't see me with swollen knees from too much sodium intake like the Great Thanksgiving of '05. Truly a hot mess.
Posted by Michael Lynn P. at 9:38 PM