Ok toy fans! According to my math (and I hope my math is good) this is my 50th post! What better way to celebrate such a fun occassion than looking back at some of my favorite toys! This is actually a difficult post to make because pretty much everything I own is my favorite. However i will do my very best.

First is Masquerade, from My Little Pony! This lovely My Little Pony belonged to the Twinkle Eye Ponies which came out during the fourth year of the Generation 1 Ponies. They had sparkly gems for eyes, streaked hair in all kinds of colors, and a rainbow comb. I even think they came with a sticker of some sort, either way they were super fun! 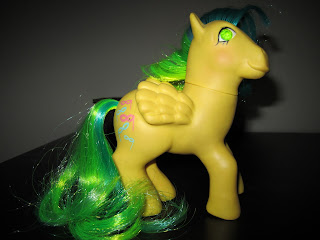 I know nothing of Masquerade's character, only that she was a yellow pegasus with masks for her symbol. This was my first pony, and I remember having such a difficult time picking my first My Little Pony! I wanted a pretty pink one, but there was something so cool about Masquerade that I swore off wanting something in my signature color and picked the yellow Pony instead! 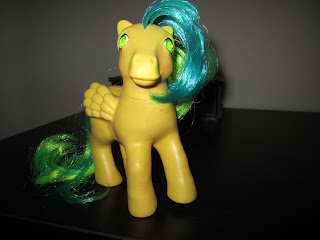 Looking back now the twinkle eye aspect of the toy is actually kinda creepy. I mean who would really want sparkly gemstones for eyes? That just creeps me out. How do you even see? It gives me a headache just thinking about it.
Next up is from the fun toys by Galoob called Sweet Secrets. These toys were a girl's answer to Transformers. Granted many girls loved Transformers just as much as any boy, but Sweet Secrets was so much fun. This Sweet Secret was from the Rock 'n Lockets line where certain musical instruments turned into punky new wave looking people. They also could be worn as bracelets and each Rock 'n Locket actually played music! 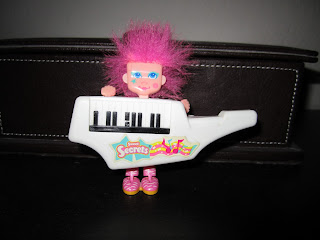 This Sweet Secrets name is Tickle A. Keyboard. I have no idea if her music can still play, but how we reunited was very interesting. I have long searched for this old toy, for far too long. This story occured a few years ago. I was helping my mom in the kitchen. We were going through the kitchen cabinets and trying to find old antique plates and all kinds of other stuff on the very top kitchen shelves that had not been used in a long while. Well I was taking some old plates down and low and behold, Miss Keyboard was just loungin around on a plate!
Apparantly ages ago I did something incredibly rotton to annoy my mom and as punishment she took the Sweet Secret and placed her in the cabinet! Well we both forgot about her when I finally decided to act better! Who would have thought I'd find her so many years later? This makes me wonder what else I owned that got taken away and hidden somewhere! What a mess. The saddest thing of all is that I have so much old crap that there is no telling where everything could actually be.
Moving along we are going to take a nice look at probably one of my favorite Princess of Power toys ever. Mermista! I loved this toy so much. I still do, even if her hair looks tore up. And maybe her head broke off and is now super glued on, but whatever! The toy is still good! I worked a deal by using bribery on my parents for this one. Here is the thing about me, when you grow up idolizing Erica Kane you learn how to master the arts of blackmail, bribery, and anything else I needed to know about getting my way at the age of 4. What do you expect? I really needed a Mermista!

She came with removeable fins that you could slide on her to turn her into her mermaid form. I loved that a toy could do that! Like I have mentioned before, I have always loved mermaids. Mermista also came with a little seashell piece that attached to her back. When filled with water the seashell would squirt a blast of water from the necklace around her neck. I mean I don't know how powerful that would be against Hordak, but in my She-Ra fanfic Mermista is one of the most powerful members of the Great Rebellion! I'm a dorkette that keeps it real! 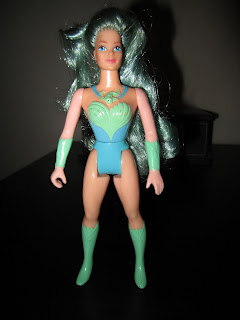 Our last toy is another "first." This is Day-to-Night Barbie, my first Barbie doll! Now I know this seems odd, but the pictures of the doll below are not the actual Day-to-Night Barbie I owned as a kid. That doll is in my archival room sporting a newer outfit. (I may be real dorky, but I wasn't keeping my stuff mint back in the day.) Anyways I came across this doll by chance really. I had bought some vintage Astronaut Barbie dolls from a seller on Ebay. The dolls were mint and looked perfect, even the descriptions had nice things to say.

What I ended up getting though was a hot mess. The dolls smelled so bad, they were hardly in the condition that the seller had described. I had the option of returning the items, but I just kept them. I threw the packaging away and thoroughly washed everything. It worked, everything ended up somewhat well with the world.

So I was incredibly nice to the seller. I wanted to get so mad and yell, what kind of person sells grody Barbie dolls like that!? Just eww. However I was friendly. Weeks after the whole experience went down, I received a package in the mail. This Day-to-Night Barbie doll. I had no idea why I was receiving this. For a second I thought I had maybe sleepwalked in the middle of the night and bought a Barbie doll on Ebay. I was really fearful that I was losing my mind or something.

The address on the package looked familair so I contacted the Ebay seller that sold me the Astronaut Barbie dolls. Sure enough she sent me the doll as a way of saying, "I'm sorry you had a crappy experience with my items." I thought that was very kind. I mean the box is kind've messed up, but nothing smells funky. I was really surprised by that. And people say kindness is dead. Ha! 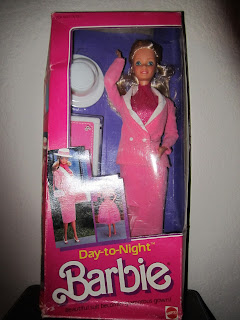 Day-to-Night Barbie was awesome. She had her day clothes on, basically a nice pink office skirt suit. All that was needed next was to take the jacket off and flip the skirt around and Barbie had a fun night time look. I loved playing with this doll. I would always pretend she worked in some high rise office making deals and yelling at people. It was all very Knots Landing. I had so much fun. 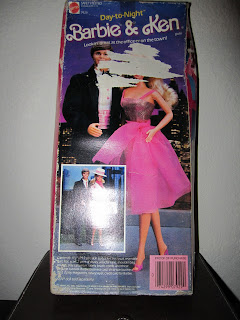 The back of the box has seen better days. But you can see some of her fun night oufit. A total pink ensemble, the best! I mean I learned so many important lessons from this Barbie. Like how to wear something nice to work, only to remove a few articles after hours and be totally ready to look fun and flirty. I also learned that I should never dye my hair blonde. (I looked a hotter mess than those Astronaut Barbies) We all make mistakes though right?
Whew, what a long Toy Chest! Enjoy the pictures and keep it here! I think it has been awhile since we saw a Timeless or Trashy piece. It should be really good! I'm thinking we should look at another wrestling figure? Stay tuned!!
Posted by Michael Lynn P. at 10:08 PM