Ok toy fans, Halloween was a trip wasn't it? Paris Hilton dressed as She-Ra. Kim Kardashian filed for a divorce (even an Erica Kane marriage lasts longer than that mess.) I mean what is going on? As much as I want to discuss those topics, I won't. I am not even sure I know where to begin with Paris as She-Ra. Maybe we can save that for another day.

Let's talk about the real important things. Toy Chest Tuesday! And in honor of the real Princess of Power, I thought it'd be fun to take a walk down memory lane and check out Scratchin' Sound Catra! Catra was She-Ra's ultimate nemesis. That is, until Shower Power Catra came around. Catra was considered the "jealous beauty" because she hated everything about She-Ra. She-Ra had the looks, the man, the pink castle made of crystal, poor Catra was just livid by it all.

So during the second series of POP toys, Mattel decided to make Catra even more menacing. They gave her a new scratchin' sound and striking outfit. This variant was not to be trifled with. She may have never gotten Bow, but she did come with a comic. So let's look at some pictures! 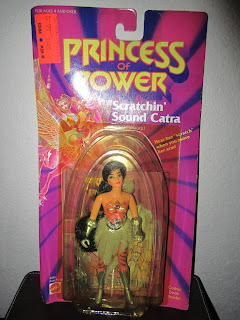 This packaging should look familiar, it is the same as Entrapta's packaging from a few Toy Chests ago. This Catra variant also sports a skirt made of what looks like tattered pelts. Her silver boots and face had new designs. Scratchin' Sound Catra also sported the coolest pair of leggings ever, tiger striped! I want some so bad. The packaging also describes Catra's new action feature- Hear her "scratch" when you move her arm! The better to attack She-Ra with of course! 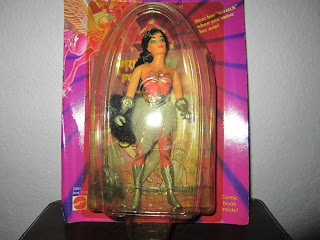 Here is a closer picture. As you can see, her face is much prettier than the first Catra. Her eyes are also really green, let's hope she never crosses paths with Lo Pan! Though I do think that would make an interesting fight... 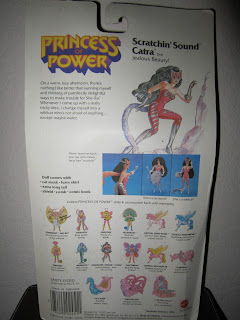 Here is the back of the card. At the bottom are the usual suspects from the Series 2 POP characters. However, what's up with that picture of Catra? Let's put our Nancy Drew skills to the test and find out! 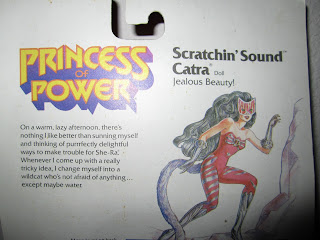 Ok, I am not sure what the picture is about, but I love that Scratchin' Sound Catra looks ready for the disco. The disco has got to be on top of Skydancer Mountain and she is clawing her way to the top to make sure she has the first dance with Bow. Only he will be sipping drinks with She-Ra, and Catra will just be enraged and jealous. I'm envisioning a cat fight on the dance floor. Here is her actual bio-
"On a warm, lazy afternoon, there's nothing I like better than sunning myself and thinking of purrrfectly delightful ways to make trouble for She-Ra. Whenever I come up with a really tricky idea, I change myself into a wildcat who's not afraid of anything... except maybe water."
I love how Catra lounges around devising plans to make She-Ra's life miserable. Such a bee-with-an-itch. The perfect villain! 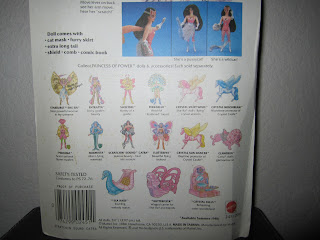 There were also some pictures that explained how to use Catra's action feature, i.e. how to transform her from a pussycat to a wildcat. I'd imagine that turning into a wildcat must be easy, just drink some booze at the disco and I'm sure Catra's inner wildcat is ready to pounce.
I also want to show you all a little something. This next picture makes me want to cry just a little bit: 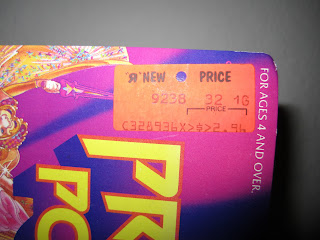 Do you folks see that? Once upon a time this Catra was sold on the clearance aisle at Toys-R-Us for $2.96!! What? I wish I could time travel. Because $2.96 for a Scratchin' Sound Catra is just too good to be true. Ah 1984, it was the best of times, it was the worst of times. I don't think we'll ever see a Scratchin' Sound Catra for $2.96 again, unless she is loose and missing an arm. Or two.
Anyways so that is it for Toy Chest Tuesday! Be prepared for the rest of the week, there are plenty of great things coming up! And hopefully if Paris Hilton ever finds her way to this blogspot, I would be more than happy to share my knowledge of She-Ra with her. The poor dear thought She-Ra dated He-Man. Incest is soo not cute.
Posted by Michael Lynn P. at 8:42 PM