Ok toy fans, we are approaching a new year. I can't believe December will be here in a couple days followed by the new year. The temperature has already started dropping and I have pulled out my semi winter best. It is also Tuesday, so you know what that means. Drum roll please... Toy Chest Tuesday! In my mind there are fireworks and explosions of joy that go off marking such an exciting day of the week. I have no life.

Anyways, let's look at what we have on tap today. Order your pizza now Turtle fans because we are looking at an April O'Neil variant from the Teenage Mutant Ninja Turtles toyline by Playmates. Now there has been a debate raging in my head about whether this toy should actually be featured in a Trashy or Timeless post, but this toy could only be considered timeless. Hence the special honor of being a part of a Toy Chest Tuesday. So let's take a look!

Here we have the front package of April, The Ravishing Reporter. 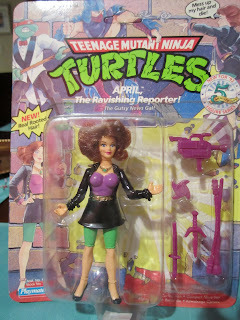 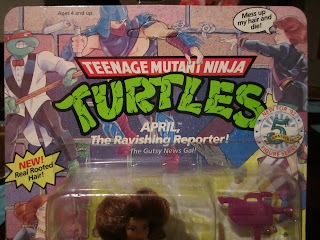 As you can see she is the gutsy news gal. There are cool pictures all around the package. April is throwing some ninja stars at Shredder saying, "Mess up my hair and die!" She has priorities. And she comes with real rooted hair. We'll get to her 'News Gatherin' Gear in a second. Let us instead look at April. She has a lot going on. 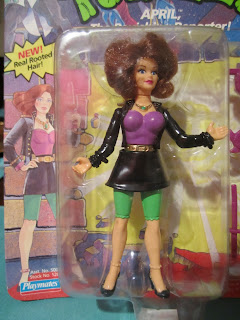 First of all I think she has been stuffing turtle shells in her top. And she is rockin the leather jacket and mini skirt combo. Of course nothing is as good as all the gawdy '90s jewelery. This gal does look a little Pretty Woman-esque, but isn't that part of the fun?  I'm sure if reporters looked like April more people would tune in to the news. Just imagine if news reporters were also trained to fight Foot Soldiers and evil? I would do my best to become a news reporter and kick butt live at five!

Another cool thing about this figure was that it marked the 5th Anniversary of Playmates Turtle toys! This April was all new for '92! Who would have thought that the 5th Anniversary of Turtle toys would see fans clamoring for a Ravishing Reporter April? Actually I don't know anyone that wanted this toy. I remember freaking out with the ultimate form of giddiness when I saw her. My original Ravishing April is living in the great big pink crate in my archival room, but I was lucky enough to find a mint one at my local comic store. For 7 dollars! Some would say I paid too much for this, but I think I got a deal of the century!

Let's move along and look at the back of the box: 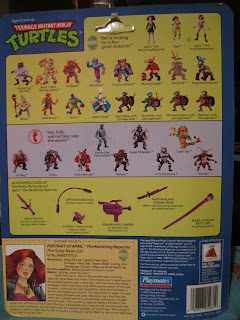 There were all kinds of strange and fun characters to collect from the TNMT line. 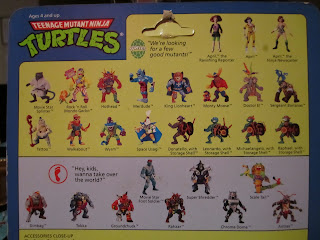 Merdude seems like a lot of fun. I bet he would do his best to woo Mermista. I think she'd have more class than him, but who knows. Everyone needs love. Right? In terms of badguys, Groundchuck and Antrax are really cool. Everyone should want a giant red bull that looks like he was in the process of becoming a McDonalds menu item. I never really had all these characters, which is fine. I only collected the April variants anyway.

It is time for the Accessories Close-Up! This version of April came with some really ravishing items. 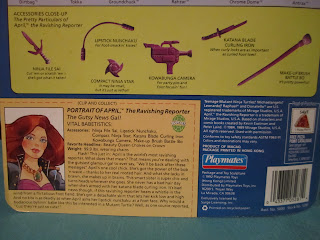 Those items included:
Ninja File Sai- Cut 'em or scratch 'em- she's got what it takes! (Yeah, to fight dirty! Catra would be so proud.)
Lipstick Nunchaku- For Foot-smackin' kisses! (Sounds kinky and kinda gross!)
Compact Ninja Star- It may be small, but it's just as lethal! (Or maybe it's Maybelline. Seriously, Maybelline needs to make one of these.)
Kowabunga Camera- For party pics and Foot focusin' fun! (It predates the digital camera!)
Katana Blade Curling Iron- When curly locks are as important as curled Foot toes! (I don't know what that means, but it sounds grody.)
Make-Up Brush Battle Bo- It's pretty powerful! (I think it should've read, 'It's pretty powderful.' That would have been infinitely cooler.)
This toy has got to have the coolest accessories! Right?

Now we move along to the final and arguably best part of the package, the bio card! 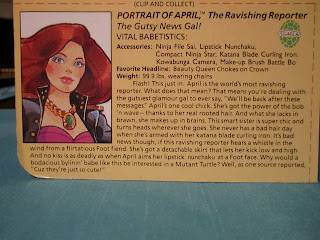 This bio card is a damn mess. I love how April has "Vital Babetistics." April's favorite headline is: Beauty Queen Chokes on Crown. That sounds like a good story just begging to be made into a comedy. Here is the thing I have an issue with though. Her weight is 99.9 lbs. wearing chains. There is just a whole lotta wrong with that. First of all if she were 99.9 lbs. Casey Jones would break her. Let's be real. So April, please eat a pizza for crying out loud!

Check out the actual bio. Here are some of my favorite quotes:


"She's got the power of the bob 'n weave- thanks to her real rooted hair." (Never underestimate the power of good hair.)
"It's bad news though, if this ravishing reporter hears a whistle in the wind from a flirtatious Foot fiend." (What?)
"She's got a detachable skirt that lets her kick low and high." (Hookas at the point ain't changed! That's all I got.)
So there ya go, April, the Ravishing Reporter! You gotta love her. Hope this Toy Chest sees you all well. I am off. Ebay is having a deal today where a seller can list 1,000 free items! I need to bring it. Momma needs to eat!
Posted by Michael Lynn P. at 9:40 PM